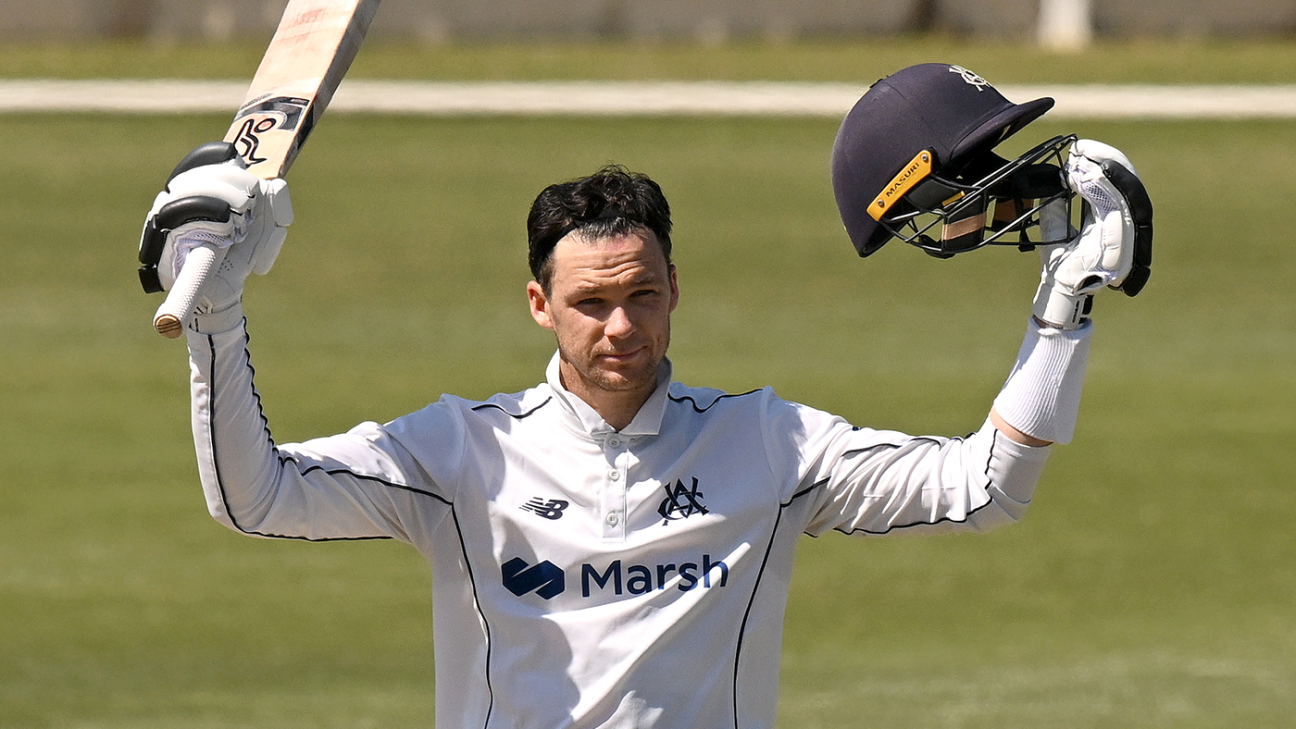 Western Australia 466 (Bancroft 100, Short 87, Whiteman 82) and 5 for 185 (Cartwright 76*, Murphy 3-42) drew with Victoria 4 for 616 dec (Handscomb 281*, Harper 132, Harris 111)
Peter Handscomb’s selfless declaration spiced up the final day of Victoria’s Sheffield Shield clash with Western Australia before Hilton Cartwright piloted Western Australia to a draw.
The Victoria captain declared at 4 for 616 at lunch on day four at Junction Oval, leaving him unbeaten on 281 and his side with a 150-run lead and two sessions to concoct an unlikely victory.
His call had an instant impact with WA falling to 3 for 19 in 50 dramatic deliveries as the visitors tried to bat out the final two sessions for a draw.
Cartwright and Josh Philippe took them to tea without further loss to allay some fears, before two more wickets to begin the final session again breathed life into the contest.
But D’Arcy Short joined Cartwright after Todd Murphy’s third wicket came courtesy of a dubious lbw call on Aaron Hardie to push the visitors past Victoria’s first-innings total and prompt an early finish.
Murphy took six wickets for the match and found something in an otherwise lifeless pitch, while Cameron McClure had success with the short ball on the final day.
Todd Murphy gave Victoria a chance of victory•Getty Images
Handscomb, who scored a century in the season opener, crushed WA’s spirits before breaking a long-standing record held by the late Dean Jones. It was the highest score by a Victorian against WA, bettering the previous record of 243 held by Jones (1984-85) and Will Pucovski (2018-19).
The 338-run stand between Handscomb and Sam Harper was Victoria’s highest fifth-wicket partnership, bettering the previous mark of 316 set by Grant Gardiner and Laurie Harper in 1997.
Handscomb – dropped twice on Wednesday – started the day on 174 and brought up his double century by flicking Lance Morris to fine leg. He reached 250 just 35 balls later.
It followed a century in the season opener from the man who scored the most Shield runs in 2021, but played the last of his 16 Tests in 2019.
It presents a compelling argument for a recall during the home Test summer, while a tour of India early next year also looms as a target – not that Handscomb is thinking about it.
“I’m feeling good, but that’s always one of the things you’ve got to be careful of with Mother Cricket,” he said. “As soon as you do (feel good), things go the other way. So I’ll just keep doing what I’m doing and hopefully continue to score as many runs as possible this season.”
WA had the ball reversing for a bulk of the innings, Cartwright applauding the record stand between Handscomb and wicketkeeper Harper
“That’s right up there; he negated everything we threw at him, made us think outside the box,” he said. “It was a masterclass how they batted in those conditions. [We’re] happy not to lose the game…they got on a run and thankfully we were able to stop that.”
Tags: Hilton Cartwright, Peter Handscomb, Sam Harper, Sheffield Shield, Todd Murphy, Victoria, West Aust vs Victoria, Western Australia