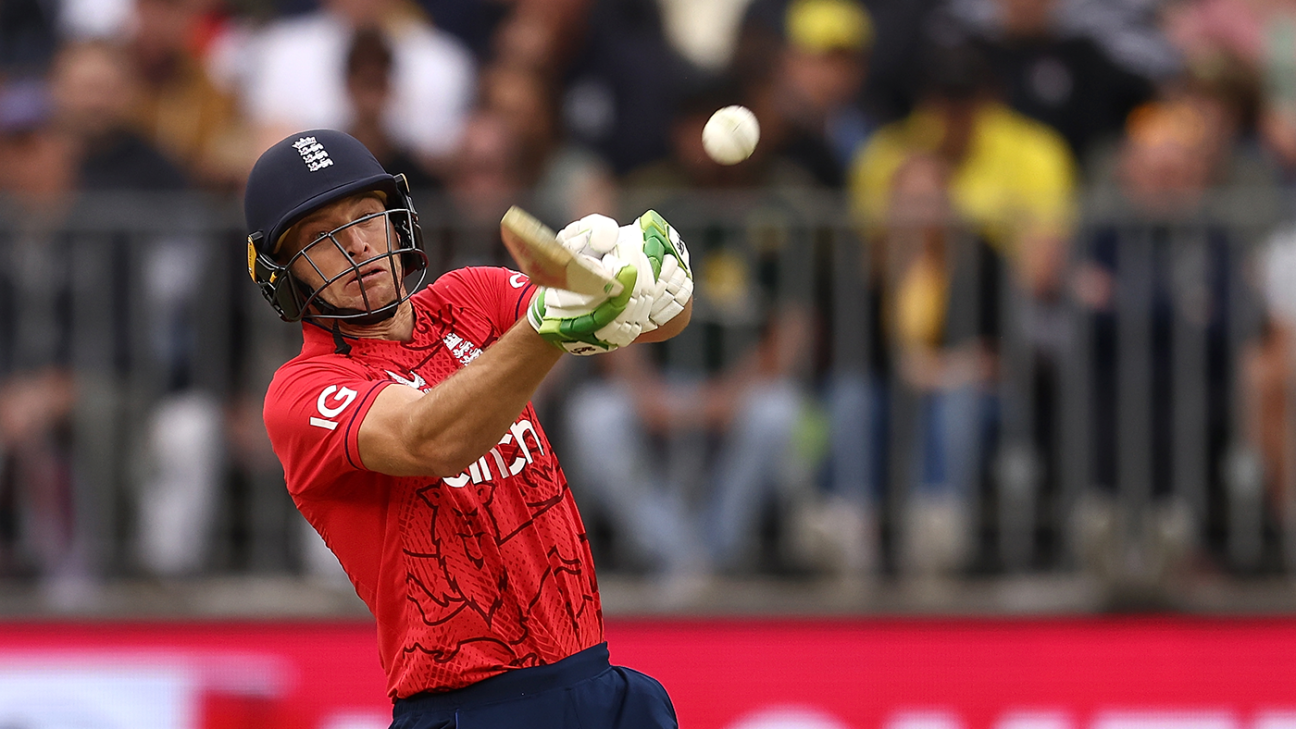 After touching down in Australia for the build-up to their winter’s main event, England duly hit the ground running in a richly entertaining opening T20I in Perth. The narrowness of the eight-run victory perhaps masked the extent of the gains made on a Sunday night that featured a total of 408 runs – the second-highest tally ever recorded in Australia.

Most particularly there was Jos Buttler’s instant return to form after his lengthy injury lay-off, and another palpitating display of raw speed from Mark Wood, whose three wickets in ten balls proved the true difference between the teams in an otherwise bat-dominated game.
Factor in Alex Hales’ Player-of-the-Match-winning 84 from 51 balls, and another incisive display of left-arm lankiness from Reece Topley, and there were plenty of reasons to believe in Buttler’s assertion that England will be a “dangerous” opposition in the fast-approaching T20 World Cup.
And yet, the defending champions – as if anyone needs reminding – are not just the hosts of both this series and next week’s tournament, they were also missing a knot of key East Coast-based personnel, all of whom are likely to be welcomed back over the coming two games in Canberra. Besting an attack boasting the big three of Mitchell Starc, Pat Cummins and Josh Hazlewood will be a very different challenge for Buttler’s men, but should they manage to do so, they could yet seek an upgrade from their current dark-horse World Cup status.
Related
Either way, reading too much into this week’s events would be careless, however. England vs Australia is rarely less than full-throttle, but the warm-up nature of this series was perhaps epitomised when Buttler chose to hold his horses at the potential flashpoint of the opening contest – Matthew Wade’s apparent hand-off on Wood as he closed in on a caught-and-bowled opportunity.
There can have been few more textbook examples of “obstructing the field” in international history, but Buttler – all too well acquainted with the media frenzy that can follow atypical dismissals – seemed to reason that the potential for uproar was just too distracting to countenance. The fact that Wade was unable to extend his recent proud record of closing out run-chases seemed vindication enough for now. Let’s see what happens in the cut and thrust of knock-out cricket.
Wood, however, is unlikely to be a factor again on Wednesday. England’s cautious handling of their prize asset meant he was limited to two (singularly explosive) outings on their recent seven-match tour of Pakistan, and he is sure to be held back once again to ensure he’s in prime form when they return to Perth on October 22 for their campaign opener against Afghanistan. Chris Jordan is primed for his first outing since August, after injuring his finger during the Hundred.

Australia’s frontline attack will be back in Canberra•Getty Images

Tim David has surely done enough to earn a starting place in the World Cup, but just when it seemed he was making an unanswerable case he had his credentials frazzled a touch at Perth Stadium in another snortingly quick display from Wood – his spliced pull resulted in a third-ball duck and a fatal derailing of Australia’s previously serene run-chase. Nevertheless, David still has credit aplenty, not least after a ballistic 42 from 20 balls against West Indies last week, and particularly in light of Steven Smith’s own struggles to impart any power into his faltering short-form game.
One uninspiring outing later, and the narrative hasn’t yet shifted for the recalled Ben Stokes. His star quality can never be doubted, and when it comes to the crunch of a World Cup, who would dare bet against his force of personality having a decisive say? But in the meantime, his quest for form in an extremely condensed build-up remains the hottest topic in England’s ranks. To some extent, the continued absence of Liam Livingstone gives England and Stokes licence to keep pushing for that break-out display. But, in a situation that rather mirrors the Smith dilemma in Australia’s ranks, these are not like-for-like options. The peak performance of Test greats such as Smith and Stokes may be beyond the scope of their contemporaries, but in the sprint of a T20 innings, is there enough road for either man to reach top speed? It’s a question that may yet determine both team’s campaigns.

The return of the big guns beckons in Canberra, where Starc, Cummins, Hazlewood, Adam Zampa and Glenn Maxwell will all be available for selection after sitting out of the series opener in Perth, means Nathan Ellis will be unlucky again – he hasn’t even travelled with the squad – after taking a brilliant 3 for 20 on a night when Australia’s other 16 overs yielded 188 for 3. At the top of the order, Aaron Finch has confirmed he will resume his partnership with David Warner, after making way for Cameron Green in Australia’s last three outings. One question is whether they want to get another innings into Smith or give Josh Inglis a pre-World Cup hit.

Australia (probable) 1 David Warner, 2 Aaron Finch (capt), 3 Mitchell Marsh, 4 Glenn Maxwell, 5 Marcus Stoinis, 6 Tim David, 7 Matthew Wade (wk), 8 Pat Cummins, 9 Mitchell Starc, 10 Adam Zampa, 11 Josh Hazlewood
Hales has reaffirmed his credentials at the top of the order, and will surely now be Buttler’s first-choice partner for the World Cup. The rest of England’s dominoes will fall into place from there. Livingstone has indicated that he is targeting the final warm-up against Pakistan for his comeback from an ankle injury, so the two Canberra matches will be further opportunities for the remainder of England’s middle-order to jostle for their roles. Dawid Malan was shunted out of his No. 3 berth to give Stokes extra game-time in Perth – to no great avail as it turned out – but will be eager to reacquaint himself with Australia’s high-kicking pitches, which ought to suit his style. On the bowling front, Chris Jordan could be set for his first outing of the winter after a finger injury, while David Willey is also waiting in the wings. Mark Wood and Reece Topley are the likeliest candidates for a rest.
England (probable) 1 Jos Buttler (capt & wk), 2 Alex Hales, 3 Dawid Malan, 4 Ben Stokes, 5 Harry Brook, 6 Moeen Ali, 7 Sam Curran, 8 Chris Woakes, 9 Chris Jordan, 10 David Willey, 11 Adil Rashid.

Bowlers have performed reasonably well in the three men’s T20Is at this ground with an overall economy rate of 7.30 – the third lowest of all venues in Australia. The forecast is for a dry day on Wednesday, less so for Friday’s second game.

“The best T20 teams in the world over the last five, six years, have that flexibility… we’re almost a team within a team.”

Mitchell Marsh on the role of Australia’s allrounders.
“I think that’s the most important thing. We’ve had a really good chat and things have been fine. There’s been no air-clearing at all, we just sat down with Jos [Buttler] and said our goal is to win the World Cup. It’s been really good, really smooth.”
Alex Hales insists his relationship with Ben Stokes is healthy.
Tags: Australia, Australia vs England, Ben Stokes, England, England in Australia, Jos Buttler, Mark Wood, Tim David