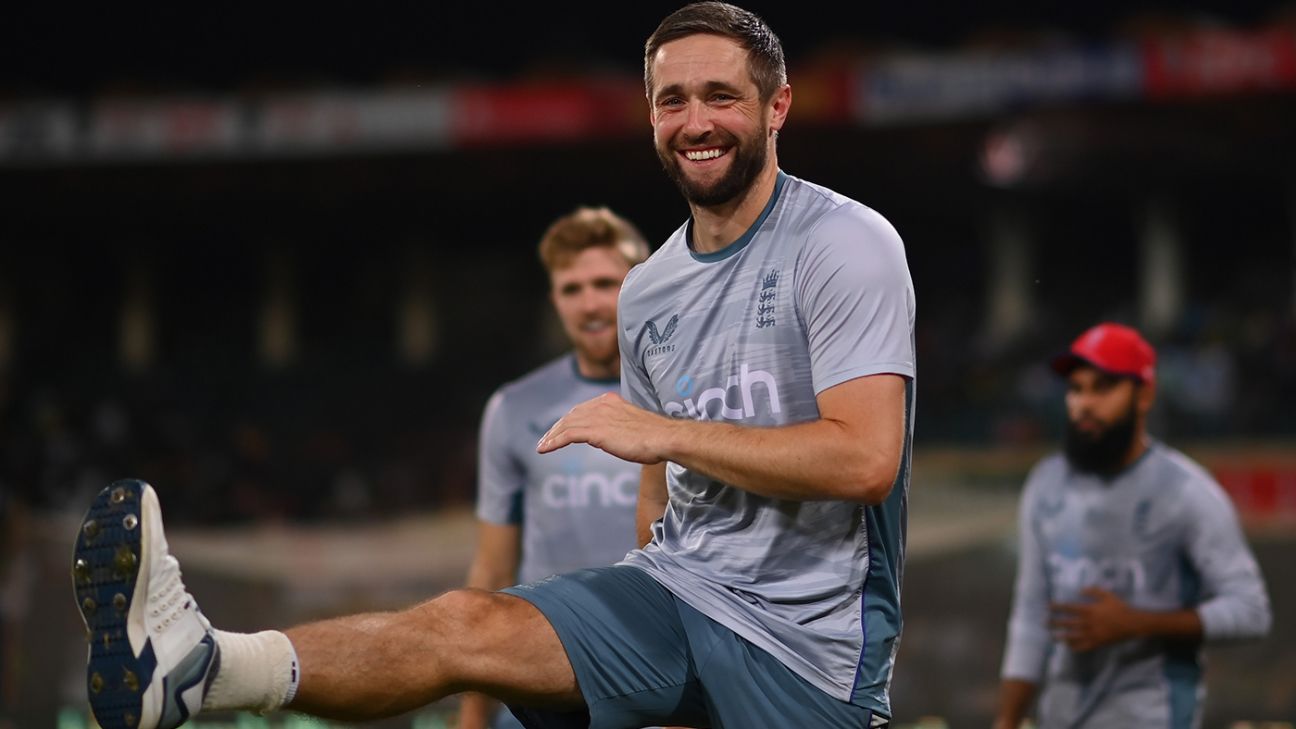 England seamer Chris Woakes is in doubt for the side’s T20 World Cup opener against Afghanistan as he battles quad stiffness. His injury might further stretch England’s options in the powerplay and the death.
After England were rocked this week by the loss of in-form seamer Reece Topley for the entire tournament, Woakes was tipped to be a starter for the clash on Saturday at Perth’s pace-friendly Optus Stadium.
But he faces a race against time to be fit and went through what appeared to be a fitness test on the ground on Friday afternoon. Under the watchful eyes of England’s medicos, Woakes had an intense workout, including several sharp sprints, while just metres away left-armer Tymal Mills – who replaced Topley in the squad having recovered from a toe injury that had sidelined him in recent months – marked his run-up, adding to the intrigue.
“He [Woakes] is not someone you’d want to take a risk on. But I think he’s feeling good,” England captain Jos Buttler said. “He’ll take full part in training today and hopefully pulls up well.
“He’s obviously a key player for us.”
Related
Woakes looms as an especially important cog of the attack during the powerplay. He issued a reminder during the third T20I against Australia in Canberra that he might be England’s best new-ball bowler with three wickets, including Aaron Finch and Mitchell Marsh with the first two deliveries of the innings.
Woakes has endured an injury-riddled year, including surgery on his left knee, before returning in style recently in Pakistan. In the seventh T20I, he claimed 3 for 26, including Babar Azam in the first over, helping England to a big victory.
In that match he also claimed Shan Masood in the penultimate over to further showcase his versatility at the death. He won’t be easy to replace if ruled out with Mills, David Willey and Chris Jordan fighting for a berth alongside speedster Mark Wood and Sam Curran, who starred against Australia with clutch death bowling marked by canny slower deliveries.
While Woakes and Topley were originally earmarked to be England’s new-ball bowlers, Willey could now be a powerplay option along with Ben Stokes, who recently returned to T20Is after an 18-month absence.
England have already been dealing with the headache of losing Topley on tournament eve, in what is a significant blow, given his flexibility and versatility to bowl at every phase.
“We’re all so bitterly disappointed for him,” Buttler said of Topley, whose 17 T20I wickets is the most by an England bowler this year.
“The amount of setbacks he has had already in his career…to come back and be in the position he’s in on the eve of a tournament, being in such great form, and to have that cruelly taken away from him is really tough.”
Even though England have entered the tournament with bad injury luck, much like 12 months ago, there is an air of confidence in their camp that has been evident since they initially arrived in Perth earlier in the month.
It manifested in an impressive series victory over Australia, which probably would have been a clean sweep if not for a washout in Canberra, but Buttler has managed expectations in his first major tournament in charge.
“Far from it,” Buttler said when asked if he believed England were favourites, preferring to give the tag to Australia. “I think we’re a dangerous team who have players who can win games on their own and that’s a huge thing in T20 cricket.
“We have plenty of options as to whichever way we want to go. I’m very confident in the team.”
Tags: Afghanistan vs England, Chris Woakes, England, Jos Buttler, Reece Topley, Tymal Mills