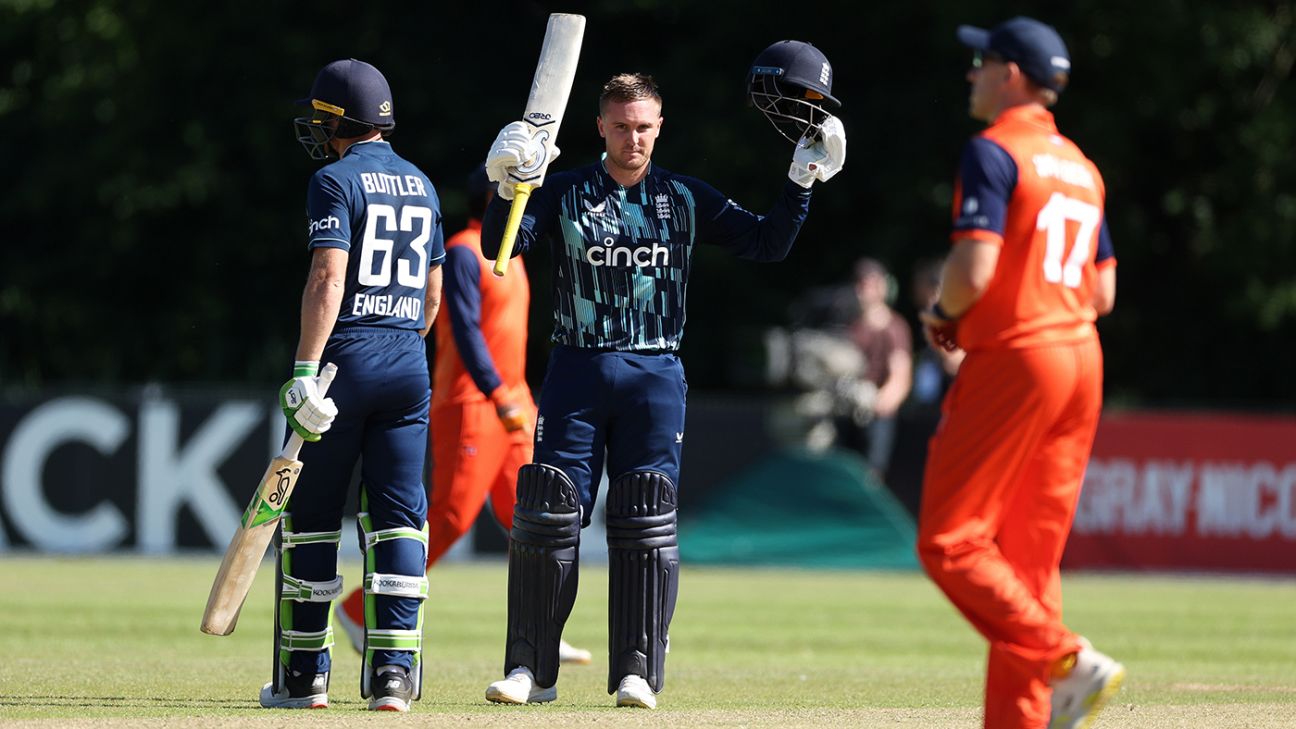 Jason Roy is set to return to England’s limited-overs set-up during their three-match ODI series against Australia in November.
Roy, 32, was left out of England’s squad for the T20 World Cup after a horror run of form during the home summer, averaging 12.66 across England’s T20Is against India and South Africa and managing 51 runs in six innings for Oval Invincibles in the Hundred. He recently lost his ECB central contract, though has retained an incremental deal.
But he is set to maintain his place in the 50-over set-up and is expected to be named in England’s ODI squad next week for the series against Australia, which takes place immediately after the World Cup with fixtures on November 17, 19 and 22.
Roy was also short of runs in England’s home ODIs this summer, making 121 runs at an average of 24.20 across five innings, but his struggles were tempered by the fact that conditions were as tough for batting as they have been in recent memory. He also made an unbeaten 101 against the Netherlands as recently as June.
Jos Buttler, England’s white-ball captain, described Roy as “my first choice as 50-over opener” during the tour to Pakistan last month. “We know what a brilliant player he is when he’s on song,” Buttler said. “He will be a vital player for England moving forward. His talent is never going to be in question.”
Alex Hales, who will open the batting for England in the World Cup, is not expected to be involved in the ODI squad despite his reintegration into the international set-up. Earlier this week he recommitted to a contract with Team Abu Dhabi in the Abu Dhabi T10, which starts the day after the third Australia ODI, and the franchise’s management expect him to be available throughout.
Related
Hales suggested in Pakistan that he did not expect to be involved in the 50-over set-up, having not played a List A game since May 2019. “I love T20 cricket,” he said. “It’s always been my passion. I’m 33 now and I want to give all my energy and attention to being as good as I can in that format.”
Roy said in an Instagram post this week that he was “motivated to say the least” after missing the cut for the T20 World Cup. “Obviously gutted and have a range of emotions after not making the World Cup squad,” he wrote.
“However backing the boys to lift the trophy! Going to be an awesome tournament. Getting the work in and pushing hard to be back where I want to be. Motivated to say the least. Plenty opportunities coming up and excited for what’s ahead.”
England are expected to make several changes to their T20 World Cup squad for the ODI series. Four members of the World Cup squad (Ben Stokes, Liam Livingstone, Harry Brook and Mark Wood) are due to arrive in Abu Dhabi on November 18 – the day after the first ODI – for a training camp before the Test tour to Pakistan.
As a result, they will need to add middle-order batters to the squad, with James Vince and Sam Billings both in contention to return to the ODI set-up, while Olly Stone and Tom Helm could be considered as fast-bowling cover.
The three-match ODI series is not part of the World Cup Super League and will feature fixtures at Adelaide Oval, the SCG and the MCG.
Tags: England, England in Australia, Jason Roy