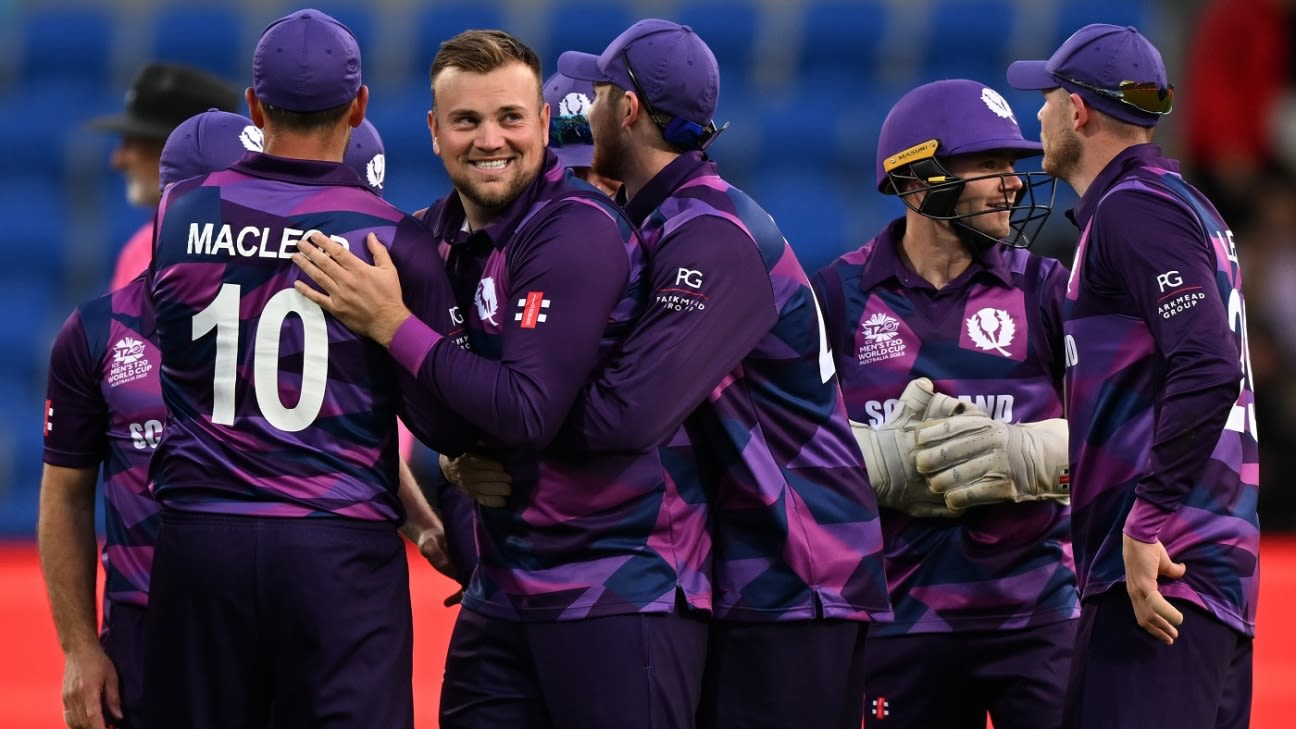 Playing the evening game on Friday, both Scotland and Zimbabwe will know exactly what they have to do to get through to the Super 12s. But the equations won’t be available until after the Ireland-West Indies game, and the weather might have a say. For now, though, the two sets of players are mentally preparing for the big day.
“I think we have to get the job done,” Zimbabwe allrounder Ryan Burl said on match eve. “It is must-win games for all four teams in the group. We have to put our best foot forward tomorrow. I think it goes without saying, it would be a massive achievement for any team in the group [to progress to the Super 12s]. It is obviously our goal coming into this stage. Do whatever you can to ensure you are among the top two.
Related
“The mood is good in the camp. I think there’s obviously a little bit of nerves around the group now, knowing that we have to win the next game. But the morale is good. The guys are very upbeat. We want to make sure we are in the next stage.”
Scotland coach Shane Burger had a similar viewpoint, still buoyed by his team’s big win over West Indies earlier in the week.
“We know that without focusing too much on the opposition, if we go out and play our way, we know we can beat any team,” Burger said. “We did so not very long ago against the two-time world champions. So if we execute the way we know, hopefully it will send ripples through that Zimbabwe team. We can put a bit more pressure on them.”
Scotland will need to draw on the good vibes they got from beating West Indies, and put the Ireland fightback behind them•ICC via Getty Images
Scotland were downed by a late Irish resurgence in their last match, with Curtis Campher and George Dockrell putting together a match-winning stand when all seemed lost for Ireland. Burger said that Scotland have to learn from that and pick themselves up quickly.
“There was obvious disappointment after the game. It wasn’t just one moment but many moments. Hindsight is a great thing. As a Scottish team, we are not used to be in those situations on a daily basis. I am incredibly proud of how the boys have managed themselves on and off the field. We will learn a lot from what happened yesterday.”
Burger was particularly impressed with Michael Jones, who made 86 against Ireland; he believes this it is only the start for the young opener. “Michael has fit into the unit very well. He has been part of the unit for a long time, even though many might not recognise the name. He didn’t play a lot of games for Scotland [till now]. We always knew he was going to break through at some point, we always knew his quality.
“We certainly saw glimpses of that yesterday. We know that he wants to keep getting better. He is a wonderful cricketer, with superb skills. He had a fantastic game yesterday, but just a shame we couldn’t get over the line and get that victory.”
Zimbabwe, meanwhile, will be hoping for one of their several allrounders to come good on Friday. Burl, who has form on his side with a recent ODI five-for against Australia, is itching to be their man.
“Playing that role of an allrounder, you try to come to the party in at least one aspect of the game. I haven’t really made an impact yet but a good performance is just around the corner,” Burl said. “Hopefully it is a match-winning one. I think I am due a bit of runs. It will be nice to put Zimbabwe in a winning position.”
Tags: ICC Men's T20 World Cup, Ryan Burl, Scotland, Scotland vs Zimbabwe, Shane Burger, Zimbabwe