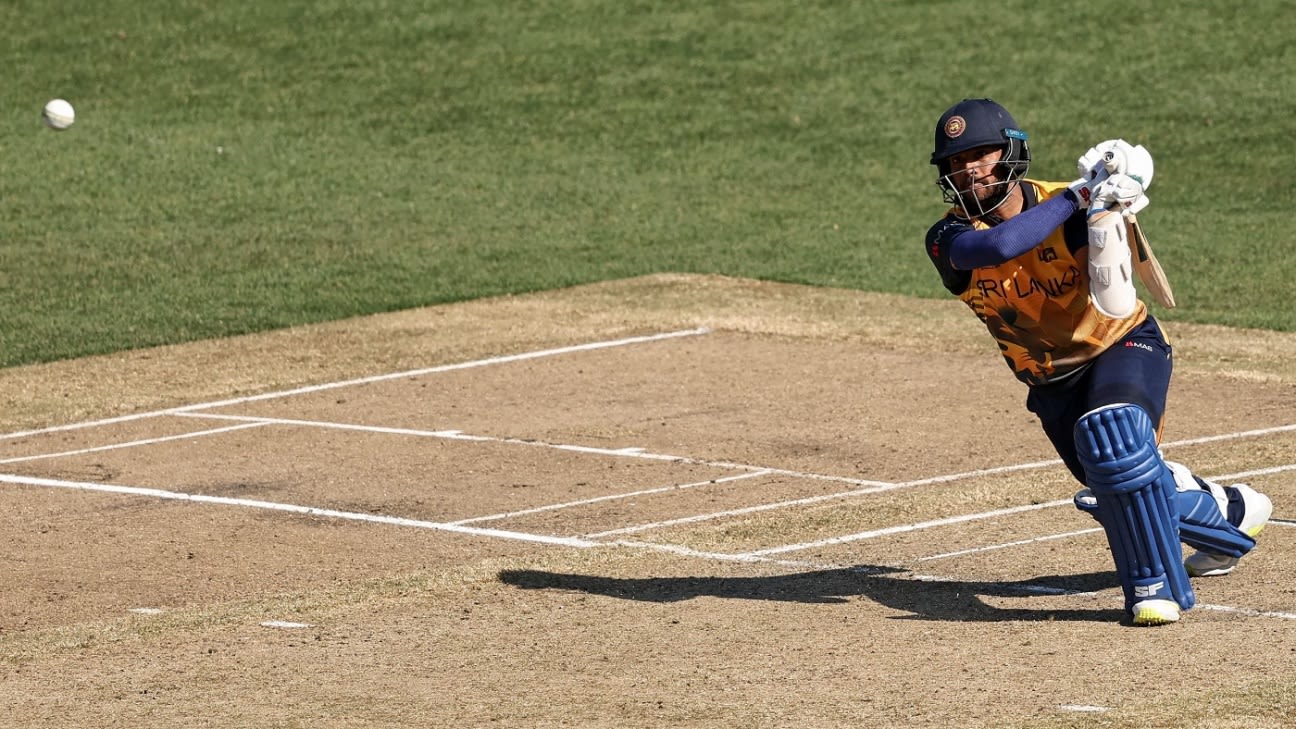 Sri Lanka 162 for 6 (Mendis 79, Asalanka 31, van Meekeren 2-25, de Leede 2-31) beat Netherlands 146 for 9 (O’Dowd 71*, Edwards 21, Hasaranga 3-28, Theekshana 2-32) by 16 runs
Sri Lanka rode on Kusal Mendis’ outstanding 79 off 44 to reach 162 for 6 on a sluggish surface, before their spinners cut Netherlands down – Wanindu Hasaranga getting into fine wicket-taking form ahead of the main draw of the tournament.
Although Netherlands were never really ahead of the game, opener Max O’Dowd kept them in the hunt for the duration, getting the requirement for the last over down to 23, following Maheesh Theekshana’s wayward 19th, which cost 16 runs.
But seamer Lahiru Kumara held his nerve in the final burst, and Sri Lanka secured a 16-run win, and a place in the next round. Which group they end up in will depend on the results of the evening match between Namibia and UAE.
Netherlands will watch that match with particular interest. They need UAE to beat Namibia to get into the next round. The net run rates do not matter – only the result.
Mendis feasts on Netherlands’ leg-side offerings
On a pitch that did not allow batters to hit cleanly through the line, and on a ground where the square boundaries are significantly shorter than the straight ones, you probably shouldn’t bowl at leg stump. You especially shouldn’t stray down leg if the batter is Kusal Mendis – an excellent hitter to that side.
Mendis got his first boundary via a miscued heave over midwicket in the third over, and he kept finding the ropes in that arc between cow corner and fine leg. He hit each of his five sixes over this region, pulling, slog sweeping, and in the 12th over, wristily flicking Timm van der Gugten into the stands beyond fine leg. He hit five fours too, only two of them on the off side. Sixty-four of his 79 came on the leg side.
Through the course of this knock, which went right into the 20th over, Mendis forged several good partnerships, the most fruitful of which was the 60 off 45 alongside Charith Asalanka, whose contribution was 31 off 30. Mendis’ innings meant Sri Lanka made an above-par score on a difficult track.
Max O’Dowd’s 71* off 53 went in vain•AFP/Getty Images
Hasaranga decks Netherlands’ middle order
Sri Lanka were already in control before Hasaranga came to the bowling crease, having kept Netherlands to 40 for 2 in the powerplay. But although he conceded seven runs off his first two balls, Hasaranga was quickly among the wickets. He had Colin Ackerman caught and bowled off the leading edge third ball, after the batter failed to adequately play Hasaranga’s googly. Van der Gugten and Fred Klaassen were also bowled by the googly, later in the innings, giving Hasaranga 3 for 28 from his four overs.
O’Dowd makes a game of it
With Theekshana also getting wickets, and Sri Lanka fielding well, it did not seem like Netherlands had the measure of their target. O’Dowd did his best to defy the opposition, however, hitting 71 not out off 53 balls.
He wasn’t particularly proactive in the first ten overs, hitting just 23 off 21 with two fours. As wickets fell around him in the middle overs, he remained happy to play a measured innings. In fact, at the end of the 17th over, O’Dowd was still 38 off 35 balls, with only three boundaries to his name. Netherlands needed 54 off 18, and had only two wickets left.
And yet, O’Dowd, with the help of some Sri Lanka indiscipline, made half a game of it. He hit a six and two fours off successive deliveries from Binura Fernando to reap 15 in the 18th over and then bashed Theekshana for two sixes (one off a no-ball) next over to keep victory within their reach. Theekshana helped out by bowling three extras in a row at the start of this over.
But 23 off Kumara, in the company of a hobbling Roelof van der Merwe (who came in at No. 11), proved too much. O’Dowd managed one four over backward point, but only six came off that over.
Tags: ICC Men's T20 World Cup, Netherlands, Sri Lanka, Sri Lanka vs Netherlands