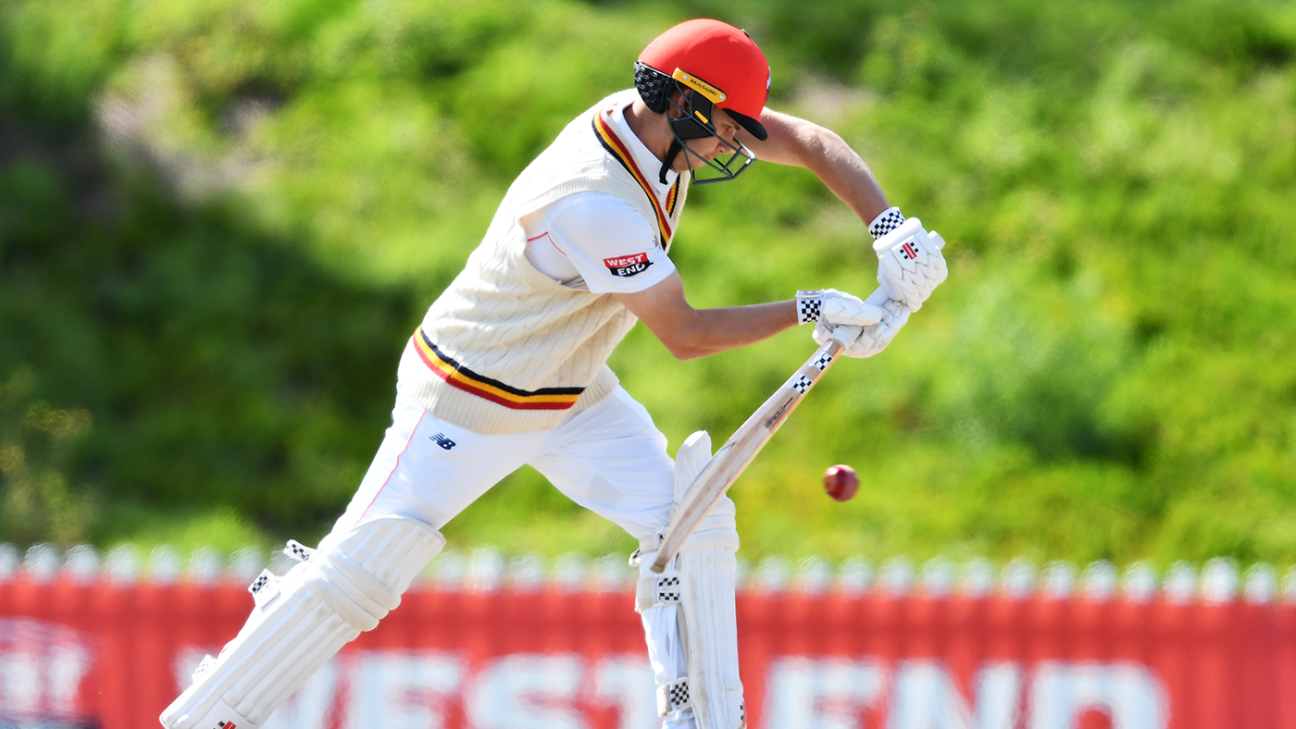 South Australia 230 (Head 76, Carey 70, Sutherland 4-45, Boland 4-60) and 7 for 207 (Hunt 97*) drew with Victoria 310 (Sutherland 100, Harris 85, Grant 4-82) and 7 for 344 dec (Handscomb 132, Buckingham 4-78)
A thirsty Henry Hunt insists there’s no bad blood with Victoria despite stumps being called early with the South Australian opener stranded three short of a stoic Sheffield Shield century.
Hunt (97 off 326 balls) was impenetrable on Sunday, refusing easy singles for the last hour to farm the strike as the Redbacks finished 7 for 207 after 107.4 overs in unlikely pursuit of 425.
After creeping through the 80s at Adelaide’s Karen Rolton Oval, Hunt began the day’s final over on 93 and glanced Will Sutherland’s fourth ball for four. But after denying Victoria victory they denied him a century.
Related
With two balls left and a result out of the equation, players shook hands for a draw to rob Hunt of potentially two swings at an eighth first-class hundred.
“At the end of the day I just wanted to get off the field and have a beer,” a diplomatic Hunt said of the final over being cut short. “It’s nice to have personal success but the end result of the day was to try and get the draw.
“Boxes ticked in that regard; hopefully I can maybe score a little bit quicker in the next game, hit a few more boundaries and it might be on the cards. Backs against the wall given the position we were in early after lunch, it was the best possible result for us.”
Victorian captain Peter Handscomb’s day-three century was followed by a late declaration, with SA surviving 12 overs to resume on Sunday at 0-38 requiring a further 387 runs for an improbable win.
Three wickets in each session extinguished hope of a successful chase, with debutant Fergus O’Neill dismissing Test pair Travis Head and Alex Carey.
Head flayed at a drive but picked out short cover to officially kill-off the chase, while Carey’s grinding innings (2 off 38 balls) was ended when wicketkeeper Sam Harper snaffled an edge while standing up to the stumps.
Allrounder Nathan McSweeney then struck a wide, looping Jon Holland full-toss to a diving Mitchell Perry at backward point to open up the tail.
Victoria engineered another wicket when Nic Maddison’s direct hit from a tight angle found Wes Agar (19 off 56) just short of his ground.
That was the only wicket to fall in the final session though, with No. 9 David Grant digging in for 45 balls without scoring to see it through with Hunt.
There were few other chances, although Hunt survived a tight lbw appeal and almost chopped a ball onto his stumps in consecutive deliveries against spinner Holland.
Sutherland went wicketless in the final innings but had a fine game, his first-innings maiden century followed by a four-wicket haul to give Victoria an 80-run first innings lead.
Tags: Henry Hunt, Sheffield Shield, South Australia, Tasmania, Victoria vs South Aust

Bashar back for Bangladesh