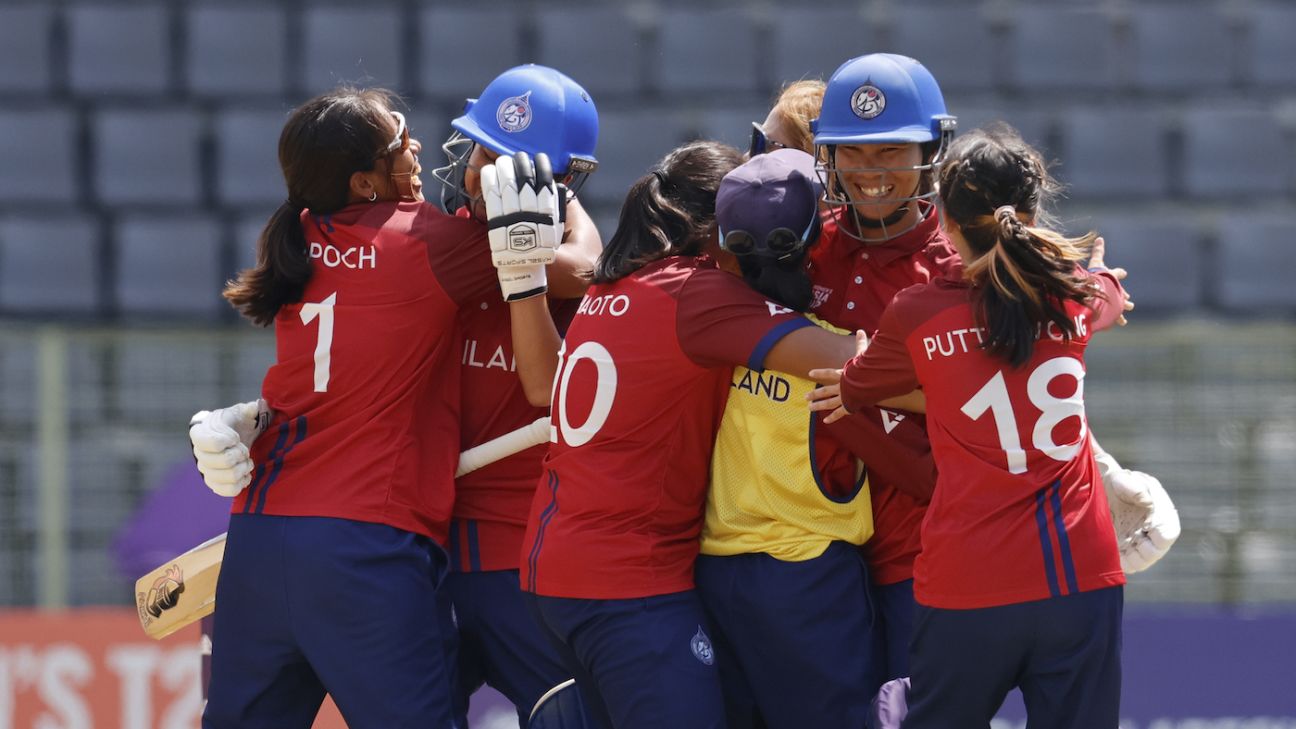 Thailand Women 117 for 6 (Chantham 61, Tuba 2-18, Dar 2-26) beat Pakistan Women 116 for 5 (Ameen 56, Tippoch 2-20) by four wickets
Thailand pulled off one of the biggest wins in their still-young cricket history, beating Pakistan by four wickets in their Women’s Asia Cup match in Sylhet this morning. The stars of the win in a low-scoring game were Natthakan Chantham, who led their chase of 117 with a 51-ball 61, Sornnarin Tippoch, who returned 2 for 20 in a strong Thailand bowling performance, and, right at the close, Rosenan Kanoh, who held her nerve against Diana Baig in a nerve-wracking final over to take them over the line.
Prior to this, Thailand’s biggest win had come in the 2018 T20 Asia Cup, when they beat Sri Lanka by four wickets in Kuala Lumpur. Against Pakistan, they would have fancied their chances after putting up 150 for 3 at a 2020 T20 World Cup match in Sydney, but the chase had been washed out. This time, Chantham ensured the result did go her team’s way, even though she couldn’t hang around to finish the job.
The game appeared even at the midway stage of the Thailand chase. Thailand had lost a couple of early wickets to Tuba Hassan, but had then settled down, though there was no urgency in their run-scoring.
After ten overs, they were 45 for 2, with 72 needed. Naruemol Chaiwai hit Tuba for four in the 13th, and then Chantham lifted Omaima Sohail down the ground for a six in the 14th, and suddenly, the equation was down to 44 from 36, and the momentum had clearly shifted.
There had to be a hiccup, and it came in the form of Chaiwai and Tippoch falling in consecutive overs, to Kainat Imtiaz and Nida Dar respectively, but at the other end, Chantham went down the ground and over the fielder at long-on to get to a 45-ball half-century. It could have ended for her there, but Dar dropped a sitter in the deep off Nashra Sandhu’s bowling to give Chantham the break she needed.
The Thailand players celebrate after pulling off the win over Pakistan•ACC
It became a bit of a scrap after that. Sandhu got rid of Phannita Maya, there was a lot of frenetic running, peppered by the occasional attempted big hit that didn’t go anywhere, and Chantham was lucky to avoid being run-out when Dar fumbled with the throw from the deep at the bowler’s end. Dar got her own back not long after, though, getting Chantham caught at deep midwicket, leaving Thailand with 11 to get from eight balls.
That became ten from the last over, bowled by Baig. Wide. Single. And then the game-changer: a slog straight down the ground for four by Kanoh off a juicy full-toss. An inside edge to fine leg for two came next, then a scrambled single, and then the winning hit, a slog from Nattaya Boochatham over midwicket for a single.
Earlier, after Pakistan chose to bat, they were kept in check by a disciplined Thailand bowling show.
As such, with Sidra Ameen holding the innings together from the top with a 64-ball 56, Pakistan did put runs on the board, but the going was slow all along. Tippoch picked up the big wickets of Dar and Ayesha Naseem at a crucial juncture in the last quarter of the innings, while all the bowlers on view conceded runs at 6.50 or under.
Despite the loss, Pakistan are placed second, behind India, with Thailand fifth in the seven-team table after registering their first win.
Tags: Natthakan Chantham, PAK Women vs Thai Women, Pakistan, Pakistan Women, Sornnarin Tippoch, Thailand, Thailand Women, Women's Asia Cup

Moores to stay with Notts as consultant