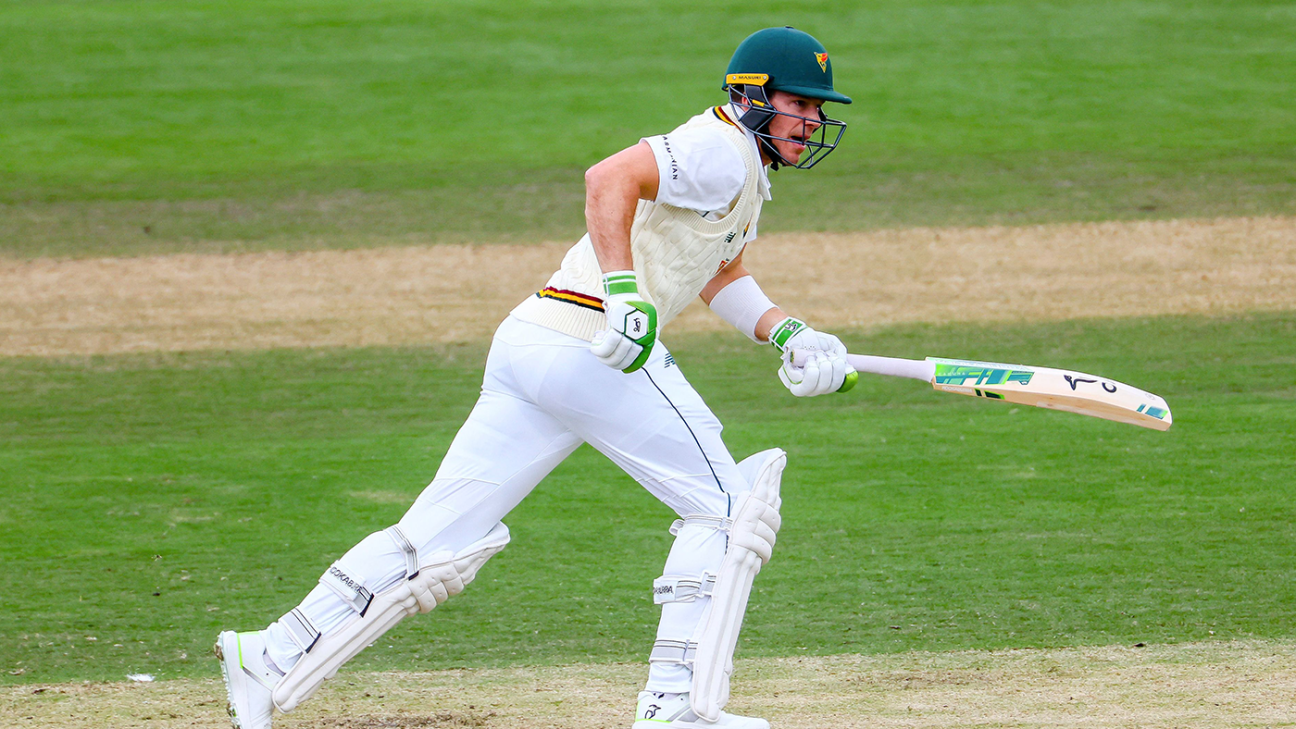 Queensland 1 for 70 trail Tasmania 147 (Steketee 4-43) by 77 runs
Tim Paine made 6 and pouched a sharp catch in his cricket return as Queensland owned day one of their Sheffield Shield clash against Tasmania in Brisbane.
Sent in by Queensland captain Usman Khawaja in gloomy conditions, Tasmania limped to 5 for 59 to bring the former Test skipper to the crease shortly after lunch on day one.
Paine got off the mark with a crisp straight drive for three, but was caught by Matthew Renshaw after edging a cut shot off former team-mate Gurinder Sandhu in a 19-ball stay.
Related
Tasmania fell to 8 for 93 but scraped to 147 thanks to offspinner Jarrod Freeman’s 44 off 65 balls at the redeveloped Allan Border Field.
A modest crowd watched as Michael Neser struck with the third ball of the innings, Caleb Jewell’s attempted cover drive finding Matt Renshaw at first slip. Mark Steketee had Tim Ward and Ben McDermott edging behind the wicket on his way to a four-wicket haul.
Joe Burns (35) then showed his class to pilot Queensland’s reply, the former Test opener driving and pulling with authority as the hosts finished the day 1 for 70. Marnus Labuschagne was also solid, unbeaten on 26 when bad light stopped play about 10 minutes before stumps was scheduled.
Paine looked sharp behind the stumps, diving low to his left for a catch to dismiss Renshaw. He had not played at the top level since April last year following revelations of a 2017 text-message controversy.
Mark Steketee claimed four wickets•Getty Images
He took a summer-long break from the sport but has been training with the Tasmania squad and made a successful return in Hobart grade action last Sunday.
Paine, who shared a laugh with Labuschagne as they left the field, had earlier received a warm welcome by the hosts when embraced by Queensland assistant and former Test quick Andy Bichel before play.
The 22-year-old Freeman was just five when Paine first played for Tasmania in 2005.
“It’s pretty surreal, pretty special,” he said of sharing the field with Paine and fellow Test veterans Peter Siddle and Jackson Bird. “With Painey behind the stumps it boosts you 10, 20 per cent and they know what they’re talking about.
“He’s one of the best keepers in the world still, would silly not to have him in the side in that aspect. He’s bounced back and showed he’s not done yet, he’s got something to give.”
Speaking to media nearby as part of Australia’s T20 squad, fellow former captain Steven Smith said Paine would “absolutely” be welcomed back by players into the national fold.
“I’m sure he’s excited,” Smith said. “It’s great to see him back doing what he loves; he’s just down the road so I wish him all the best in this game. Phone’s always on so if he’s around [to catch up], yeah no reason why not.”
Spinner Mitchell Swepson wasn’t named to play for Queensland after being called into Australia’s T20 squad to face England on Sunday in Perth.
Tags: Joe Burns, Mark Steketee, Queensland, Sheffield Shield, Tasmania, Tasmania vs Queensland, Tim Paine