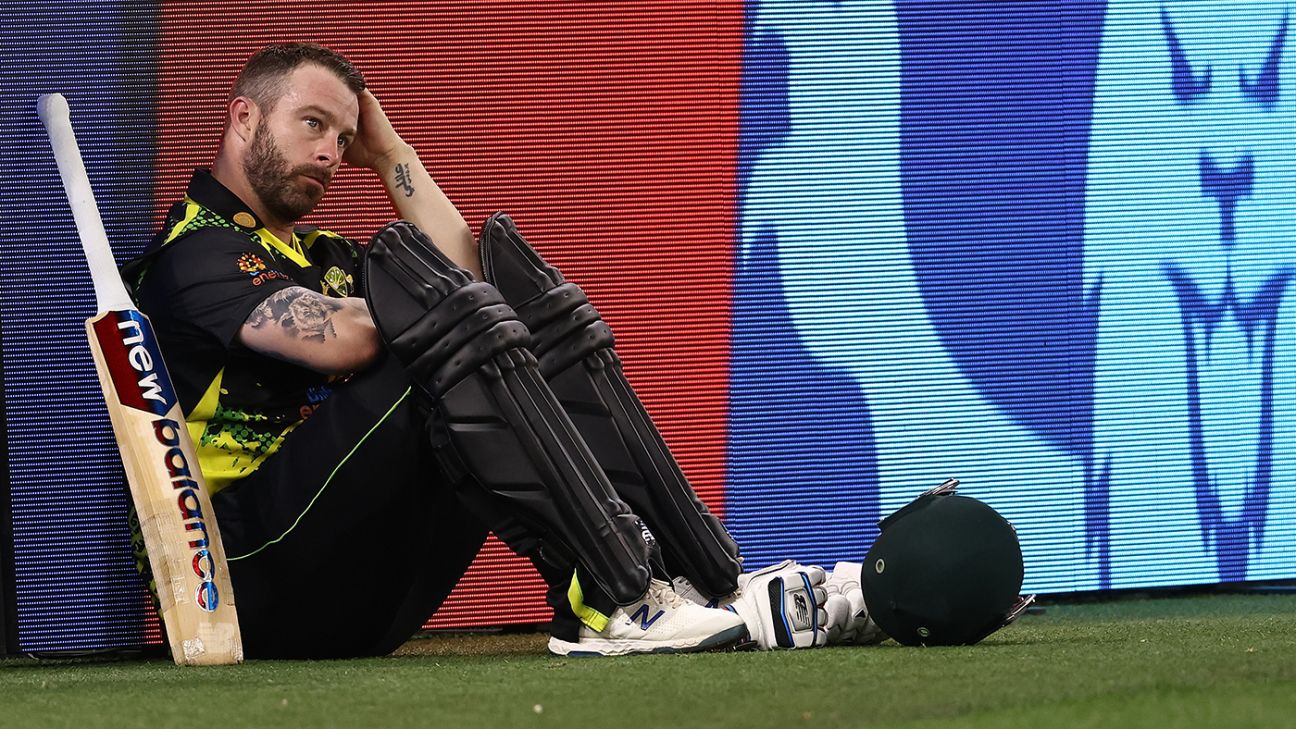 England captain Jos Buttler said he might have considered appealing against Matthew Wade obstructing the field in a higher-stakes contest in the aftermath of his side’s thrilling eight-run victory over Australia in Perth.
The series opener, in what is effectively a warm-up ahead of the T20 World Cup, was delicately poised with Australia at 170 for 5 and needing 39 off 23 balls when Wade top-edged a fierce short delivery from speedster Mark Wood into his helmet that then ballooned into the air.
Wood ran towards the batter’s end in a desperate effort to take the return catch but was blocked by a seemingly shaken Wade, who then impeded the quick by sticking his arm out as he tried to get back into his ground.
Related
Buttler was asked by the on-field umpires whether he wanted to appeal, but declined as Wade survived and needed his helmet replaced. There was widespread confusion for players and the 25,000 Optus Stadium crowd, but the incident was somewhat dampened by Buttler’s non-appeal in England’s first hit out on Australian soil as the T20 World Cup looms.
“Maybe,” said Buttler in his post match press conference when asked if he would have appealed for obstructing the field if it was a T20 World Cup match. “They asked if I wanted to appeal and I said ‘no’. I’ve only just got to Australia so I thought just carry on with the game.”
Buttler said he “didn’t really see what happened” because he was watching the ball closely.
“It was hard because I didn’t know what I was appealing for,” he said. “I could have asked some of the other boys to see if they had a better view but thought I would get on with the game.
“Maybe I should have asked a few of the lads.”
Wade, last year’s T20 World Cup hero for his ability at finishing an innings, threatened to get Australia over the line after surviving the incident but holed out in the final over as the home side fell short in the first men’s international match in Perth in almost three years. It was Wade’s first dismissal in a chase since August 2021 – also the last time Australia lost when batting second in T20Is.
“When you’ve been hit in the head and you’re running around and don’t know where the ball is… it’s chaos,” Australia allrounder Marcus Stoinis told reporters.
Buttler paid tribute to Wood, who claimed the key wicket of David Warner for 73 just three balls after the Wade controversy and finished with 3 for 34. “To come back, take those wickets, bowl fast and intimidate the guys which he can do with that pace… he’s got great character too,” Buttler said.
Tags: Australia, Australia vs England, England, England in Australia, Jos Buttler, Mark Wood, Matthew Wade