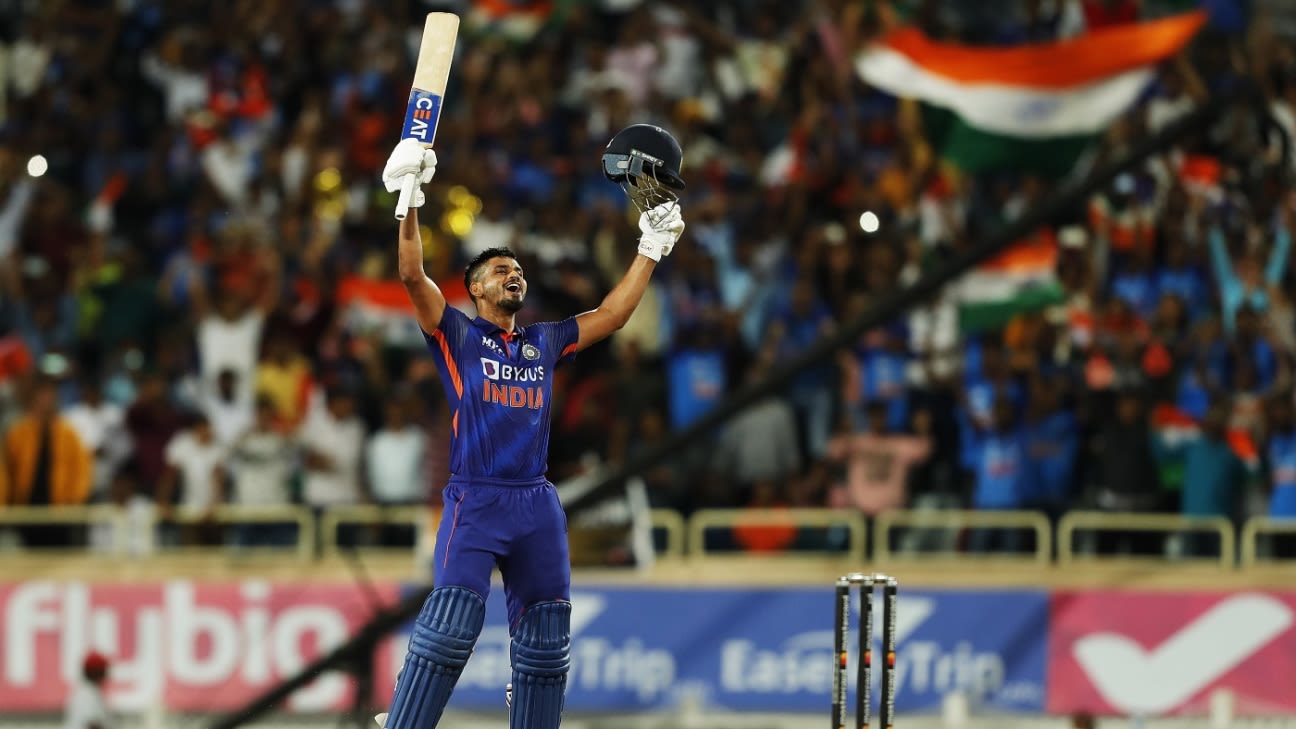 Shreyas Iyer is enjoying a purple patch, with four half-centuries and a hundred in his last six ODI innings. That’s some unreal form in different conditions: from the bounce of the red-soil surface in Ahmedabad, to the sluggish pitches in the Caribbean, and biscuit-brown Ranchi.
His latest innings in Ranchi on Sunday was only his second century in ODIs, and a special one because it helped India draw level in the series against South Africa.
Related
Iyer is just 32-ODIs old but he already has an impressive body of work. He averages 47.07 in 28 innings, striking at 98.07 – numbers that would merit selection even in a full-strength Indian XI. It’s the kind of consistency India have yearned for from someone who can bat at No. 4 in ODIs, especially since the 2019 World Cup where the absence of a strong batter in that position came under intense scrutiny after their exit in the semi-final.
Iyer’s success augurs well for India because the next 50-over World Cup is just 12 months away. One of the reasons for his success in this format is his strong game against spin; he strikes at over a 100 against the spinners.
Iyer is strong square of the wicket and can use his feet well, like he has done against South Africa’s left-arm spinner Keshav Maharaj during the ODI series. On Sunday, he started slowly and played the role of an accumulator after Ishan Kishan flicked on his “beast mode” during the course of their 161-run stand for the third wicket.
“[About my] preparation, I just came and took some knocking yesterday [Saturday], but I was disappointed when you missed out on your hundred,” Iyer told Kishan, who was dismissed for 93, in a chat on the BCCI’s website. “I just wanted to talk to you and communicate pretty well, but since you were in beast mode, and in your zone, I didn’t want to intrude on your privacy. Nonetheless, we won the match, and it takes two to tango. I’m really happy that we finished on a good note and probably in the next game, you might get a century.”
Shreyas Iyer and Ishan Kishan added 161 runs for the third wicket•Getty Images
After Kishan was dismissed, Iyer cut loose, playing the shots he had held back for a better part of the knock. The pace of Kagiso Rabada was a tough challenge but the shot he brought out to raise his century was typical Iyer – shuffling across initially and then backing away to use the width and flay the fast bowler over extra cover.
As the ball crossed the ropes, Iyer let out his pent-up emotions, looked up at the skies and roared, before acknowledging the cheers of his team-mates and the crowd. “The celebration was nothing much, it just came instinctively,” Iyer told Kishan. “I didn’t decide that I’d be celebrating in a certain way, but I want to appreciate the crowd. They came out in numbers and the atmosphere was electrifying. I was excited about the contest, as you mentioned, about the wicket, how it’s going to play, I just applied in my mind in a similar fashion and things turned out pretty well for me.”
It is turning out pretty well for Shreyas Iyer. As well as it can, especially after missing out on selection for the T20 World Cup. He will be part of the reserves in Australia, but through his recent performances, Iyer has shown he is match-ready should he be summoned at short notice.
Tags: India, India vs South Africa, Shreyas Iyer, South Africa in India, World Cup Super League