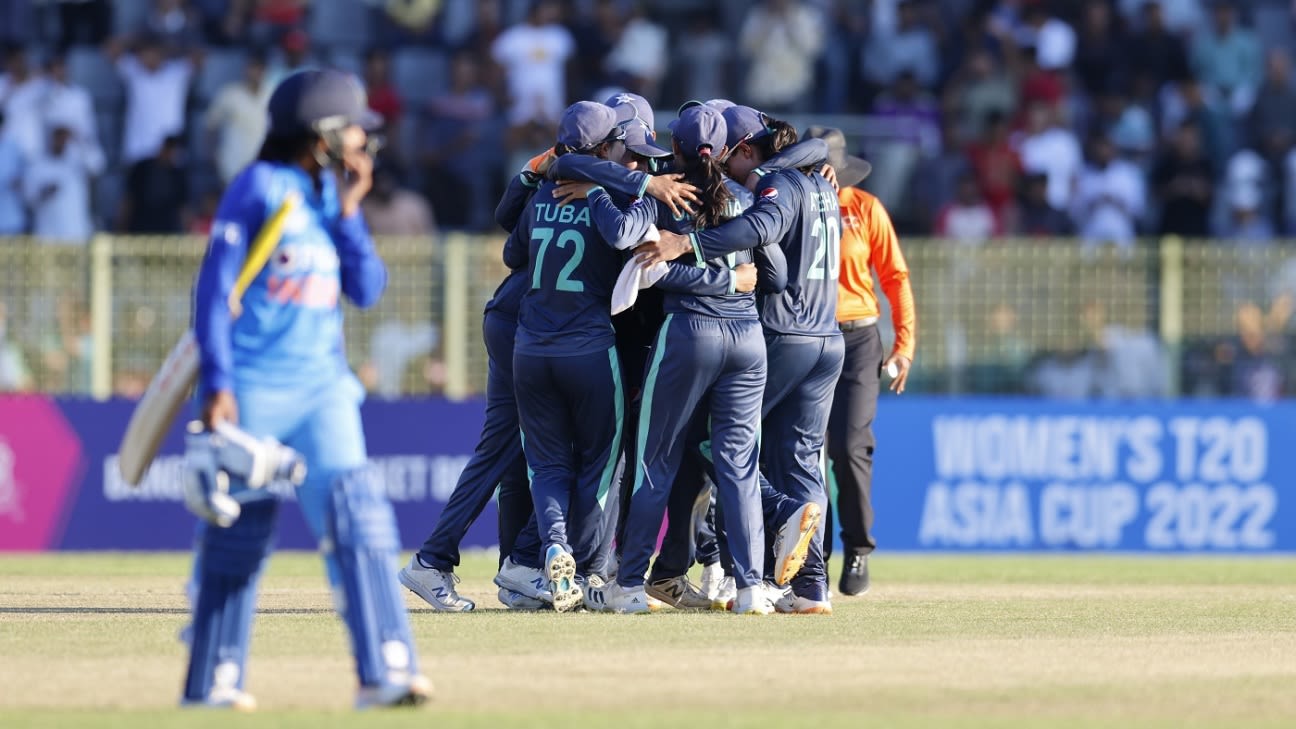 Why did Harmanpreet Kaur go in to bat as low as No. 7? Why was Pooja Vastrakar, a finisher, sent up the order, in the tenth over, ahead of Richa Ghosh? Are India overdependent on Smriti Mandhana?
Cricketing logic would suggest that these questions are perfectly legitimate, especially after losing to a team whose win-loss ratio since the start of 2021 was the joint-lowest of the top 12 teams. When that team happens to be Pakistan, and you are India, every tactical move that doesn’t come off has the potential to be scrutinised even more. But there is more at play here.
Coming into the match, India’s team management took a unanimous decision to “try out combinations”; to put “younger players under pressure” and see how they respond. Also, this loss in itself may not affect their chances of qualifying for the Asia Cup final – India are still No. 1 on the points table and can consolidate their position when they face Bangladesh on Saturday afternoon.
“We didn’t want our regular chasers to come in but try out someone younger who can take that role up,” head coach Ramesh Powar said at the post-match press conference. “This was our fourth game [of the tournament] and we wanted to expose Pooja Vastrakar, Richa Ghosh and [Dayalan] Hemalatha, see how they go through these pressure situations.
“Harmanpreet [Kaur], Jemi [Jemimah Rodrigues] and Smriti [Mandhana] have been doing it for a long time. The purpose was to send the others up so that they can feel that pressure, because we want to see how they react to such situations, especially when they may face it in a World Cup game. So we wanted to take a chance and address the issue.”

“Most players have played enough to understand the importance of an India-Pakistan game. They also understand where we stand in the league table and why we did it”

Powar was then asked if there ever a consideration that this could backfire, to which he said, India being on top of the table – they had three wins in three coming into this match – afforded them the luxury of a… reshuffle (He didn’t want it to be called “experimentation.”)
“Six league games allow us to do that,” Powar reasoned. “If this was a format with two groups and four teams in each, maybe we wouldn’t have tried it. We want to build our team for all conditions and all kinds of pressure situations. Obviously we want to win, but when we face issues that need to be addressed, we should address it.”
Was there any apprehension at all of trying this in a “big game”? “Not really,” Powar said. “Otherwise, we wouldn’t have tried different things. Most players have played enough to understand the importance of an India-Pakistan game. They also understand where we stand in the league table and why we did it.
“This isn’t something only the team management is thinking. We came together as a group, and thought we needed to get through tough situations under pressure with different set of match winners, not just Jemi, Smriti or Harman. We have confidence [in the younger players], that is why we tried it.”
Nida Dar was off the blocks quickly and took the attack to India•Asian Cricket Council
Reiterating that this was “not a setback”, Powar went on to give credit where due. He was particularly effusive in his praise for Nida Dar and the manner in which she took India’s bowlers apart to make an unbeaten 56 off just 37 balls.
“Have to congratulate Pakistan, the way they batted,” he said. “That was some innings from their half-centurion. They played a good brand of cricket, had the upper hand at most stages in the game. They dropped a few catches but took some good ones too.”
India will be back on the field in less than 24 hours to take on defending champions Bangladesh in their fifth game. This can be demanding, especially given the oppressive heat in Sylhet. On Friday, Ghosh walked off the field with cramps and Shafali Verma had to keep wicket in her place. Given all that, Powar confirmed India will revert to their usual plans.
“They’re a good side, champions from last time around, and we look at them as a compact unit,” he said. “But we’ve also come from a good season, carrying the confidence from Sri Lanka, CWG [where India were silver medalists] and a 3-0 sweep [ODI series] in England. We make sure we’re grounded and focused on all departments. We aren’t thinking of who we play, we do our planning against specific type of batters or bowlers. We will come back to our routine in the next game.”
Tags: India, India Women, PAK Women vs IND Women, Ramesh Powar, Women's Asia Cup