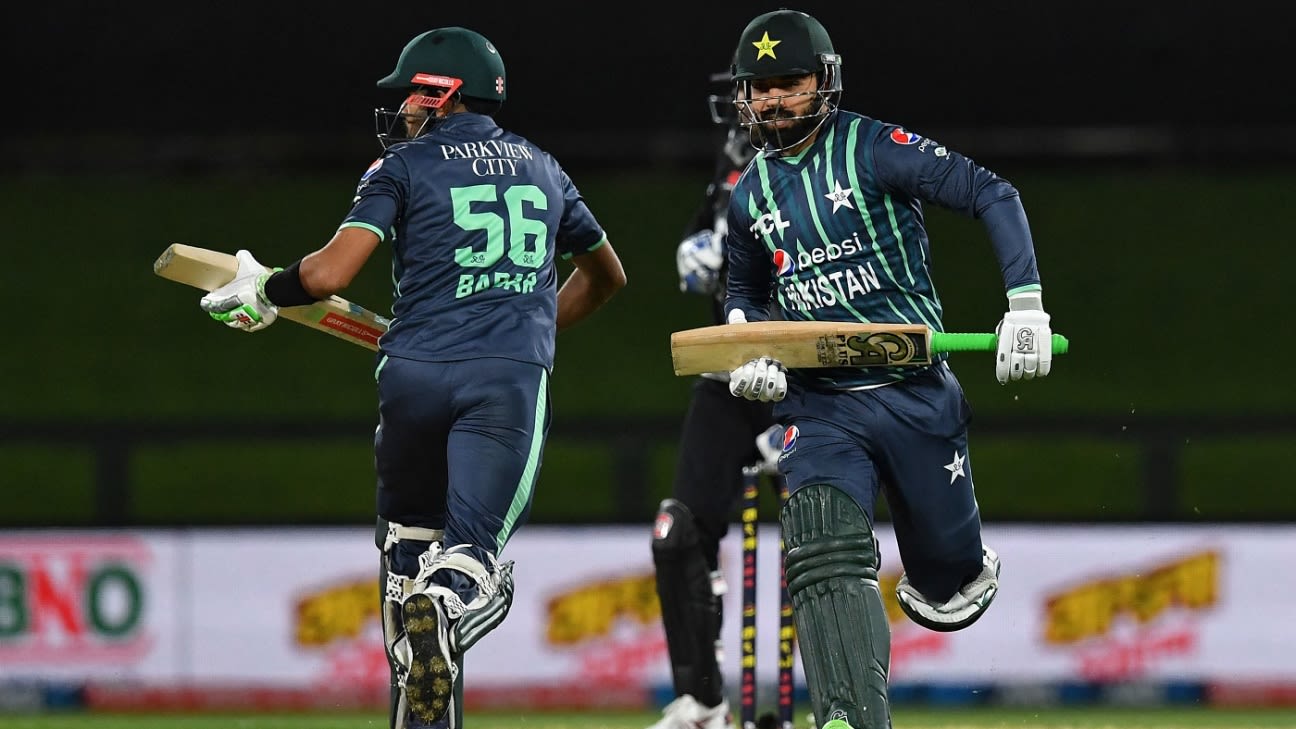 Pakistan 149 for 4 (Babar 79*, Shadab 34, Tickner 2-42) beat New Zealand 147 for 8 (Conway 36, Rauf 3-28, Wasim 2-20, Nawaz 2-44) by six wickets
On a day where everything clicked into place for Pakistan, they swept aside New Zealand to cruise to a six-wicket win. A day after Bangladesh had been given short shrift, another near-flawless bowling performance against a rusty, stilted New Zealand batting-line-up saw the hosts restricted to 147 with Haris Rauf yet again the star. In response, Babar Azam steered Pakistan’s chase with an effortless, unbeaten 53-ball 79. Quickfire cameos from Shdab Khan and Haider Ali helped Pakistan seal the win with 10 balls to spare.
New Zealand struggled to get going early on, with Devon Conway and Kane Williamson struggling for fluency during their 61-run partnership off 52 balls. The pacers cramped New Zealand for room during the fielding restrictions, while Shadab Khan and Mohammad Nawaz kept things tight during the middle. A one-over blip, during which Mark Chapman hammered Nawaz for 22, threatened to see New Zealand claw back some ground they had lost, only for the visitors to hit back and ensure there would be no further shift in momentum. The last three overs saw 17 runs scored with five wickets lost, by which stage New Zealand were hobbling.
Mohammad Rizwan couldn’t find the fluency that has been characteristic of his game for the past two years and was trapped in front by Tim Southee, before Blair Tickner sent Shan Masood back for a duck. Shadab was the wrecking ball through the middle order, complementing his captain especially well in a fluent, destructive partnership that also yielded 61 – though they took just 42 balls to get there. By then the required rate was effectively around a run-a-ball, where it stayed for the next few overs. Haider Ali and Babar smashed Tickner for 21 in the 18th over, and sealed a second successive win.
Shadab’s promotion
The clamour to have Shadab bat higher up the order has occupied much social-media real estate in Pakistan, and its immediate vindication upon its deployment could potentially have ramifications for Pakistan through the next five weeks. It is in the top four that Shadab has boasted the highest average and strike rate for Islamabad United in the Pakistan Super League, and Pakistan’s tendency to slow down in the post-powerplay overs had led to baying calls to promote Shadab reaching a crescendo.
On Saturday, Shadab showed why. Everything seemed to fall into place after Rizwan and Masood both fell towards the end of the powerplay. It prompted the allrounder’s first-ever promotion to No.4 with Pakistan, and in the absence of the high pace of Lockie Ferguson and Adam Milne, it was a very fruitful match-up. Tickner was slashed through point first ball he faced, before Ish Sodhi’s first ball was hammered over cow corner and out of the stadium.
In just six balls Sodhi bowled to Shadab, Shadab would plunder 19. In all, Shadab scored 34 off 22 balls to easy any pressure in a fairly small chase, allowing his team-mates to cruise along at a much more sedate pace. The option he gives Pakistan would appear to add another dimension to their batting, though how frequently they deem fit to ustilise it is very much an open question.
Haris Rauf dented New Zealand at the death•Getty Images
Williamson and Conway struggle

Conway is New Zealand’s highest-ranked batter, and Williamson perhaps the most reliable, but in their first home game of the season, both looked off-colour. Williamson acknowledged his side’s performance had been “scrappy”, and the 61-run second-wicket stand between the two exemplified that. Pakistan in top form with the ball aren’t an ideal opponent for your first home game of the season, and perhaps that showed.
Conway was able to find the odd four or six, but the dot balls interspersed between those boundaries only continued to add the pressure. It was perhaps telling that only after they fell did New Zealand enjoy their best passage of play with the bat, thanks to Chapman who briefly raised hopes of New Zealand posting a total in excess of 160.
It contrasted heavily with the Babar-Shadab stand, which also saw 61 runs scored. But the ten fewer balls it took made all the difference – that was exactly the number of deliveries Pakistan had to spare when the target was chased down.
An all-round bowling performance
Really, though, this game was about Pakistan with the ball. The old adage around bowlers winning tournaments bodes particularly well for Pakistan in this tri-series as two superb bowling performances see them sitting pretty at the top of the table. Rauf, Shahnawaz Dahani and Mohammad Wasim each kept the hosts on a leash during the powerplay, and backed up by the spinners later on, there wasn’t a weak link to go after.
Aside from that 22-run over, not once did New Zealand score 12 runs or more in any over, making it difficult to catch up to what the par score might have been. Rauf, Dahani, Wasim and Shadab’s 15 combined overs went for just 91, while even the one over Iftikhar bowled cost Pakistan only five. There was simply no place to hide.
Tags: Babar Azam, Haris Rauf, New Zealand, New Zealand T20I Tri-Series, New Zealand vs Pakistan, Pakistan, Shadab Khan