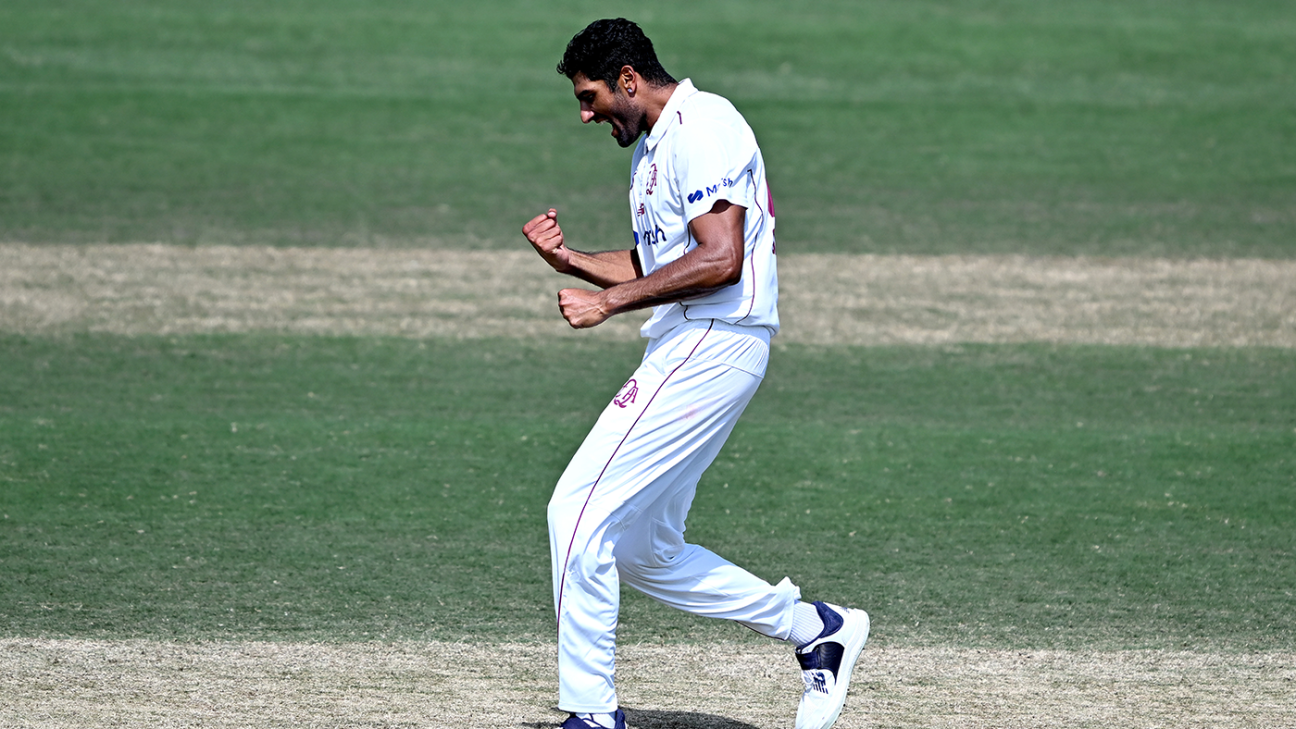 Queensland 458 (Labuschagne 127, Peirson 123, Burns 85, Khawaja 72, Meredith 5-96) beat Tasmania 147 (Steketee 4-42) and 139 (Sandhu 5-41) by an innings and 172 runs
Three sensational individual displays by Queensland players inspired an innings win for their side in the Sheffield Shield season opener.
Wicketkeeper Jimmy Peirson played an aggressive and classy hand to lift his side to 458 in reply to Tasmania’s first innings of 147 at Allan Border Field.
Tasmania’s openers were looking comfortable at 0 for 41 in reply when Bulls allrounder James Bazley threw himself to his left at square leg to snaffle a one-handed screamer to dismiss Caleb Jewell. Bazley also claimed a scalp with his first ball of the innings and the wickets tumbled.
Bazley’s timely catch was vital in the scheme of things as rain was forecast for the final day of the clash and Queensland needed wickets.
Related
Queensland pace bowler Gurinder Sandhu ripped through the Tigers who were bundled out for 139.
Mark Steketee almost claimed a hat-trick when he removed Jordan Silk and Jarrod Freeman in consecutive balls, only to see a tough chance for the third wicket spilled at slip.
Queensland’s win by an innings and 172 runs inside three days was the perfect start to their season and the Tigers were never in the hunt.
Australian Test stars Marnus Labuschagne and Usman Khawaja made massive contributors to the Bulls’ win and struck early form ahead of the Test series against the West Indies and South Africa.
Quick bowler Riley Meredith was the pick of the Tasmania bowlers who fought back to take 6 for 101 on the third morning after the Bulls were 4 for 357 overnight.
Peirson’s innings knocked the stuffing out of the Tigers who were left with too much to do to save the game.
Tim Paine claimed five catches on his return to first-class cricket. His performance was typical of a master of his craft.  The former Test captain was hardly noticed, as all good wicketkeepers are, but when a chance came his way the 37-year-old pounced to reveal that he has lost none of his touch despite a lengthy absence from the game.
Tags: Gurinder Sandhu, James Bazley, Jimmy Peirson, Queensland, Riley Meredith, Sheffield Shield, Tasmania, Tasmania vs Queensland, Tim Paine