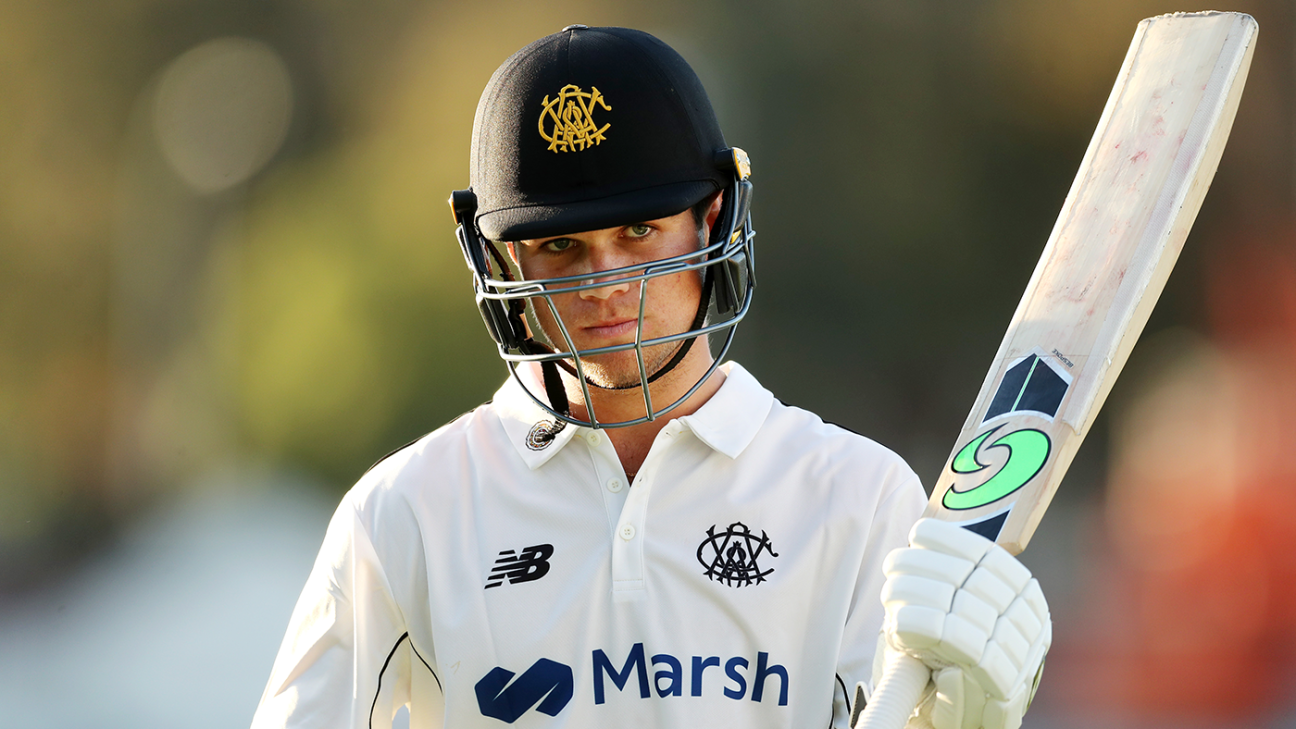 Late on day two of the Sheffield Shield match between Western Australia and New South Wales, as the shadows deepened at the WACA Ground, 18-year-old Teague Wyllie flicked a frustrated Nathan Lyon to the boundary.
As his team-mates and the sparse smattering of fans collectively rose in the terraces, Wyllie walked slowly towards batting partner Matt Kelly and finally, almost reluctantly, raised his bat.
In just his third first-class match, Wyllie became the youngest Shield centurion since Ricky Ponting in 1992-93. It was a feat made more impressive considering only two other batters compiled half-centuries in the bowler-dominated match, which WA won by eight wickets in a powerful launch of their title defence.
“He [Wyllie] said ‘tax accountants don’t celebrate when they do their tax return so I shouldn’t celebrate scoring a hundred’,” chuckled WA captain Sam Whiteman, who spoke to ESPNcricinfo after the match. “He loves batting and is an impressive young man. He feels like he’s 28.”
Related
While Wyllie’s reserved celebration caused mirth for his team-mates, it underlines his maturity beyond his age and should serve him well amid being bandied around as Australia’s next great batter. He topped Australia’s batting at the Under-19 World Cup earlier this year and was named in the tournament’s most valuable team.
“A lot of the lads take the mickey out of me for not taking the helmet off but I just don’t like the attention from it,” Wyllie told reporters in Perth on Friday.
“My old boy drilled into me when you get a hundred that the job is not done. So I’ve never been a massive fan of carrying-on…because I’m just trying to get the team into a good position.”
His 104 off 204 balls masterclass rescued WA from a precarious 100 for 6 as the No. 5 calmly batted with the tail to lift his team to 258 and an invaluable 78-run first innings lead in the low-scoring contest.
Having come through the ranks as an opener, the tall Wyllie – who stands over six foot – is already an intimidating figure at the crease but his batting is built on compact defence and eyeing the long haul. He’s perhaps a throwback to a more sedate time although can shift gears when needed. While more senior batters were undone by the seam and bounce on a tricky WACA pitch, Wyllie played straight and produced several eye-catching drives down the ground.
“Test cricket is the goal and I believe it is the pinnacle when it comes to cricket,” he said. “I’ve always loved batting for a long period of time.”
“I’ve never been a massive fan of carrying-on…because I’m just trying to get the team into a good position”•Getty Images
It is little surprise then to learn who he has modelled his game on.
“I idolised Rahul Dravid growing up,” Wyllie said. “He values his wicket more than anyone. Growing up I modelled my game on him a bit when it comes to valuing his wicket and batting for long periods. Kane Williamson is another who I try to learn a lot from.”
Wyllie, who grew up in the regional city of Mandurah less than an hour from Perth, has long been seriously devoted to cricket having eschewed playing other sports competitively. It led to “burnout” three years ago, but Wyllie’s found a better balance as he starts his professional career and enjoys playing golf and watching TV shows when he’s not carefully honing his game.
But his life has already started changing and becoming busier, as he quickly realised when he received around 500 messages from friends and family after his Shield heroics.
Surrounded by a wealth of experience, including mentor Shaun Marsh, Wyllie has received a particularly wise tip to deal with his growing stardom.
“I’ve spoken to a few of the senior guys…they got rid of social media. I haven’t gotten to that stage,” he said.
But you feel Wyllie will handle keyboard warriors similarly to how he blunts exasperated bowlers.
“I don’t go looking into social media comments because it’s just white noise and it doesn’t matter that much,” he said. “I tend to stay out of the spotlight…I love batting.”
Tags: Australia, Sheffield Shield, Teague Wyllie, Western Australia

Players resolve pay dispute with board

Masakadza called up by Zimbabwe