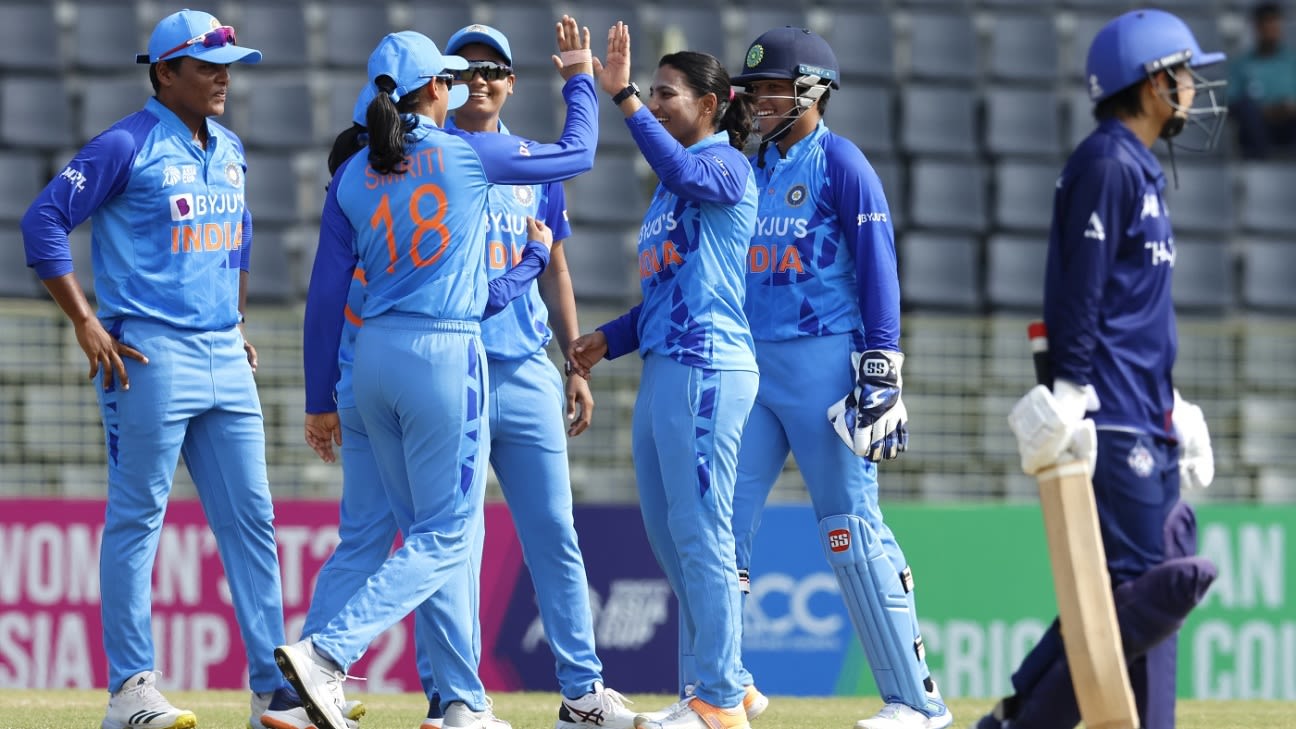 India Women 40 for 1 (Meghana 20*, Vastrakar 12*) beat Thailand Women 37 (Rana 3-9, Gayakwad 2-8) by nine wickets
India strolled to a nine-wicket win against Thailand in the Women’s T20 Asia Cup after spinners Deepti Sharma, Sneh Rana and Rajeshwari Gayakwad shared seven wickets between them. Thailand were restricted to 37, their third-lowest total in the Asia Cup, which table-toppers India then chased down in six overs, losing just one wicket.
Thailand started off cautiously, moving to just 16 for 1 at the end of the powerplay. The collapse began with Naruemol Chaiwai’s run-out in the seventh over following which Thailand lost their last eight wickets for just 17 runs.
Thailand openers cautious
Smriti Mandhana, playing her 100th T20I, once again stood in for Harmanpreet Kaur – who was out of the last game with a niggle – and opted to bowl keeping the damp conditions in mind.
Thailand openers Nannapat Koncharoenkai and Natthakan Chantham started off watchfully as Deepti straightaway found sharp turn, and took just one run off the first over. Koncharoenkai broke the pressure with a drive to the boundary off quick Meghna Singh, who was swapped for Renuka Singh for this match, and in the following over Chantham brought out the sweep and got a boundary against Deepti, showing positive intent.
But a couple of balls later, Chantham was deceived by the turn and was bowled.
The collapse begins
Koncharoenkai and Chaiwai continued their cautious approach, not taking any risks, and that resulted in Thailand playing out 27 dot balls in the powerplay. With Thailand having lost the prolific Chantham early, the onus was on captain Chaiwai to push them to a respectable total. But a quick throw from Meghna fielding at point resulted in her getting run-out for three in the seventh over.
Rana struck the very next ball, sending Chanida Sutthiruang back for a duck with a delivery that turned in sharply from outside off stump. From there on, wickets fell regularly. Koncharoenkai’s carelessness resulted in her being run-out, and Gayakwad and Rana ripped through the middle order to leave Thailand reeling at 28 for 8 by the end of the 12th over.
Nattaya Boochatham and Thipatcha Putthawong managed to stay at the crease for 17 balls but Deepti returned to break the ninth-wicket stand. Meghna accounted for the last wicket to fall in the 16th over.
An easy win for semi-final bound India
It was a straightforward chase for India. Following a quiet first over – India scored just three runs – from Boochatham, Sabbhineni Meghana and Shafali Verma managed to hit a boundary each in the next couple of overs. Following Shafali’s departure in the third over, Pooja Vastrakar joined Meghana at the crease and steered India to 22 for 1 in five overs. They finished the match in the sixth over, hitting four fours – two each – off Putthawong to guide India to a resounding win.
Tags: India, India Women, Thai Women vs IND Women, Thailand, Thailand Women, Women's Asia Cup