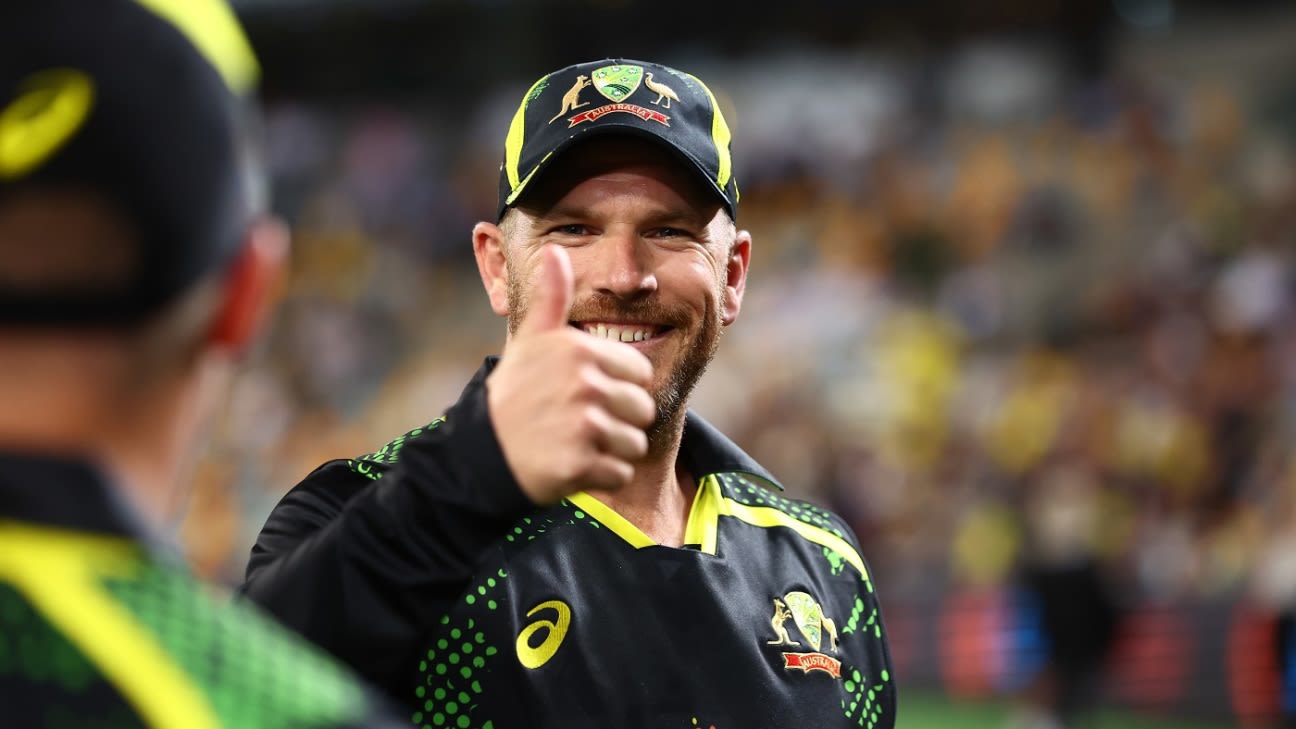 Aaron Finch has confirmed he will return to the top of the order for Wednesday’s clash with England as Australia’s T20 World Cup preparations ramp up.
Finch has spent almost his entire T20I career as opener, but he raised eyebrows by batting either at first drop or at No. 4 over the past three matches.
The move has given Cameron Green more opportunities at opener despite the 23-year-old not being in Australia’s 15-man World Cup squad.
Finch made scores of 58 and 15 in the 2-0 series win over the West Indies, and was run out for 12 while batting at No. 4 in Sunday’s eight-run loss to England.
Related
The 35-year-old will return to his customary opening spot for games two and three against England in Canberra.
“I’ll go back to the top next game, which was always the plan,” Finch said. “It was just about giving Greeny more opportunity at the top and trying things…in case he had to be called into the [World Cup] squad.”
Green enjoyed remarkable success as opener during the 2-1 series loss in India. But his return to Australia has been less fruitful, with Green posting scores of 14, 1, and 1 as opener in his past three innings.
Despite that, Green appears set to be first cab off the rank if Australia need a late injury replacement for their World Cup title defence.
England captain Jos Buttler said even he was surprised when Finch didn’t open at Optus Stadium.
“It’s a good question for them,” Buttler said. “He’s opened a lot in T20 cricket and done that really well. But he’s obviously got a plan.”
England posted 208 for 6 with Australia finishing at 200 for 9 despite the heroics of David Warner (73 off 44 balls) at the top of the order.
Allrounder Marcus Stoinis made 35 off 15 deliveries despite being struck on the heel while running a quick single early in his innings. Stoinis looked proppy while running after that, but he said the blow wouldn’t affect his World Cup preparations.
“It’s actually alright, it just stung for a little bit,” said Stoinis, who only just returned from a side strain
Australia rested Steve Smith, Adam Zampa, Mitchell Starc, Josh Hazlewood, Pat Cummins and Glenn Maxwell for the series opener against England.
Ashton Agar (side strain) was also overlooked while he builds back to full fitness, but he could be available for the next game. It means Australia could welcome back up to seven players for game two, creating a huge selection squeeze.
Tags: Aaron Finch, Australia, Cameron Green, England in Australia, ICC Men's T20 World Cup, Marcus Stoinis

T&T on the verge of thumping win

Scott Styris moves over to Auckland