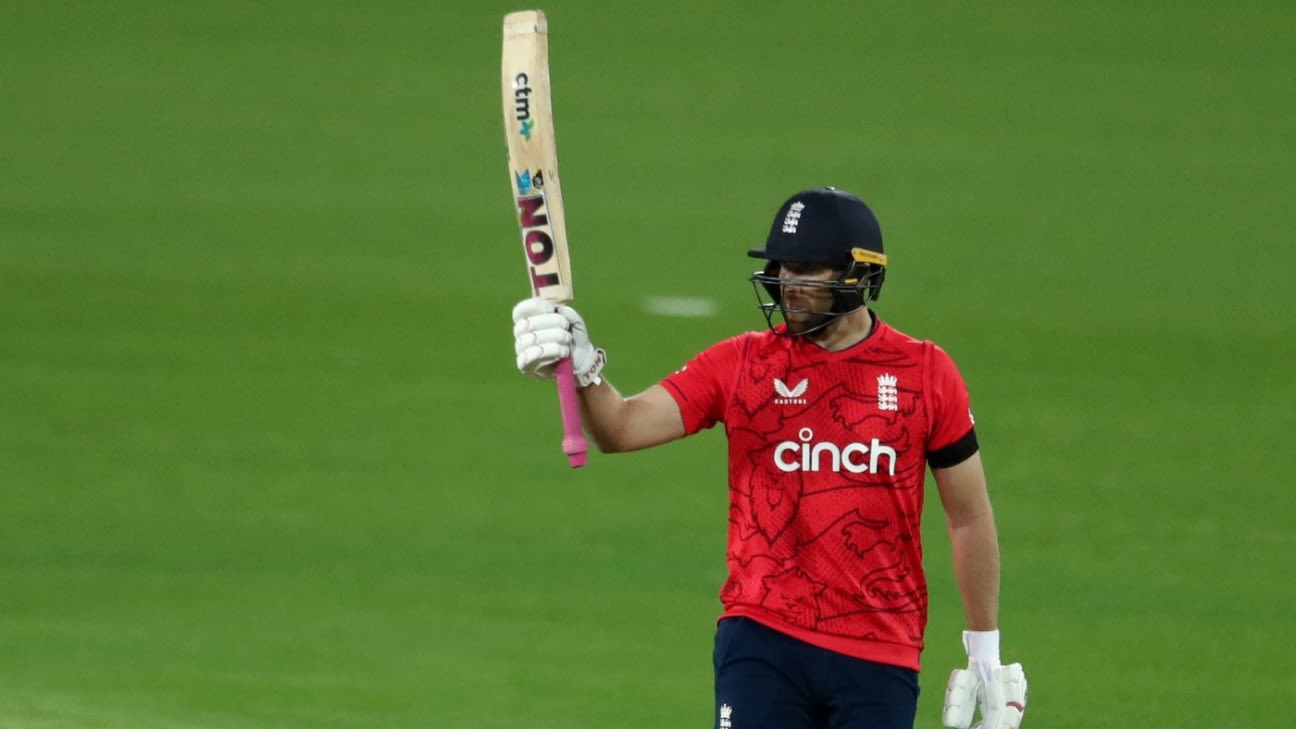 Dawid Malan has described the ECB’s process for awarding central contracts as “a slightly strange system” after he was demoted to an incremental deal.
Malan had a full central contract for the year October 2021-September 2022 but lost his place in the Test side after England’s 4-0 defeat in the Ashes in Australia. As a result, he has been shifted to an incremental contract for the year October 2022-September 2023, meaning the ECB will top up his recently-renewed Yorkshire contract rather than acting as his primary employer.
“There’s obviously a slightly strange system with the contracting system,” Malan said after hitting 82 off 49 balls in Canberra to help England take an unassailable 2-0 lead in their T20I series against Australia. He questioned the emphasis placed on Test cricket within the contract system and suggested that losing his contract might put him in “tough situations” later in the winter.
Related
“It seems heavily led towards red-ball cricket when you have players that play one or two formats of the white-ball game,” Malan said. “They are decisions that I don’t make but ultimately, it puts you in tough situations if you’re not contracted and you’re losing finances playing in tournaments in the winter.”
England’s contracting system had increasingly rewarded performances in Test cricket above white-ball cricket, recognising the number of earning opportunities that white-ball specialists have outside of international cricket through the proliferation of short-form tournaments during the English winter; of the 18 players awarded full contracts this winter, only three – Moeen Ali, Jos Buttler and Adil Rashid – appear unlikely to play Test cricket over the next 12 months.
Rob Key, the ECB’s managing director of men’s cricket, had said when the contracts were announced: “I feel we have rewarded those players who have made a significant impact over the previous 12 months and those we expect to be part of England’s plans over the next period.”
Malan is due to play for Sharjah Warriors in the new ILT20 in the UAE from January 6 to February 12, a tournament which clashes directly with England’s rescheduled ODI series in South Africa at the end of January. “Those are hurdles that we’ll get to when it gets to it,” he said.
Chris Jordan, England’s all-time leading wicket-taker in T20Is, missed on a contract altogether after holding an incremental deal last year, while Malan suggested that his own sustained success in that format should have been recognised with a full central contract.

“As players, we’d like to be rewarded for our performances for England. You’d guess that’s what contracts are for”
Malan wants more recognition for white-ball cricket

“Hopefully, white-ball cricket can get recognised as Test-match cricket does,” he said. “You have players here who have been leading wicket-takers for England that don’t have a contract, but those are decisions that I don’t make. Keysy and I have had that chat already.
“As players, we’d like to be rewarded for our performances for England. You’d guess that’s what contracts are for; and if you’re ranked top five in the world for three years, you’d hope you’d get recognised with a white-ball contract, but that’s just how it works. It’s still an honour to play for England, and you want to play and win as many games as you can for England.”
Malan started the winter slowly and admitted he “had no rhythm” at the start of England’s series in Pakistan. But he has reasserted his credentials in the last ten days, hitting 78* off 47 balls in the decider in Lahore and adding another fluent half-century in Canberra on Wednesday night.
He had slipped down the order during England’s first game in Australia, pushed down to No. 7 after Jos Buttler and Alex Hales’ bright start, but denied that he had been left with anything to prove as a result of that decision.
“I feel like I’ve proved my point a hell of a lot before,” he said. “The situation of the game just changed. We were flexible in the last World Cup: I batted No. 5 in one of the games [against South Africa] and didn’t bat in the first game [against West Indies] either because they wanted to get the run-rate [up].
“It is what it is; we’re all flexible. As soon as we get a good start, the whole team pretty much pads up and waits for a nod.”
Malan had earlier been presented with his 50th T20I cap by England’s new assistant coach Mike Hussey, and became the 11th man to reach that landmark for England. “He’s been one of my idols growing up, Mr. Cricket, so to have him present my cap and the words that he said was an incredibly proud moment for myself,” Malan said.
Tags: Australia vs England, Dawid Malan, England, England in Australia