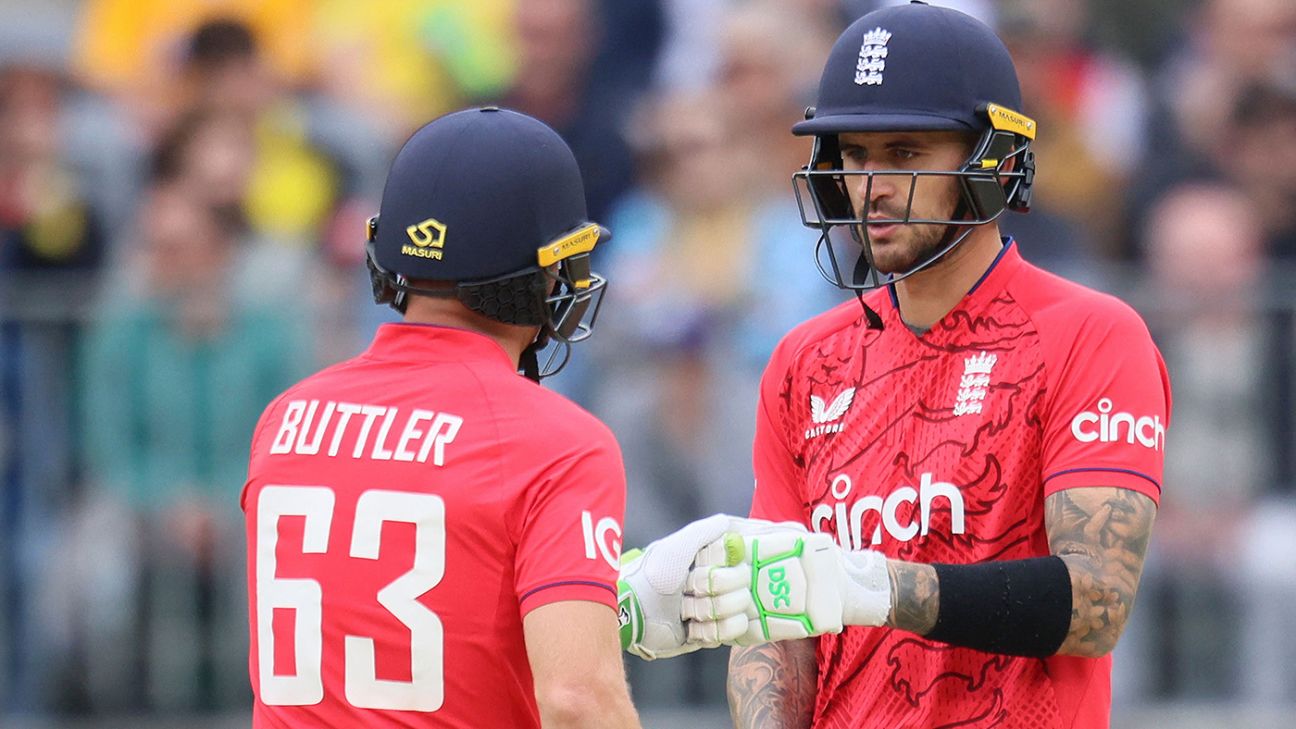 England 208 for 6 (Hales 84, Buttler 68, Ellis 3-20) beat Australia 200 for 9 (Warner 73, Marsh 36, Wood 3-34) by eight runs
Alex Hales made a statement with a rapid 84, while quicks Mark Wood and Sam Curran thwarted Australia’s bold chase as England stepped up their T20 World Cup preparations with a tight eight-run victory in the series opener in Perth.

Australia captain Aaron Finch was reprimanded and handed one demerit point after the first T20I for breaching Article 2.3 of the ICC Code of Conduct, which relates to “use of an audible obscenity”. An ICC statement said the incident occurred during the ninth over of England’s innings, with the stump mic picking up what Finch had said.
Finch accepted the sanction handed out by match referee David Boon, so there was no formal hearing.
Four demerit points within a 24-month period equates to a suspension. This is the only demerit point on Finch’s record at present, and it will stay on his record for the next 24 months.

In a record 132-run opening partnership for England against Australia, Hales and the returning Jos Buttler flattened a weakened attack to power the tourists to a huge total.
An aggressive Australia, who had dropped Steven Smith, were on pace with David Warner making his second consecutive half-century but England held their nerve through quality death bowling from Wood and Curran.
It was a return of international cricket in Perth since the women’s T20 World Cup in February 2020 after an easing of strict Covid-19 measures. The final two games of the series will be played in Canberra starting on Wednesday.
Buttler returns with bang, Hales puts hand up
Against a second-string Australia attack on a fast Optus Stadium pitch, a golden opportunity loomed for Buttler and Hales, who had been given the nod ahead of Phil Salt.
Buttler demonstrated his fitness from a nagging calf injury with a blistering assault in the opening over, smashing four boundaries off Cameron Green whose first international match on his home ground started disastrously.
In all-out attack mode, Buttler was at his brilliant best with a slew of destructive shots all around the wicket, including consecutive outrageous scoops in the fifth over against exasperated quick Kane Richardson.
Hales started slowly, by comparison, before finding his range as the pair smashed 58 runs in the powerplay. There was no lull immediately after with Buttler launching legspinner Mitchell Swepson for consecutive sixes. They notched a century stand within nine overs before Buttler finally fell in the 12th over to Nathan Ellis.
Hales then took over in similar fashion to his dominance in the BBL to almost surely cement a spot in England’s T20 World Cup line-up.
Ellis fuels late Australia fightback
Resting their frontline attack for the sole match of the series in Perth, Australia were perhaps on a hiding to nothing.
Captain Aaron Finch had hoped to take advantage of the overcast conditions and smattering of grass, but his inexperienced attack mostly copped a flogging. Green particularly struggled with a slew of half volleys and his confidence spiralled when he bowled a beamer in the 13th over.
Australia were staring down the barrel before a late fightback helped limit the damage just a little. An accurate Ellis emerged relatively unscathed earlier in the innings before bowling a superb 19th over to claim Curran and Moeen Ali.
Hitting the pitch hard, bowling a clever mix of slower deliveries, the 28-year-old was the clear standout with 3 for 20 from four overs while his fellow bowlers each conceded more than 9.75 runs per over.
It further emphasised Ellis’ unlucky omission from Australia’s T20 World Cup squad having performed reliably when called upon.
Aaron Finch was run out by a superb throw from Sam Curran•Getty Images
Warner, Stoinis keep Australia on track
Finch was listed to return as opener, but contentiously Green, who is not in Australia’s World Cup squad, remained at the top. The gamble backfired with Green’s horror match continuing when he fell for 1 to Reece Topley in the second over.
Finch entered at No. 4 but he had a short stay at the crease after being run out on 12 through brilliant fielding from Curran.
Warner continued where he left off against West Indies to keep Australia on track and he was joined by Marcus Stoinis, who returned after a side strain. Pressure had built on Stoinis after a lean period and the emergence of Green but he was in powerful form with a trio of sixes as Australia suddenly were in the box seat.
Wood, Curran thwart Australia at the death
Bowling with rapid pace, peaking at 154kph/96mph, Wood swung the match in the 15th over with the wickets of Stoinis and Tim David, who failed to score in his first international in his home town.
There was drama in the 17th over when Matthew Wade appeared to have impeded Wood in his attempt for a return catch after top-edging into his helmet. England didn’t appeal and Wade then threatened to once again be the hero at the finish.
Needing 16 runs off the final over, Wade started with a boundary to inch Australia closer but holed out two balls later as Curran bowled calmly in the clutch to seal victory for England.
Tags: Alex Hales, Australia, Australia vs England, David Warner, England, England in Australia, Jos Buttler, Mark Wood, Nathan Ellis, Sam Curran