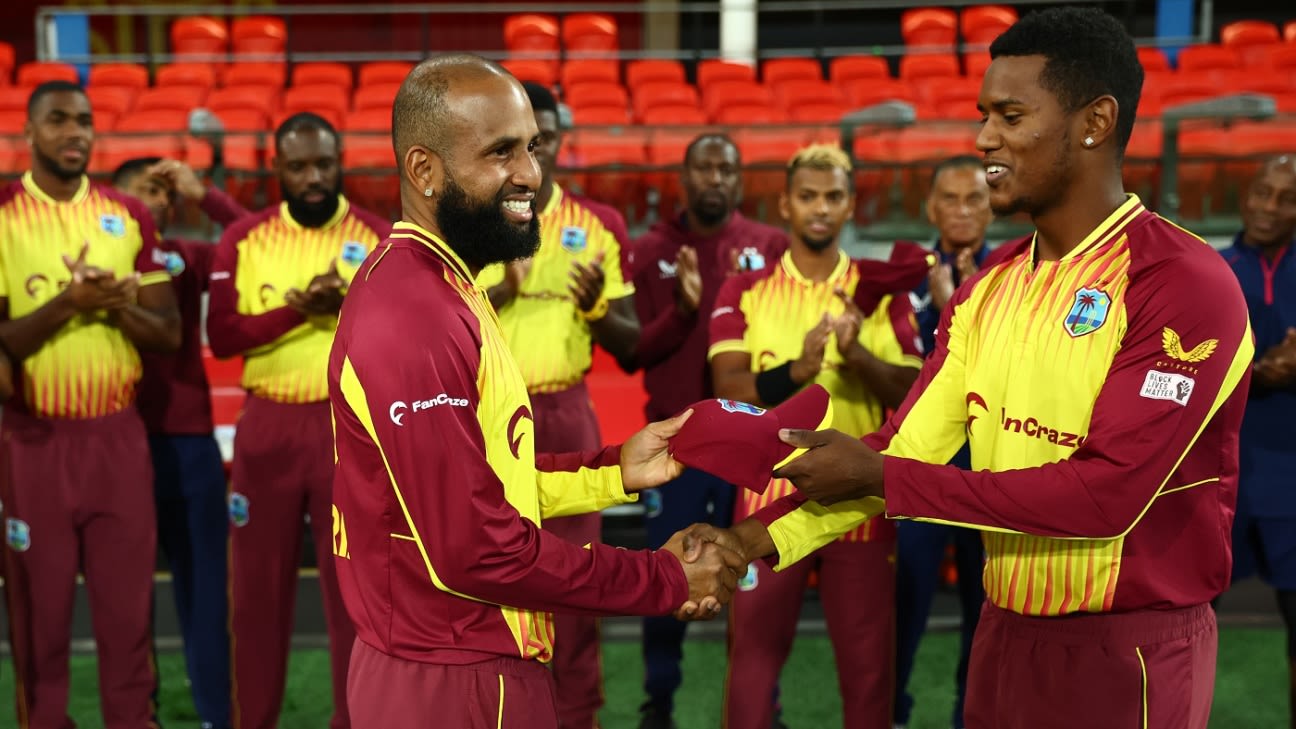 Yannic Cariah looked like he belonged. Thirty years old, on T20I debut, bowling to Aaron Finch and Glenn Maxwell in Australia for the first time. Picked ahead of Akeal Hosein. Selected ahead of Fabian Allen and Hayden Walsh.
He bowled like a veteran with impeccable control, forcing a mistake from Maxwell who can maul inexperienced legspinners in his sleep.
In just his fifth career T20 game, Cariah took 1 for 15 from four overs, bowled 13 dot balls and conceded one boundary against the reigning world champions on their home patch.
Was he surprised?
“The funny thing about this, when you work your entire life for something, the work you put in, confidence goes within yourself,” Cariah said. “I’m very confident in my ability and what I can do. What I believe in. Nobody can take that away from me.”
Yannic Cariah has spent his entire career hiding in plain sight. It’s all been there for anyone to see yet few have seemed to notice.
Related
An unbeaten 110 in the 2010 Under-19 World Cup third-place playoff against Sri Lanka, playing alongside Kraigg Brathwaite and Jason Holder. A member of the famed Queen’s Park Cricket Club in Trinidad, home of some of West Indies’ greatest-ever players. Five first-class centuries for Trinidad and Tobago. Leading run-scorer in West Indies’ first-class competition in 2016-17. Two first-class five-wicket hauls. Captain of the West Indies Emerging Team that won the domestic 50-over competition in 2019-20. An impressive List A bowling record.
Yet he hasn’t played in the CPL since 2016.

“I saw [Adam] Zampa bowl and I saw the lengths he was bowling, so I know with my style of bowling once I hit my areas it’s going to be difficult for anybody to play”

“That’s not my fault,” Cariah said. “That’s the people picking the sides. I have no control over that.”
When you meet Cariah, you can see how he might be underestimated and even overlooked. He is very softly spoken. He doesn’t carry himself with a swagger.
But there is an inner confidence and belief in his ability that only begins to show the longer you speak to him.
It’s a confidence and a belief that shouldn’t surprise anyone given he has learned the game through watching videos of Shane Warne and Brian Lara. But it took a little while after the Under-19 World Cup to find his place in domestic cricket.
“I’m a genuine allrounder,” he said. “But when I started off, I made my Trinidad debut as a legspinner. And then I found it difficult to maintain my spot as a legspinner because of other bowlers. So I put some more emphasis on my batting. I made my comeback as a batter, and then after my batting took off, my bowling was always there. I never neglected [either] of them. I just kept getting better and better over a period of time.”
Despite leading the West Indies Emerging Team to their title in 2019-20, Cariah then went two years over the Covid-19 pandemic without playing a single domestic match. But his self-belief never abated during that time.
“I’m blessed with a gift to play cricket,” Cariah said. “I always believe that I can make it to the top without giving up. Once I don’t give up. I guarantee I’m going make it.”
Yannic Cariah made his international debut against New Zealand•AFP/Getty Images
After a two-year absence from domestic cricket, he made 72, 72, 18 and 100 in his first four first-class innings for Trinidad and Tobago earlier this year. He also bagged 4 for 59 against Leeward Islands. After years of no one noticing, someone finally did. West Indies selector Desmond Haynes noticed.
Cariah was picked for West Indies A against Bangladesh A in a first-class match in August and acquitted himself well enough to be called up for his ODI debut against New Zealand, which led to his selection for Australia. Cariah noted the jump in intensity from domestic to international level.
“You have to think a lot faster and have a lot of clarity in what you’re doing, to execute your skills and be decisive in what to do,” he said. “Because if you bowl a bad ball it will be put away easily. They ain’t going to miss any bad balls.”
But there were hardly any bad balls on Wednesday. He beat Maxwell and Finch four times in his first two overs. His length was immaculate, a product of his maturity and his ability to read the conditions quickly on his first trip to Australia.
“I figured out which lengths were best for me to bowl and my style of bowling and I adapted really, really quickly,” he said. “What made it even better for me is Australia bowled first. And I saw [Adam] Zampa bowl and I saw the lengths he was bowling, so I know with my style of bowling once I hit my areas it’s going to be difficult for anybody to play.”
It’s the type of attitude his hero Warne would have been proud of. Cariah might not have the bluff or bluster or swagger of the late, great legspinner, but he has the same mindset.
“Whatever I do, I play to win,” Cariah said. “I don’t play to compete. I play to win.
“I’m a very quiet person. But if they get to know me, I’m very cool. I do my best in everything I do. Good things happen to me. I have a positive mindset. I’m very confident within myself.”
Tags: Australia vs West Indies, ICC Men's T20 World Cup, West Indies, West Indies in Australia, Yannic Cariah