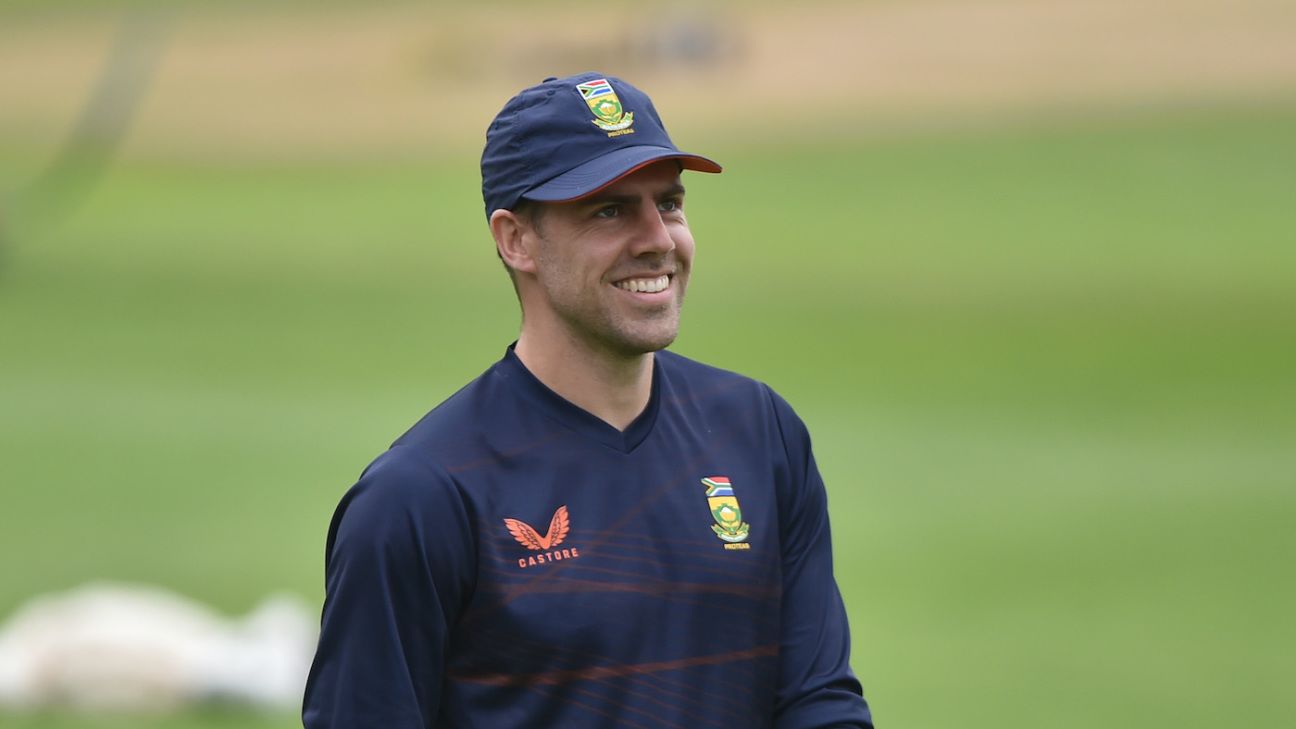 While England’s schedule continues to overwhelm them, South Africa are itching to play a little more, at least in the longest format, and are concerned with getting the balance between travel and playing days right.
Asked how he views the current calendar, Anrich Nortje explained that he anticipates tours to become shorter as travel normalises post-pandemic, leaving sufficient time for being at home and playing.
Related
“I don’t have the answers, but I would love for us to play more Test cricket,” Nortje said. “We are very busy. We are on the road most of the time but recently, we’ve been away from home for a long time but the cricket has been limited. Hopefully, with no more bubbles, we can be at home a bit more, have a bit more off time and then get straight into cricket. We don’t need to prep as much as in the past, so that’s maybe something we can work around.”
During the worst of the Covid-19 pandemic restrictions, South Africa travelled to Pakistan, the Caribbean, Ireland, Sri Lanka, the UAE, and New Zealand and hosted England (including a partially abandoned white-ball tour), Sri Lanka, the Netherlands (also abandoned), India, and Bangladesh. Their bubbles were the hardest in New Zealand, where they had to undertake a mandatory quarantine and could not leave their rooms, and eased at home, where they had access to large resorts, with some leisure facilities. Since travel opened up earlier this year, they have travelled to India and now England.
Nortje is expected to continue playing in all formats for South Africa having regained full fitness since the IPL. He was part of the T20 World Cup playing group last year but then spent six months on the sidelines nursing a back and hip injury, before traveling again to this year’s IPL.
“It’s extremes. You get injured, you are at home for a long time. You get back into cricket and you’re on the road for a long time,” he said.
“Hopefully, the body can stay in good nick. Playing all formats is tough. I have been playing a lot of T20 cricket the last while and now back into ODIs. It’s really nice to get some rhythm, to get used to some bigger loads and hopefully, build it up for the Tests. I am really excited about what’s coming up. We’ve got a busy schedule. I don’t think we will be at home for a long time, but I am really excited about what’s coming up.”

“Hopefully, with no more bubbles, we can be at home a bit more, have a bit more off time and then get straight into cricket.”
Anrich Nortje

What South Africa have ahead of them immediately is an opportunity to win their first bilateral ODI series in England since 1998 with victory in the second match at Manchester. They beat England by 62 runs in the first ODI, with Nortje starring with four wickets. Although the series does not count for World Cup Super League points, South Africa are taking value from what it can teach them about consistency in the format that has been their weakest since Mark Boucher took over in December 2019 and about closing out series when they are in the lead.
They went 2-0 up in their recent T20I rubber in India, only to find themselves locked at 2-2 ahead of a washed-out decider.
“We mentioned in India that the third game was going to be a final for us, and then the fourth game was a final and we didn’t pull through. We have to be on it,” Nortje said. “Every time we get close we want to try and pull through. We want to go for the kill. We don’t want to drag it out longer.”
For that reason, South Africa are likely to keep the same XI (apart from Andile Phehlukwayo, who is concussed) that beat England in the opener – including both Nortje and Lungi Ngidi – who are also expected to play in the upcoming T20Is and Tests on a surface that should offer the quicks more. Nortje is looking forward to some bounce from the Old Trafford surface, after the benign track at Durham. “From what I understand, it might play a little better than the previous venue,” he said.
But even if it does have more of the quicks, not all of the big-name players on both sides will be playing in Manchester as South Africa rested Kagiso Rabada for the series and England’s Mark Wood and Jofra Archer are both out injured.
“It’s sad to see they are not here and it’s always nice to see them competing against us. It’s always nice to have the fastest guys, at least one or two in a team,” Nortje said. “Mark Wood and Jofra have played major roles in the England side, so I’m hoping they can have a speedy recovery and get back and produce what they have been in the past.”
Tags: Anrich Nortje, England vs South Africa, South Africa, South Africa in England