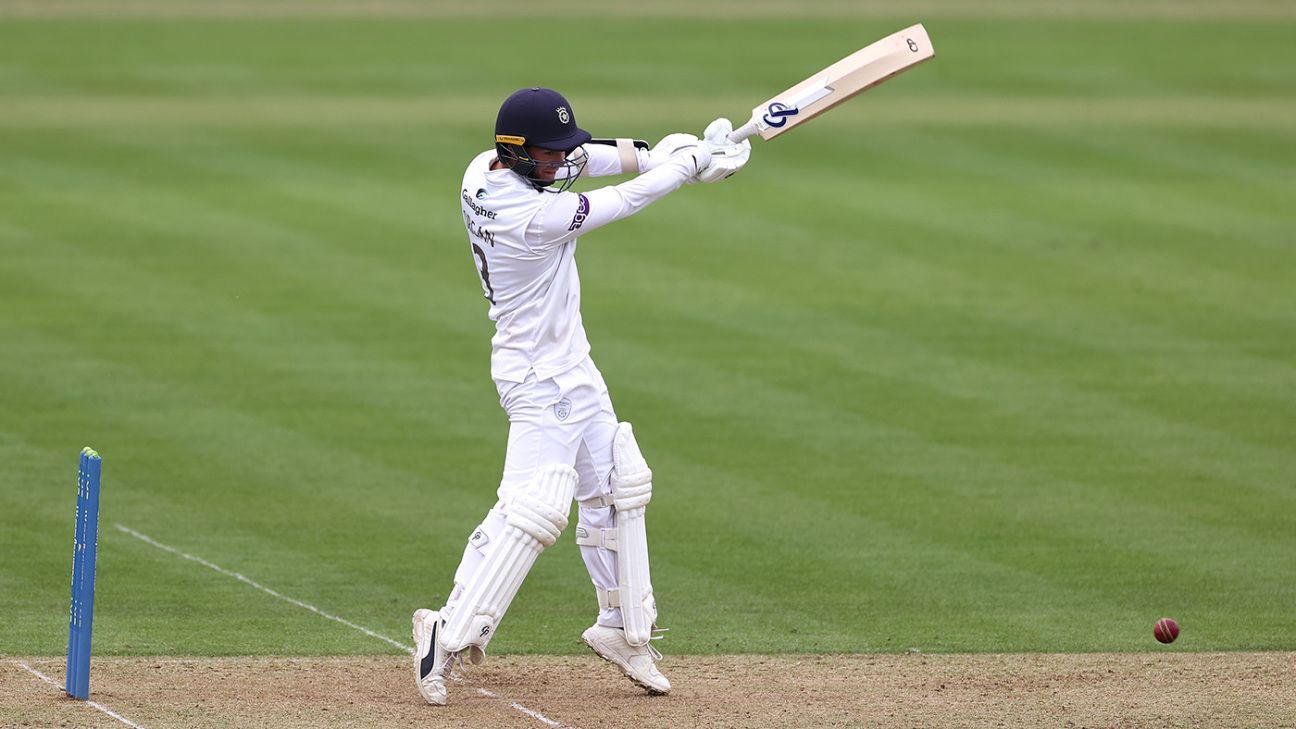 Hampshire 203 for 2 (Organ 93*) vs Gloucestershire
Hampshire’s cricketers owe a lot to James Vince. It is not three days since his chilled captaincy and brilliant run-out of Luke Wells guided them to victory in Vitality Blast. Yet rarely, perhaps, have ten cricketers felt quite so much gratitude towards their skipper as they did at 10.30 this morning when Vince won the toss and chose to bat on a College Ground that was already slow-cooking.
But having the chance to bat first on a flat Cheltenham wicket was one thing; making good use of that opportunity quite another. So most of Hampshire’s cricketers, regardless of speciality or stripe, will also raise a large glass of iced cordial, fortified or otherwise, to Felix Organ, who batted through the entire 72 overs of a day that was shortened to protect the health of both players and spectators. Organ did not quite reach his century; only the Fahrenheit thermometer managed that. But when play ended at 4.43pm, the opener was 93 not out, having batted for 286 minutes and faced 208 balls in broiling heat.
Did we make too much of the extreme weather? Perhaps so. After all, Ian Holland, who contributed 48 runs to his opening stand of 117 with Organ, is used to batting in 40 degrees Centigrade in Australia and other players today will have played in India or Sri Lanka where such conditions are routine.
Related
Then one watched Nick Gubbins return to the pavilion after being adroitly caught by James Bracey – between his ankles – off Ollie Price’s offspin for 35. Gubbins had batted in all for 82 minutes, but an hour of his innings had been played after tea. Aside from his disappointment and weariness, it was plain that his shirt clung to him and could have been wrung out when he removed it. His face was caked in sweat. And Organ batted for over three times as long as Hampshire’s No. 3 to play the innings that may yet establish a foundation for victory.
Yet this was a day Gloucestershire’s players might also review with modest satisfaction. Graeme van Buuren used eight bowlers but none of them delivered more than the 17 overs sent down by the slow left-armer Zafar Gohar, and he was the only member of the attack to stay on for longer than six overs. No one obviously wilted; the fielding remained keen and competent on the browning outfield.
The afternoon session was the home side’s best. After lunching on 79 without loss, Hampshire could add only 44 runs in 25 overs before tea and they lost Holland, who was leg before to Zak Chappell when looking to play across the line a shade. The highlight for the visitors was the pull off Gohar that brought Organ his ninth four and took him to his fifty off 71 balls. Thereafter the cricket fell into torpor as the day’s calefaction tightened its grip. Iced coffees were the norm; bearers of refreshment were greeted like long-lost chums; even the aristocratic correspondent of The Times found his few misdemeanours forgiven when he sauntered in with ten cans of water.

James Bracey takes the catch between his errrr, ankles

So we did not make too much of the heat. That was plain in the behaviour of the spectators, many of whom retreated to enjoy hospitality beneath giant beige gazebos on the Sandford Road or at the Chapel Lawn End. Shaded in their lighted caverns, these well-fed tribes gazed out at the cricket and no doubt applauded much of it. No blame is attached to their behaviour. Gloucestershire has to make its dosh somehow and the Cheltenham Festival is very much about spectators, too. Yet rather than sharing in the spectacle, many cricket-lovers seemed somehow distanced from it. But then it was a day when everything was justified by the heat. People returning to their cars found they had become ovens. A union flag flew from one of the College buildings as though to stiffen everyone’s resolve and remind us that Britain can make it.
And there was another, perhaps subtler, subtext to things. For in its way, this was also a day of reclamation. Many of those watching Organ hit his 16 boundaries or Chappell thunder in and pull his tripes out for the cause were attending their first festival for three years. The 2020 season was all but lost to Covid and last year’s event, although well-attended and competitive, was a thin affair, marred by anti-social distancing and barely suppressed fears. This July, people could return to this much-loved festival but they did so in the knowledge that some friends were not as fortunate. Set beside those recent summers, one day of tyrannical temperatures was discomfiting in the extreme, little more. Dealing with its fundamental causes, mark you, is a different matter.
After tea, Cleeve Hill was gauzed with heat to a thickness that even Ivor Gurney can hardly have known. All the same, three days after they triumphed in the steamy clamour of Edgbaston, Hampshire’s cricketers offered gentler entertainment even as they sweltered at Cheltenham. They were accompanied by Graham Lloyd, who had umpired the Blast final, while across England other professional cricketers were also displaying their skills. As this unforgettable Tuesday boils to a close, it is surely fitting we should be grateful to them.
Tags: County Championship Division One, Felix Organ, Gloucestershire, Hampshire, Hampshire vs Gloucs