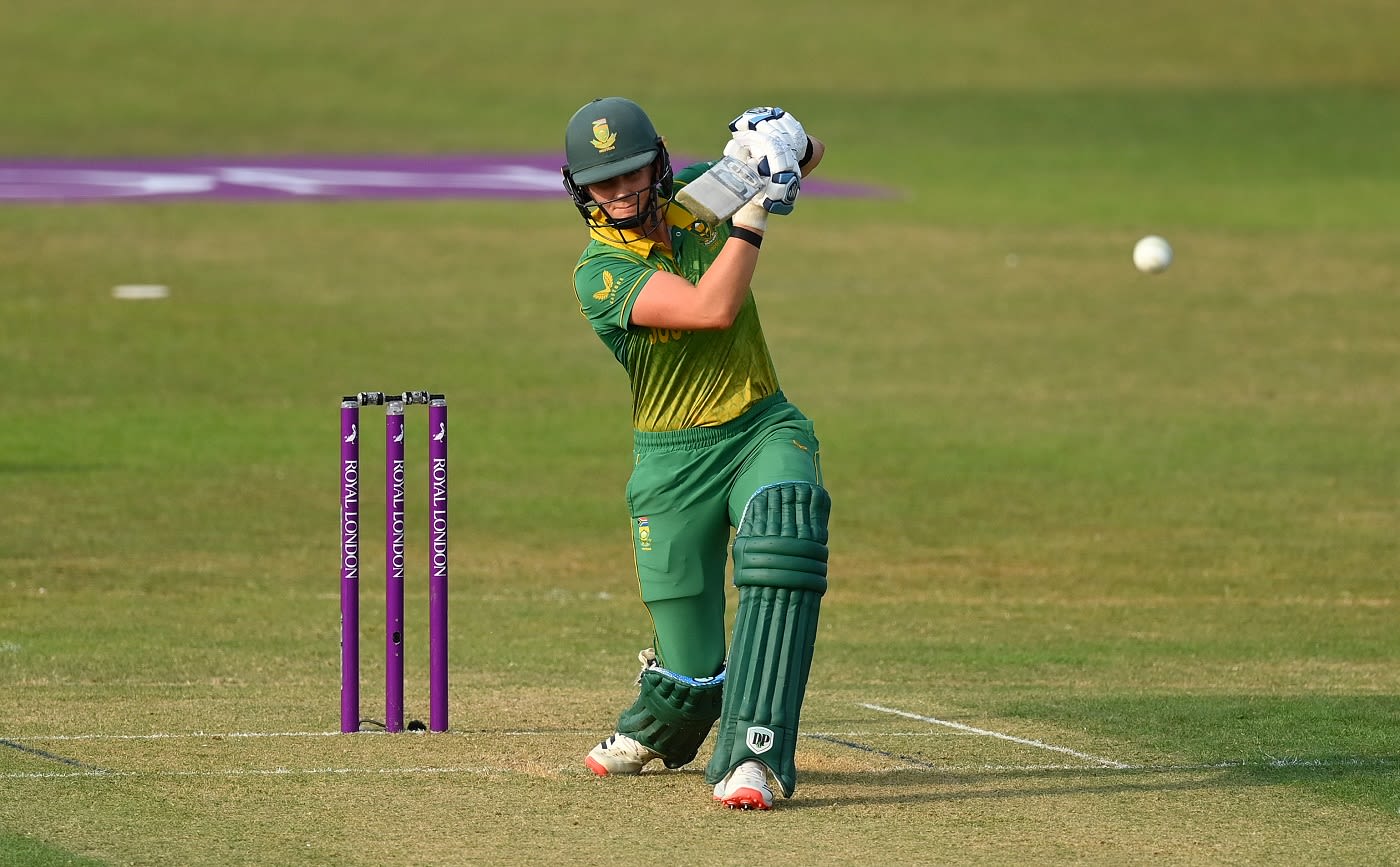 Laura Wolvaardt is in search of big runs as South Africa look to turn around a disappointing tour of England ahead of the Commonwealth Games.
Wolvaardt was one of three South African players to post half-centuries on an excellent batting pitch in Leicester on Monday, but they were trumped by Tammy Beaumont’s 107-ball 119 and fifties to Emma Lamb, Heather Knight and Sophia Dunkley as England won the final ODI by 109 runs.
Related
Wolvaardt’s 56 was her third ODI half-century in four games, including 89 against Ireland last month – it was also the ninth time she has passed the mark this year. But she is desperate to convert those innings into hundreds, as she did at home against West Indies in January.
“I’ve got quite a few fifties in my career now and don’t have that many hundreds yet so it’s definitely something that I’ve been thinking about and obviously it didn’t go right today again,” Wolvaardt said.
“I’m happy that I’m starting to start a bit faster. I’m getting to the fifties a bit quicker, but now, the next step is to try and take it further.”
Encouraged by the fact that her back-to-back fifties in the last two ODIs against England have come at a strike rate above 100, Wolvaardt believes kicking on may be more of a psychological matter than a technical one.
“It’s maybe just something that I’m going to have to look into, to try and restart or pretend that I’m on zero and have to get to fifty again,” she said.
“I think it is a mental thing out in the middle. I feel I do all of the hard work to get to fifty and then I think maybe relax for a second too much. I think next time I get in there I just need to really focus harder to get to that hundred.

“The T20 series is just around the corner so we’ll have to have some good, hard meetings to see where we’re going wrong and how we can come back refreshed and ready”
Laura Wolvaardt

“Also I don’t think it’s a lack-of-focus type of thing, but hopefully it’s just something that I can continue working on. I’m still quite young so I still have a bit of time hopefully. But yeah, it definitely will be a goal to try and get to three figures more often.”
In T20Is, which is where the teams will now switch their focus for three matches which end their multi-format series and double as preparation for the Commonwealth Games starting next week, Wolvaardt only has three fifties from 36 appearances. The most recent of those came against India in Lucknow more than a year ago.
South Africa must win all three T20s against England, starting with Thursday’s match in Chelmsford, to draw the multi-format series, with England leading 8-2 following their 3-0 sweep of the ODIs and the drawn Test.
After providing a solid contest in the rain-hit Test – where Wolvaardt twice fell for 16 to debutant seamer Issy Wong – South Africa appear a more demoralised unit after struggling to compete in the ODIs. They have also had to contend with the shock retirement of Lizelle Lee, Wolvaardt’s former 50-over opening partner, and an ensuing social media furore.
Wolvaardt acknowledged that the team needed to find a way to pick themselves up heading into the next phase of the tour.
“It’s never nice to lose and especially… we’ve lost the last couple by 100 runs or something,” Wolvaardt said. “The T20 series is just around the corner so we’ll have to have some good, hard meetings to see where we’re going wrong and how we can come back refreshed and ready.
“This was our last ODI for a long while so I think we’ll just be looking to be completely refreshed with a new focus to T20 cricket and have some good chats around that. That’s going to be our focus for a while going forward so hopefully we can start that off with a bit more momentum than what we have now.”
Tags: Laura Wolvaardt, South Africa Women, South Africa Women in England