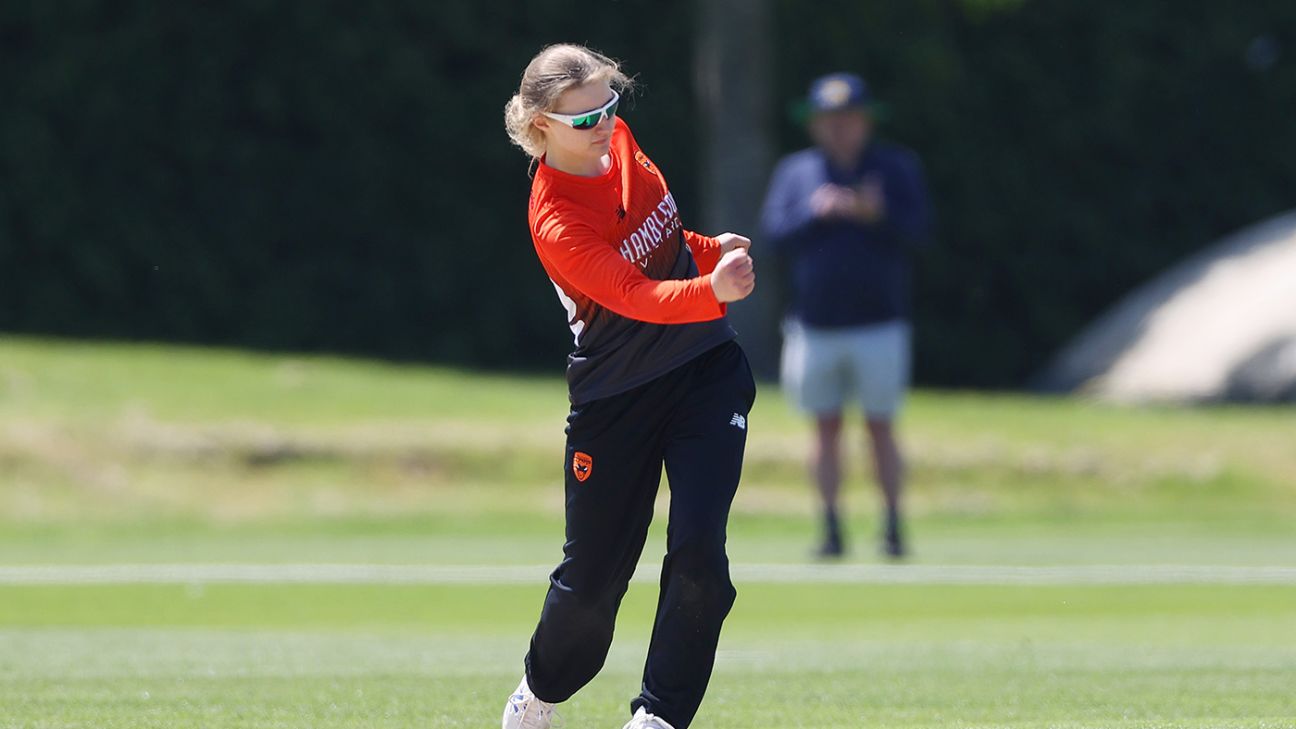 Southern Vipers 233 for 9 (Scholfield 74, Hill 55, Coppack 4-48) beat Sunrisers 222 for 8 (Griffith 65) by 11 runs
Charlie Dean returned from England duty to claim three wickets as two-time winners Southern Vipers professionally remained unbeaten in this year’s Rachael Heyhoe Flint Trophy.
Offspinner Dean was the leading wicket-taker in the recent ODI series against South Africa and brought that form to the Ageas Bowl with a tight 3 for 31 in 10 overs.
Georgia Elwiss also picked up 2 for 50 as Vipers turned pythons to strangle winless Sunrisers to a 11-run defeat, despite Cordelia Griffith maintaining her form with 65.
Earlier, Kate Coppack claimed 4 for 48, after a seven-over opening spell of 4 for 37, to leave Vipers 38 for 5 inside nine overs, but Paige Scholfield and Chloe Hill’s maiden half-centuries at this level resuscitated the hosts to a defendable 233.
Related
Vipers have got themselves into a pickle a few times this season. They were 35 for 3 and 74 for 4, against South East Stars before clocking up 306, and against Thunder, they lost three wickets for two runs, albeit after a 153-run opening stand.
So, when Coppack had quaffed the top order with a relentlessly accurate 4 for 37 to leave Vipers 38 for 5, having chosen to bat first, there wouldn’t have been the cataclysmic worries that other teams would have faced.
Mady Villiers was the first to strike when she had Georgia Adams lbw when trying to work the ball into the legside. Then Coppack, raised in Cheshire and with international wickets for Peru to her name, flung into action.
The fast bowler only had four wickets in her first eight Rachael Heyhoe Flint Trophy appearances but had Dean leg-before in her third over before bowling former international Georgia Elwiss through the gate.
Scholfield may have scythed the hat-trick ball to point but Ella McCaughan chipped to midwicket and Emily Windsor flashed a drive to slip to give Coppack her third and fourth.
Kate Coppack in her delivery stride•Getty Images
The inevitable recovery came in the form of a 105-run stand between Scholfield and Hill. The former took a punchy attacking route out of the collapse by pummelling the short boundary with flicks and cuts.
There were moments of style, most notably a glorious cover drive early on and a slog-sweep off Grace Scrivens. A swept six off a full toss was also included on her way to a 42-ball fifty.
Hill, on loan from Central Sparks, was less stylish, but her stickability complemented Scholfield. Her own half-century came in a sedate 103 deliveries, with five either straight or pulled boundaries coming in her 55.
After Scholfield holed out to deep midwicket for 74, Tara Norris joined Hill for a 51-run stand. The USA international was run out trying to get Hill to her milestone, with Hill and Lauren Bell dismissed before the 50-overs were up.
Sunrisers steadfastly refused to take risks in the chase and therefore the modest rate got away from them – as proved with only 28 runs coming in the first 10 overs.
Griffith, on the back of 74 against Western Storm, was unflappable in the 74 balls needed to reach back-to-back fifties. Naomi Dattani’s 34 only included a pair of boundaries but plentiful nudges, with 74 added with Griffith. Dean had earlier bowled Scrivens with her second delivery and would now have both Dattani and Villiers bowled.
Having struck five boundaries in her first 56 balls, Griffith failed to hit another in her further 53 deliveries to highlight the problems Sunrisers were having timing the softer balls on a slow wicket. She was leg-before to Adams, before Elwiss bowled Mia Rogers.
Jo Gardner bashed 43 off 45 in a 56 stand with Jess Olorenshaw to give Sunrisers a glimpse of stealing back the win. But Bell bowled Olorenshaw in the penultimate over and Adams comfortably defended 17 off the last over.
Tags: Charlie Dean, Chloe Hill, Cordelia Griffith, Kate Coppack, Paige Scholfield, Rachael Heyhoe Flint Trophy, Sunrisers, Vipers vs Sunrisers