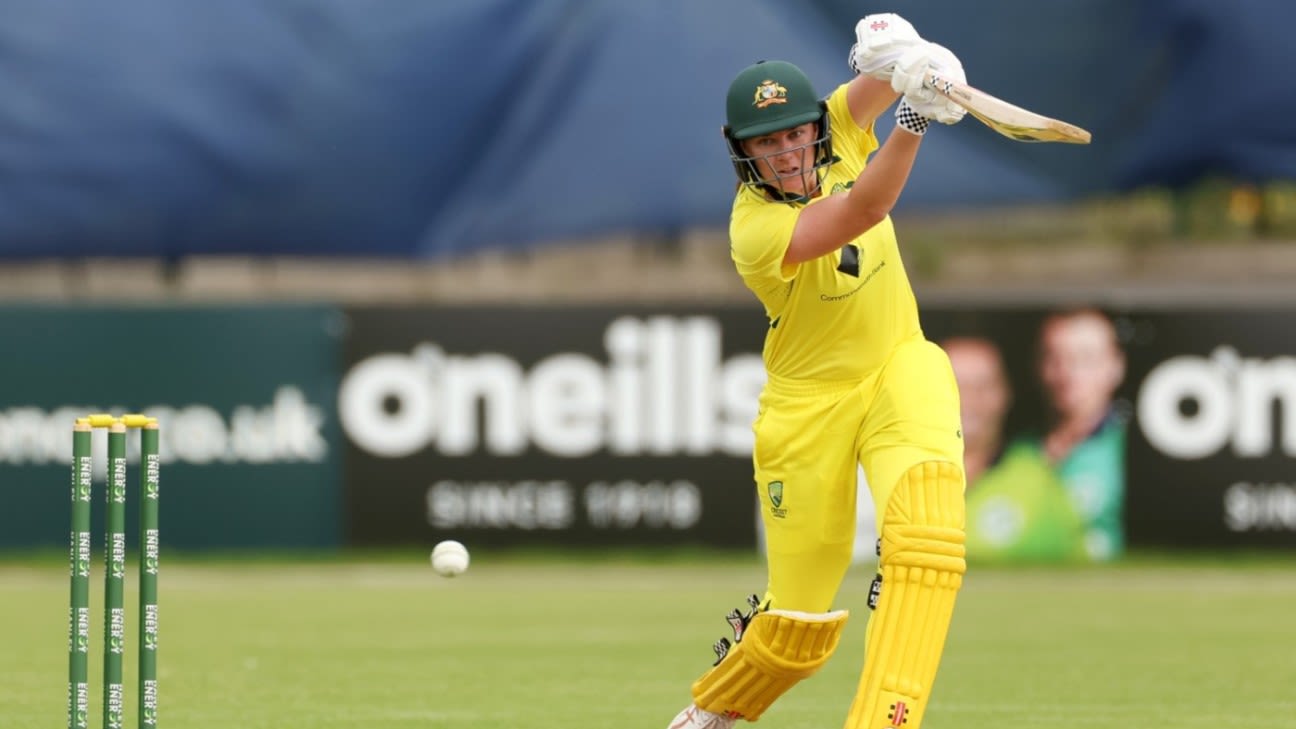 Australia 182 for 4 (Lanning 74, McGrath 70) beat Ireland 119 for 7 by 63 runs
Four times Tahlia McGrath has batted in T20Is, and four times she has been player of the match. Her extraordinary start in the format, having only debuted last October, continued against Ireland in Bready as she and captain Meg Lanning combined to set up a convincing Australia victory.
The pair added 135 for the third wicket, a record for Australia, as they overcame a slightly sluggish start against some tight Ireland bowling to pile up 182 which the home side did not come close to challenging.
When McGrath was dismissed in the final over it gave her a T20I batting average for the first time – the small matter of 247. She had struck 11 boundaries in her 45-ball stay having arrived in the fifth over when Beth Mooney clubbed a loopy full toss to mid-on after the early dismissal of Alyssa Healy lbw playing across a straight delivery.
Australia had been held to 39 for 2 from the powerplay but the eighth over marked a change of gear when Lanning twice picked up Arlene Kelly over the leg side for six. Seven out of the next eight overs went for double figures while overall Australia managed 100 from the second half of their innings.
Lanning and McGrath matched each other: the captain’s fifty came from 31 balls with McGrath’s coming off 30 deliveries, having at one stage been 11 from 12 balls.
“It was good fun batting with Meg,” McGrath said. If there was one shot I could steal off anyone, it’s that flick off the legs for six. It’s incredible. She was so calm at the crease, she makes things happen so it’s very nice batting with her.”
Megan Schutt struck in the first over of the chase when Rebecca Stokell skewed to point and later in the innings would become the second Australian to 100 T20I wickets when she removed Mary Waldron.
Jess Jonassen had success in her first over of the tour, getting Gaby Lewis caught at cover, after missing the opening two matches having tested positive for Covid before leaving Australia. Meanwhile, Alana King continued her wicket-taking form with another two scalps.
However, Australia’s wide count was again high as they conceded 15 meaning their tally for the three matches is now 47 runs from wides.
“I think we’re shaping up really well,” McGrath said. “There’s a little bit of fine tuning to go [like] tidy up our fielding a bit, a few too many extras, but we’re always striving to improve and we’re on the right track.”
They have one more match left in the series, against Pakistan on Saturday, which will likely determine who finishes top of the table.
Tags: AUS Women vs Ire Women, Australia Women, Ireland Tri-Nation Women's T20I Series, Ireland Women, Jess Jonassen, Meg Lanning, Megan Schutt, Tahlia McGrath