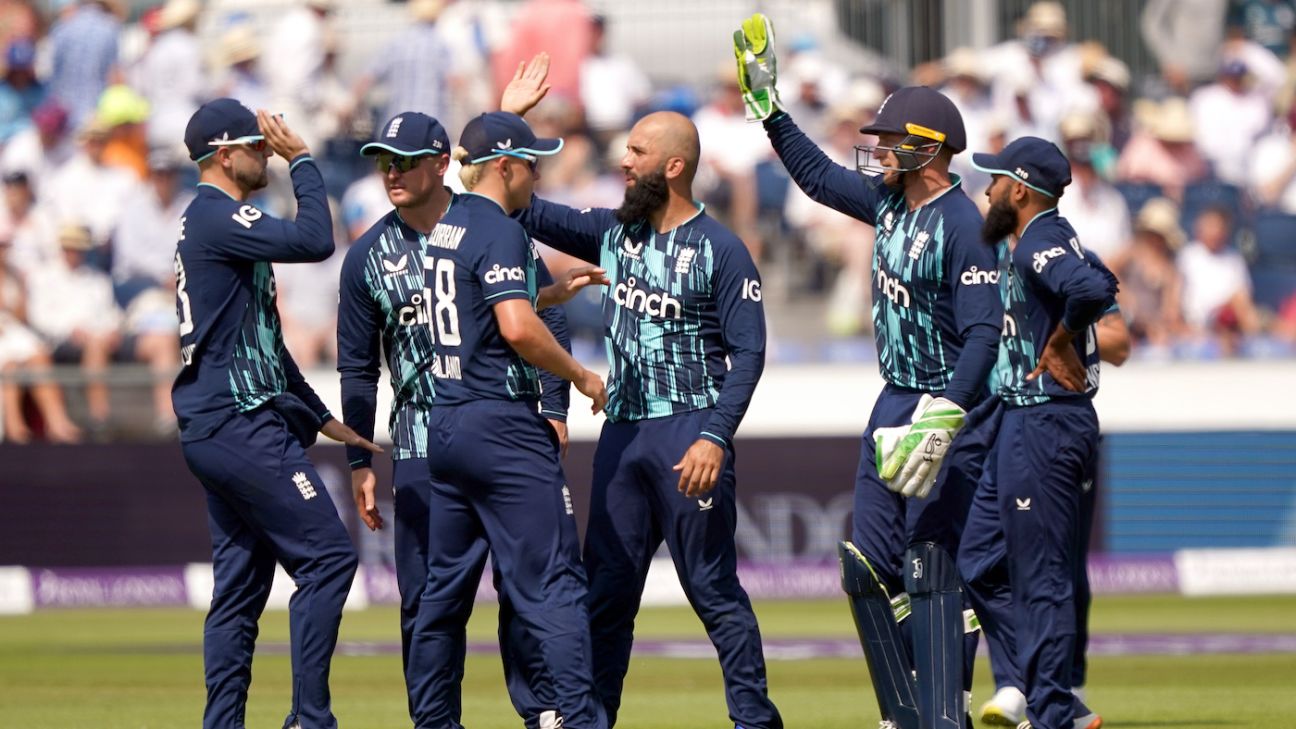 Determining who will come out on top in Sunday’s third ODI is a tough call to make. And by the end of this page, you probably won’t be any closer to knowing.
That’s probably a bad way to start a match preview for this winner-takes-all affair. But over the last few days, England and South Africa have played twice and produced two wildly different results. Such have been the margins of victory – the Proteas by 62 runs in the first ODI, the hosts by 118 in the second – it’s hard to gauge just how good these two teams really are. At the very least, the events at Headingley will give us the confidence to say one team is better, even if purely based on the scoreline from a short series.
Perhaps England are slight favourites? The quick turnaround from Friday’s ODI in Manchester was expected to work against Matthew Mott’s troops. But the rain-reduced 29-over match, which was essentially won nine overs into the Proteas chase, has created a modicum of room in the schedule. Enough for an earlier night and a well-deserved lie-in on Saturday ahead of Sunday’s 11am start.
It’s worth remembering it was only last Sunday that England failed in the third ODI against India, which had just as much on the line. They were short of a competitive total (259), Siraj-ed early and then Rishabh-ed in the case to lose by five wickets with almost eight overs spare. Did they ch… actually, let’s not use that word in present company. But arguably, they did, even if India were superior in almost every department for all but that second ODI at Lord’s.
As we get to the three-quarter stage of an absurd 12 white-ball games in 24 days, it is only natural for enthusiasm to wane. But the manner of the equalising victory at Emirates Old Trafford – Liam Livingstone and Sam Curran’s rescue act to get England to 201, then an exemplary left-arm-seam-bowling performance to remove five of the top six for just 27 – has created a sense of returning to the old, best-in-the-world days. That kind of domination, particularly from off the ropes (England were 62 for 4) was a staple of the 2015-19 vintage. At the very least, the familiarity of who England once were will be a shot of adrenaline that’ll get them through the weekend.
There are plenty of improvements still to be made, particularly on the batting front, but it was noteworthy that Sam Curran – player of the match with a quickfire 38 and the wicket of David Miller – spoke of reassessing in-play to go big and using those learnings to take apart South Africa’s attack in the first six overs: “The situation I came in at (101 for 6 in the 18th over), me and Livi had a conversation about match-ups. You saw the way Livi exploded, we know what he can do, it was fun to be out there with him. Obviously, the message from Jonny was that the powerplay was a big part and the guys had them 6 for 4.”
The flip side to Friday was South Africa were so blown out of the water that they could pop on the blinkers and view this as an anomaly, as most professional outfits do. Any self-flagellation off the back of recording their joint-second-worst ODI total should be meek given they smoked a cool 333 for 5 a few days earlier in the baking Chester-le-Heat.
Dwaine Pretorius’ nibbly seamers proved more than useful with a career-best 4 for 36 in helpful conditions both overhead and underfoot that are likely to be replicated on Sunday. The forecast suggests we will definitely get rain and be in line for another reduced encounter, which will provide an interesting contrast at a venue that has been one of the fastest-scoring T20 grounds in the world in recent years. Whether 50 overs apiece or otherwise, expect an engaging contest.
Tabraiz Shamsi and Keshav Maharaj could play a key role in the middle overs•Getty Images

Liam Livingstone‘s 38 was as brutal as it was overdue in the second ODI. The characteristic six-hitting lifted those in the stands at Manchester who braved the rain, at their loudest when he swung his third consecutive six off Anrich Nortje. The South African isn’t usually the type to be put under that kind of duress, and there was a moment after the fourth ball of that over scuttled away for four over the wicketkeeper that it felt like he was being mocked. Livingstone has a knack of making the very best look very apologetic, and the knock reinforced what we have come to know of him. But the overriding sense is there is so much more he can give in the 50-over format. Without wishing to be a cynic, or even a tad ungrateful, the 28-year-old’s habit of clearing the fences more or less on command can sometimes feel like a party trick. His ODI career is only 11 matches old, but the fact he has just a single half-century in 10 innings feels like a waste of a cricketer who could have it all.
When Joe Root said he has preferred facing the red rather than the white ball this summer, he wasn’t lying. A subdued Dukes has been countered by a white Kookaburra singing thanks to relatively un-English limited overs pitches. In turn, expansive opener batters who have gotten used to occupying the prime short-format batting spots have been tamed accordingly. Quinton de Kock is the latest to find himself hindered, with scores of 19 off 27 and 5 off 17 in his first two knocks. It’s not so much he needs a score – at the time of writing, he is averaging 46.71 with a strike rate of 103.15 this year, exceeding the career numbers in those metrics – but there is a sense he can only be kept quiet for so long. He’ll have three T20Is to come against England and two against Ireland, followed by a stint with Southern Brave in the Hundred to take something of worth from this English summer. Provided he can find a way to make it beyond the opening quicks, the first of his 2022 souvenirs could come on Sunday.

Jos Buttler is likely to put out the same XI as much by design as circumstance. A top three of Roy-Bairstow-Salt is exactly the amount of sustained firepower England would like in theory before Root, replicating a previous top trio of Roy-Bairstow-Hales, bearing more teeth than Cerberus. Then again, changes are hard to make when there are no spare batters (Harry Brook left to play Championship cricket for Yorkshire) and Brydon Carse has been ruled out after bruising his big toe in the first ODI. Matthew Potts, who sat out the second, will warm the bench again.
England (possible): 1 Jason Roy, 2 Jonny Bairstow, 3 Phil Salt, 4 Joe Root, 5 Moeen Ali, 6 Jos Buttler (capt & wk), 7 Liam Livingstone, 8 Sam Curran, 9 Craig Overton, 10 Adil Rashid, 11 Reece Topley.
Keshav Maharaj was phlegmatic following defeat in the second ODI and the messaging within the South Africa squad – primarily among the coaches – was there is no need to panic. As such, expect the same starting XI barring any late injury concerns.
South Africa: 1 Quinton de Kock (wk), 2 Janneman Malan, 3 Rassie van der Dussen, 4 Aiden Markram, 5 Heinrich Klaasen, 6 David Miller, 7 Dwaine Pretorius, 8 Keshav Maharaj (capt), 9 Anrich Nortje, 10 Lungi Ngidi, 11 Tabraiz Shamsi.

As discussed earlier, the heatwave has well and truly passed and normal service will be resuming up in Leeds. This was supposed to be the ground that would be a change from the bowler-friendly limited-overs tracks served up throughout the last month. England have no excuse not to pool all their knowledge and experience accrued over the previous five ODIs into the last one of the season.

“I just want us to continue on that path that we’re on and play that positive brand of cricket – but we can do it better. We haven’t fired with the bat in our whole white-ball summer and we know how dangerous we’ll be when we do that.”
Jos Buttler hopes his batters close out the ODI summer with a much-needed bang on Sunday
“I don’t think we need to change a lot. We need to keep up our confidence and believe in our cricket. We believe in our game and the brand of cricket we play and we’ve got to stick to it as much as possible.”
Panto-villain of the moment for his sightscreen antics, Henrich Klassen urges his teammates to stick to their normal gameplan
Tags: England, England vs South Africa, South Africa, South Africa in England