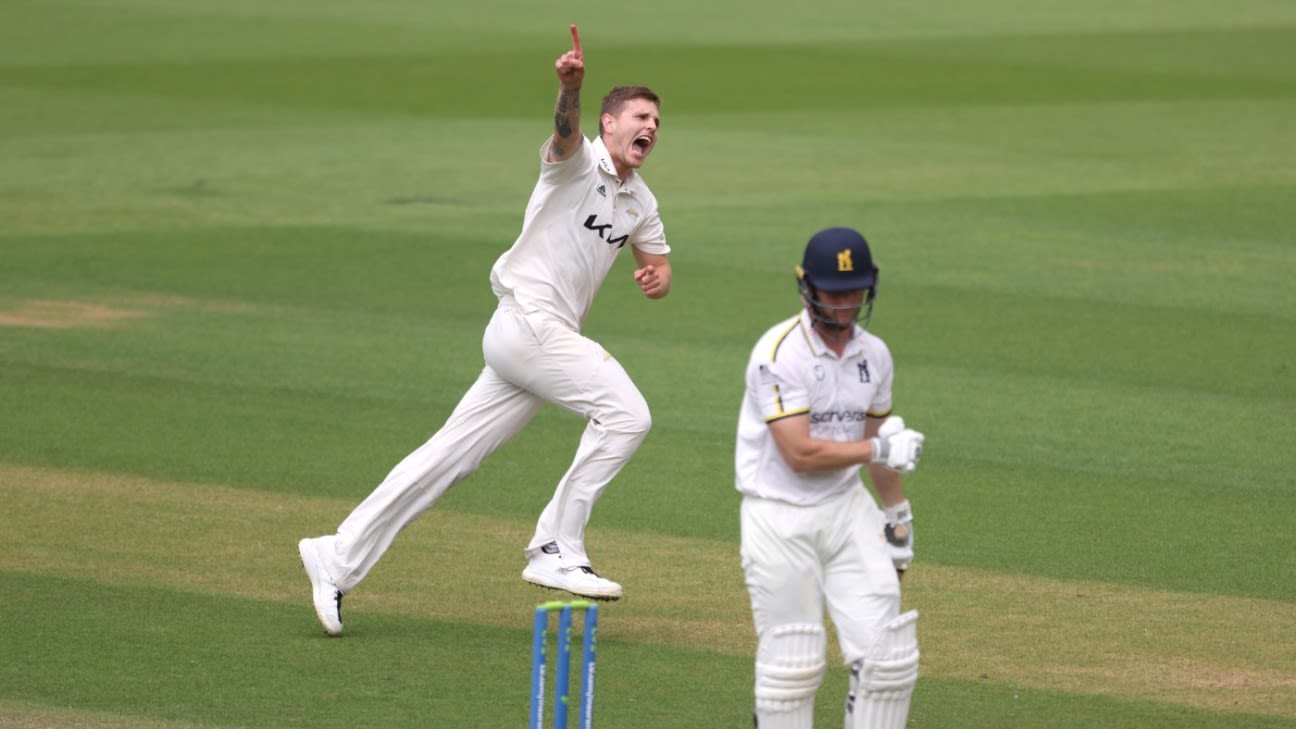 Warwickshire (Sibley 43, McAndrew 40*, McKerr 3-39) vs Surrey
Warwickshire battled their way to 240 for 8, despite no one passing fifty, after being put in to bat by unbeaten Division One leaders Surrey in their LV= Insurance County Championship match at the Kia Oval.
Seven of their top eight got to 22 or more, without going on to a significant score, although allrounder Nathan McAndrew remains 40 not out after a determined effort in the final session of a hard-fought day.
Dom Sibley’s 43 was the best individual score, while Surrey’s five-man pace attack all impressed with 19-year old seamer Tom Lawes perhaps the stand-out bowler with figures of 2 for 38 from 20 overs.
Surrey were missing their Australian spearhead Dan Worrall, who took 11 wickets in the game in last week’s win against Essex, due to a shoulder injury suffered in the warm-up.
Related
Conor McKerr, called up to replace Worrall, ended the day with 3 for 39 and Jamie Overton took 2 for 47 despite having to lead the field for treatment to a sore finger on his bowling hand, sustained when hit a painful blow at first slip in mid-morning.
15 minutes before the toss, McKerr had been at home in Weybridge getting ready for a day trip to London with his wife Paige, but was on the field of play two hours later. “It was a great telephone call to get, telling me to get straight to the ground, although obviously it was bad luck for Dan Worrall getting injured in the warm-up,” he said.
“I think sometimes the best way is being thrown in like that, because you just go out there and concentrate on doing what comes naturally. I thought our whole seam attack bowled very well all day today, and everyone has a lot of confidence at the moment so we are all feeding off one another.”
On a grassy surface, Warwickshire initially did well to get to lunch at 71 for 2 with Sibley twice dropped on 19 and 28 but always showing typical grit in the tricky conditions.
Cameron Steel, on as a substitute fielder while McKerr travelled to the ground, could not hold a difficult low diving catch to his left at a widish fourth slip when Sibley edged Overton and later in the morning session the Warwickshire opener saw Ryan Patel spill a straightforward chance at third slip off Lawes.
Surrey’s pace battery also beat the bat with regularity but their only successes before lunch came when Alex Davies, on 23, edged Lawes’ second ball to Overton at first slip and then, at 65, when McKerr – having taken the field just after 12.15pm – struck with the first ball of his second over to have Chris Benjamin held by Will Jacks at first slip for 7, pushing crookedly at one that lifted and left him.
The first hour of the afternoon session was a particularly attritional affair and Warwickshire’s first innings looked in danger of grinding almost to a halt when Sibley’s defiance was ended by Lawes, who made a ball lift sharply to have the former England Test opener caught off the face of his bat by keeper Ben Foakes, and Sam Hain was dismissed seven overs later by Jordan Clark.
Warwickshire were 107 for 4 in the 54th over when Hain, having made it to 27, edged the persevering Clark to second slip where Ollie Pope held on to the catch at the second attempt.
McKerr’s second spell just before tea saw an increase, at last, in the scoring rate with his first three overs back costing 30 runs. But both Michael Burgess, twice, and Will Rhodes were fortunate to see short-arm pulls at the pacy McKerr result in top-edged fours over the keeper and slip cordon and Rhodes also thick-edged the same bowler between slips and gully for another streaky boundary.
Burgess, however, fell for 22 to Overton’s fourth ball after tea, in the session’s second over, when he edged an outswinger to Foakes and McAndrew almost immediately needed an on-field concussion test when, trying to hook, he was hit flush on the helmet by Overton.
Rhodes was livid with himself for flashing at McKerr, in the 76th over, and edging to Foakes to depart for a 74-ball 34, and Danny Briggs left shaking his head in disbelief when, after scoring a useful 23 in 46-run seventh wicket stand with McAndrew, he chipped a full toss from Overton straight back to the bowler.
And Surrey were further boosted when McKerr won an lbw appeal against Brad Wheal, on loan from Hampshire, to dismiss the tailender for 4 with the day’s penultimate ball.
Tags: Conor McKerr, County Championship Division One, Daniel Worrall, Dom Sibley, Nathan McAndrew, Surrey, Tom Lawes, Warwickshire, Warwickshire vs Surrey