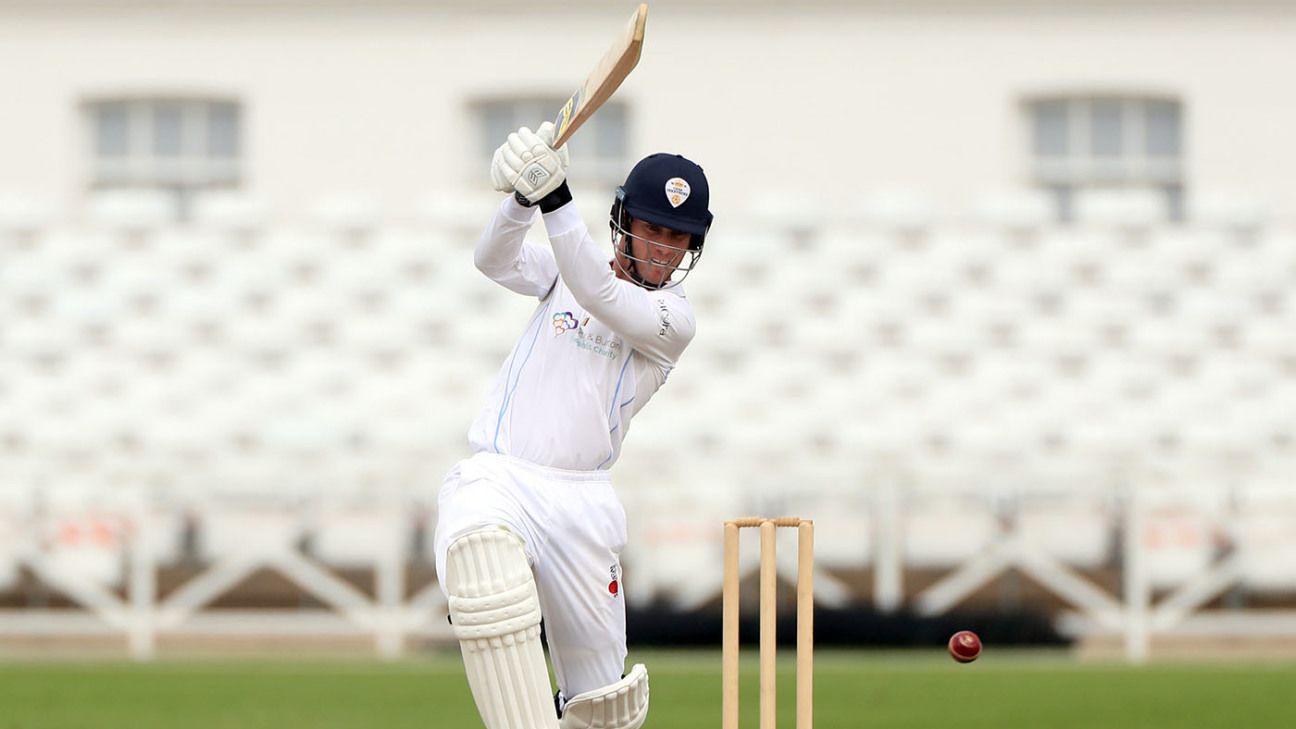 Derbyshire 318 (Guest 109, Madsen 74) and 249 for 4 (Reece 86, Came 70) drew with Nottinghamshire 618 for 8 dec (Duckett 241, Hameed 196, Patterson-White 54)
A combination of rain and determined batting denied Nottinghamshire victory on the final day of the LV=Insurance County Championship match against Derbyshire at Derby.
The Division Two leaders needed 10 wickets but managed only four as Derbyshire ensured there would be no late drama with openers Luis Reece and Harry Came scoring half centuries.
Nottinghamshire’s chances of taking another big step towards promotion were dealt a blow when rain prevented any play in the morning and took 21 overs out of the day’s allocation.
Came and Reece then took their stand to 161, Derbyshire’s first century opening partnership of the season and the highest against Nottinghamshire at Derby, with the former scoring his maiden first-class 50.
Former Derbyshire player Ben Slater removed him for 70 before Reece went for 86 and although Dane Paterson struck twice in the final session, the home side were 249 for 4 when the teams shook hands on a draw with 16 overs remaining.
Nottinghamshire’s bowlers were already facing a tough task before steady rain meant play did not start until 1pm which shifted the odds heavily in favour of a stalemate.
There was little in the pitch for the seamers and after Reece pulled Paterson to the boundary to bring up the 100, Came clipped Liam Patterson-White through midwicket to reach 50 from 143 balls.
Reece completed his from 172 balls and the pair had used up 28 overs before Came chopped Slater’s occasional off-spin into his stumps to spark wild celebrations from the bowler which seemed bizarre given the match situation.
Reece was dropped at leg slip off Patterson-White on 82 but in the last over before tea, he played an expansive drive at the left-arm spinner and was caught at slip.
But Derbyshire still had eight wickets in hand and Nottinghamshire’s last chance came with the second new ball which arrived with 33 overs remaining.
Paterson struck in his second over when Brooke Guest was beaten by a full length ball which trapped him in front and kept the game alive by removing Leus du Plooy.
The Derbyshire captain could do nothing with a ball that moved late to take the outside edge with his side still 67 runs behind and 26 overs remaining.
But Wayne Madsen and Hilton Cartwright dug in for 10 overs to secure the draw with Nottinghamshire taking 16 points and Derbyshire 12.
Tags: County Championship Division Two, Derbyshire, Harry Came, Luis Reece, Nottinghamshire, Notts vs Derbyshire