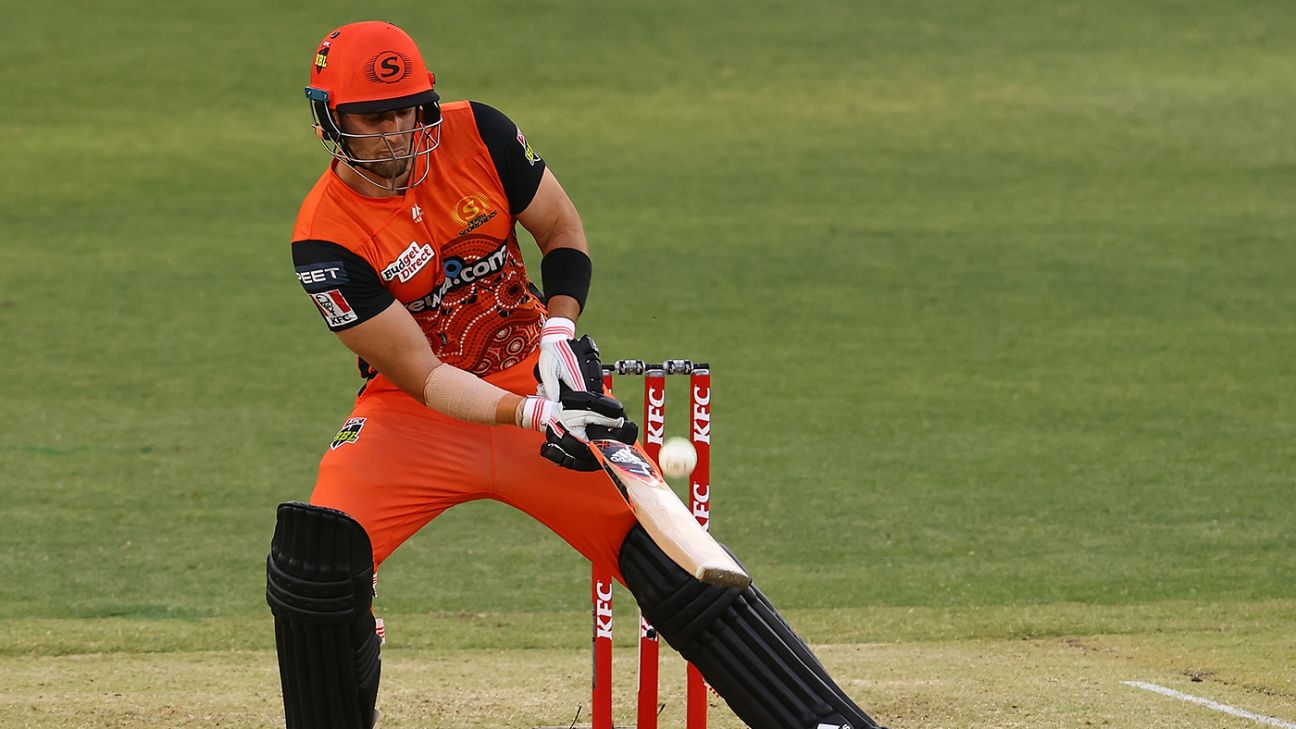 Liam Livingstone looks likely to be a Platinum pick in the upcoming BBL overseas draft as the headline act of 70 Englishmen who have nominated themselves, but availability will be a key consideration for teams, with a number of players likely to head to other leagues halfway through the tournament.
Livingstone is set to be the most sought-after English player among a group that includes Alex Hales, James Vince, Tymal Mills, Reece Topley, Matthew Potts, Brydon Carse, Lewis Gregory, Matt Parkinson, Richard Gleeson and Ollie Pope.
The nominees who are also involved in England’s current white-ball set-up are notionally available for the whole tournament, given England do not have any international limited-overs games scheduled in either December 2022 or January 2023, with their first series of the new year set to be an ODI series in South Africa that is likely to be played in February after the new South Africa T20 league is completed.
England have a Test series in Pakistan set for early December meaning that the likes of Pope, Potts and possibly Parkinson could be late arrivals to the BBL if all three tour Pakistan.
But of greater concern for the BBL is the fact that a number of English players, including Livingstone and Hales, are likely to leave the BBL halfway through to play in the proposed UAE T20 league in January, given they are likely to earn substantially higher wages for a shorter commitment there.
Related
The BBL is scheduled to run from December 13 to February 4, but South Africa and UAE leagues are set to start in January. The UAE league is proposed to run from January 6 to February 12. Both Ricky Ponting and Usman Khawaja raised concerns last week about overseas players only nominating for the first half of the BBL, leaving themselves open to joining the other leagues and leaving the BBL short on star overseas players.
The BBL is offering AUD340,000 (roughly £196,000) to a select group of Platinum picks, while those who have nominated themselves in the Gold category are set to earn approximately AUD260,000 (roughly £150,000). Those are guaranteed wages no matter how many games the players have nominated themselves for.
The challenge for BBL clubs is to evaluate if the likes of Livingstone and Hales are worth selecting in the draft at those prices if they are only available for the first half of the tournament, with a large portion of each wage to count in the AUD 1.9 million salary cap.
Livingstone played in the BBL two seasons ago with Perth Scorchers and has expressed an interest in playing there again. Scorchers are also interested in having him back but they can’t use a retention pick because he did not play last year and they have pick No. 6 in the draft order, which means Livingstone could well be snapped up in the first five picks.
Alex Hales could be a retention pick for Sydney Thunder•Getty Images
Sydney Thunder can use their retention pick to retain Hales given he did play for them last season. They have already lost one half of one of the most successful opening duos in BBL history with Khawaja joining Brisbane Heat. If Hales is only available for the first half of the tournament, Thunder will need to find not one but two openers to fill the gap.
There are a number of other English players who are eligible for a retention pick. Evans and Mills could be retained by Scorchers. Vince could be a retention pick with Sydney Sixers having had a very successful relationship with that club in recent years. Topley (Melbourne Renegades), Joe Clarke (Melbourne Stars), Jordan Cox (Hobart Hurricanes), Iain Cockbain (Adelaide Strikers) and George Garton (Adelaide Strikers) could also be retention picks for clubs having all played last season. But clubs only get one retention pick, with Strikers likely to take Rashid Khan.
Like Livingstone, Jake Ball (Sydney Sixers), Danny Briggs (Adelaide Strikers), Benny Howell (Melbourne Renegades), Gleeson (Melbourne Renegades) and Gregory (Brisbane Heat) have all played in the BBL previously but are ineligible for a retention pick because they did not play last season.
There are 98 players in total who have nominated themselves for the draft so far. Livingstone looks set to join Faf du Plessis, Kieron Pollard and Rashid among the Platinum picks, which are to be decided by the BBL.
There are likely to be a host of Pakistan players nominating themselves in the coming weeks although there is some doubt about the availability of some of them due to international commitments. Pakistan host a Test series against England in early December and then two Tests and three ODIs against New Zealand, which are likely to run into the third week in January and will also be part of the World Cup Super League. The PSL is set for February meaning it would be virtually impossible for Pakistan’s multi-format players to come to the BBL, although those not involved in the Test matches could be available for the first half of the tournament.