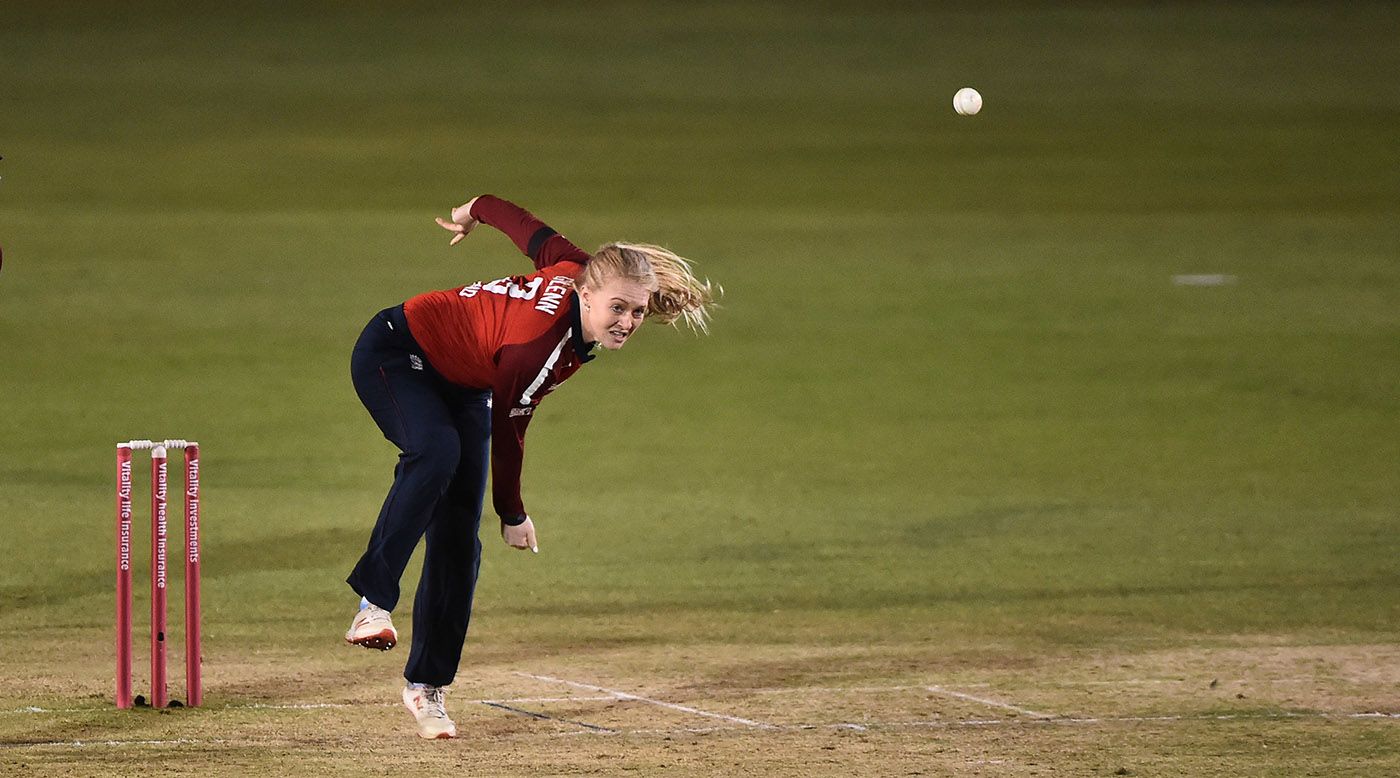 As hard as it was “fan-girling” from home as England reached the World Cup final, legspinner Sarah Glenn believes she is set to reap the rewards of her difficult decision to opt out of the tournament.
Evidence was there already as she played her first match for England since the Ashes in January, bowling South Africa opener Anneke Bosch as the hosts sealed a six-wicket victory with five overs to spare in their first of three T20Is at Chelmsford on Monday.
Glenn finished with figures of 1 for 18 from three overs, while left-arm spinner Sophie Ecclestone took two behind veteran seamer Katherine Brunt’s T20I career-best 4 for 15 which contained South Africa to a paltry 111 for 9.
“I was very nervous actually,” Glenn said of the moments before captain Heather Knight threw her the ball in the seventh over. She struck with her seventh ball. “When I saw Heather, she was like, ‘okay, next over’ and it was like okay, deep breath. Once I got through my first over I was fine and I just really soaked up the atmosphere.”
Related
Glenn went wicketless and conceded 39 runs from three overs in the only T20I completed during the rain-affected Ashes which Australia won by nine wickets. She opted out of going to New Zealand for the ODI World Cup, where she would have been a travelling reserve rather than part of the squad proper, as the toll of bubble life and other Covid-prevention rules the squad were forced to follow amid a surge in cases in the UK around Christmas time mounted.
“I think it was what I needed,” Glenn said. “It was a really tough decision and it was quite hard seeing the girls but I was just fan-girling from home. It just made me really clear and I did a lot of training sessions by myself, just figuring out things with a clear head and that just helped so much. It has made me have so much more clarity coming into this summer.
“There were a few things I wanted to make changes with in my bowling. I did a few drills and I found with a shorter run-up, I felt a bit more stable and more rhythmic so that has allowed me to work on my variations like googly, yorker, pace-off, things like that. With all of that, I practised it in pre-season so I knew I had it in the locker and I could just keep it simple for the summer.”
Sarah Glenn in her delivery stride•Getty Images
Glenn took six wickets in four matches at the T20 World Cup in early 2020 at 11.33 with an economy rate of 4.25 and including a career-best 3 for 15 in England’s group-stage victory over Pakistan.
She impressed against West Indies in September of that year and toured New Zealand in early 2021 before home series against India and New Zealand last year, and is still the No. 2 bowler in the ICC’s T20I rankings behind Ecclestone.
“I forget that sometimes,” Glenn said. “Soph is much more experienced, so I always follow her steps. I am always asking her questions, being a little bit of a coaches’ pet, but she has helped me a lot and guided me in my international career so hopefully she can keep teaching me over the years.
“Obviously the dream is to be number one but when I got to number two I wasn’t even thinking about it and that is when the danger is, when you keep thinking about it. So we just try to keep it simple, try to perform our best every game and if we’re number one or two, it is a bonus.”
The pair could form a formidable combination at the Commonwealth Games, starting in Birmingham next week, where England will open their campaign against Sri Lanka on July 30.
The England T20 squad are hugely enthusiastic about being part of a multi-sport showcase for the first time, and on home soil. The event appeal massively to Glenn as a former junior hockey international who grew up watching her hockey idols at events like the Commonwealth and Olympic Games.
“It is honestly amazing,” she said. “When we went to the kit-out day, how everything was brought back all the memories and made me a bit emotional, actually, because it is so good to feel you are just one team from multiple teams. It brought back really good memories for me so I am excited to have that kind of experience again.”
Tags: Commonwealth Games Women's Cricket Competition, England Women, SA Women vs ENG Women, Sarah Glenn, South Africa Women in England