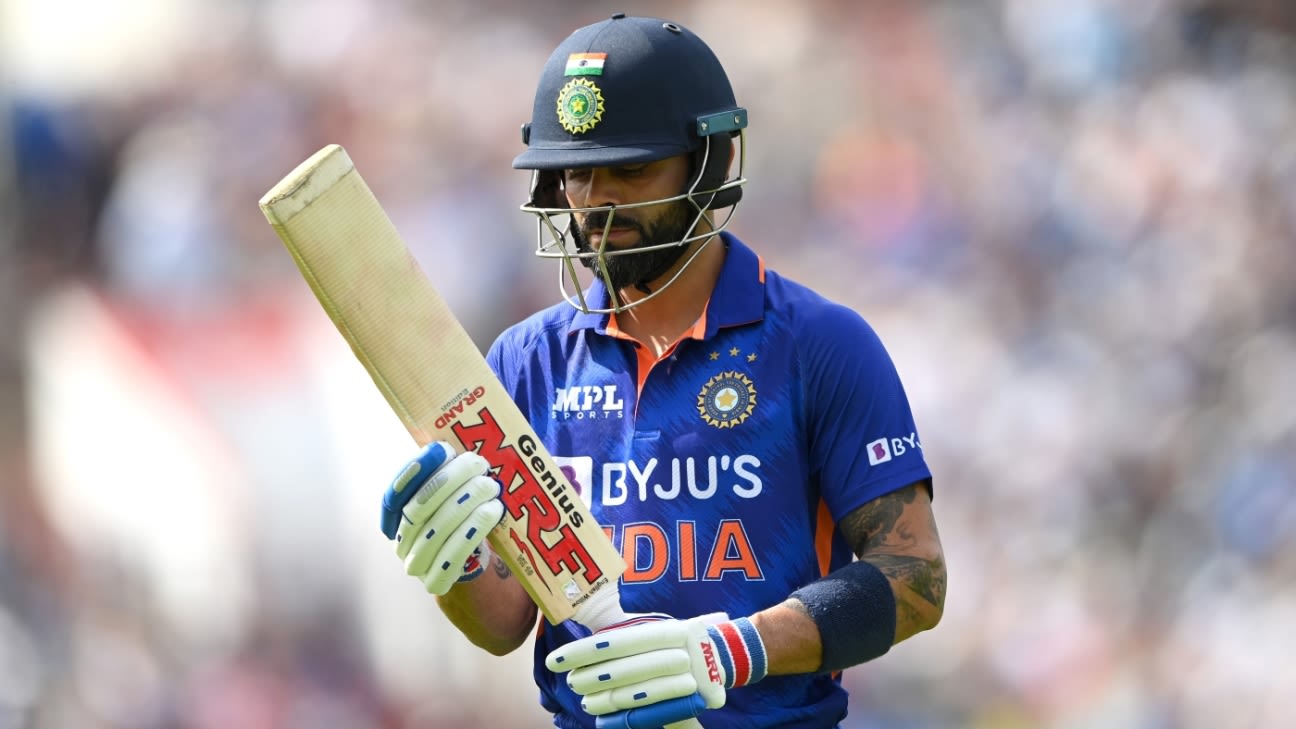 Rohit Sharma isn’t too worried yet, but does think the form of India’s top-order batters is “something we need to look into”.
Shikhar Dhawan finished with scores of 1, 9 and 31* in the three ODIs in England, while Virat Kohli aggregated just 46 runs in those games, along with the 11 and 1 he made in two T20Is. Rohit himself made scores of 0 and 17 after opening the ODI series with an unbeaten 76 in a ten-wicket win.
Related
“Not really,” he said if it was a concern. “But we do understand that it is something we need to look into. To be honest, the wicket [at Old Trafford] didn’t have much. We played some not-so-good shots and that’s what cost us wickets. But I still back those guys to come out good because they have done it for a long time. I’ve got nothing more to say since I understand the quality they bring to the team.”
Despite the lack of runs at the top, India won the series 2-1.
After the canter in the first ODI, India were 29 for 3 in pursuit of 247 in the second. In the series decider, they slipped to 38 for 3 by the ninth over in their chase of 260. While Dhawan was out driving to point on Sunday, Rohit nicked to slip and Kohli was caught behind, in near-identical fashion to his dismissal in the second ODI at Lord’s.
On Sunday, a 133-run stand for the fifth wicket, at better than a run-a-ball, between Hardik Pandya and Rishabh Pant helped India overcome that stutter to win by five wickets. While Hardik made 71, Pant was unbeaten on 125 – his maiden ODI century – when the winning runs were hit.

“Obviously, moving forward there are a lot of things we need to improve as a group, but quite pleased with the effort from the boys in the entire white-ball leg”
Rohit Sharma

“[We were] quite pleased chasing 260 – it was a good pitch, but we knew it won’t be easy if we lost wickets early,” Rohit said. “We didn’t want it to happen, but if you look at the positive side, a lot of these guys haven’t batted a long period in the middle overs, and we got to see that from Rishabh and Hardik. Both of them were clinical with the bat – at no point did we feel they were panicking. They backed themselves, played great cricketing shots, which was good to see.”
It meant a second straight series win for Rohit as full-time ODI captain since being elevated to the role last November.
“Very pleased,” Rohit said of the series outcome. “We came here wanting to achieve something as a group in white-ball cricket, and I thought we achieved a fair bit. Obviously, moving forward there are a lot of things we need to improve as a group, but quite pleased with the effort from the boys in the entire white-ball leg.
“We were here last time, and we were beaten, I remember that. It is not an easy place to come and win games, but the way we played the entire white-ball leg was fantastic. It’s something we wanted to do for a long period of time, to finally come and achieve was a great effort from the entire unit.”
Yuzvendra Chahal had an excellent tour, picking up seven wickets in the ODIs at an economy rate of 5.35•Getty Images
Rohit was effusive in his praise for Hardik, who returned as an allrounder to the ODI set-up after more than a year. He finished with six wickets in three matches, including a career-best of 4 for 24 at Old Trafford on Sunday, to go with his contributions with the bat: 29 in 44 balls and 71 in 55 balls.
There were also good words for Yuzvendra Chahal, who underlined his significance to India’s white-ball plans again, after being left out of last year’s T20 World Cup. He finished the ODI series with seven wickets in three games, at an economy rate of just 5.35.
“He is a critical member for us,” Rohit said. “He has got so much experience, bowling in all sorts of white-ball formats. It was very unfortunate that he missed the last T20 World Cup, but I’m pleased with how he has come back after the World Cup and gone from strength to strength.
“Hardik as well, he used the dimensions of the ground pretty well. One side of the boundary was pretty long, he kept bowling those bouncers and got the rewards for it as well. I’m very pleased for him.”
Tags: England vs India, India, India in England, Rohit Sharma