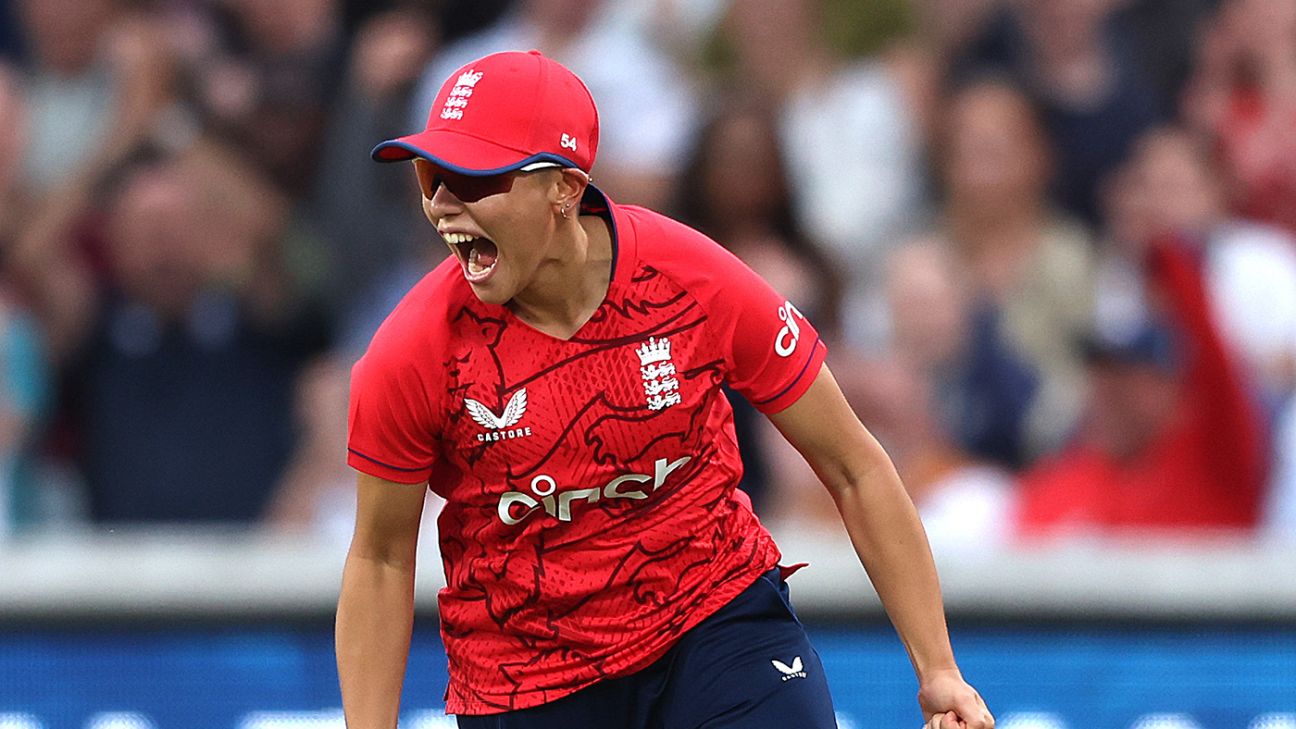 England 176 for 6 (Ecclestone 33*, Wyatt 30, Mlaba 3-22) beat South Africa 138 for 6 (Brits 59, Kemp 2-18, Ecclestone 2-24) by 38 runs
A half-century to Tazmin Brits was no match for a stellar effort with bat and ball from Sophie Ecclestone and another successful youth policy roll-out as England won the final T20I of South Africa’s tour by 38 runs in Derby.
England handed an international debut to 17-year-old left-arm seamer Freya Kemp, and she took her maiden wicket when she had South Africa opener Anneke Bosch stumped by Amy Jones for 17. She followed that with the wicket of Brits, caught by Ecclestone for 59 as South Africa fell short in their attempt to overhaul a lofty target of 177.
Ecclestone, an old hand for England at the age of just 23, then took two wickets, that of the dangerous Laura Wolvaardt, and then Chloe Tryon with the last ball of the match. But it was her 12-ball 33 not out that pushed England to 176 for 6 after an exciting 25 off just 17, including four fours in a row by Alice Capsey, another 17-year-old playing just her second international match. The victory allowed England to finish off the multi-format series 14-2, South Africa’s only points coming from the drawn Test in June.
Cap that!
Allrounder Capsey didn’t have a chance to bat on her international debut as England cruised to a six-wicket victory in the second T20I in Worcester, although she did take a wicket with her second ball when she had Lara Goodall caught by Nat Sciver to break a century opening stand.
That changed on this occasion, however, following the early loss of Sophia Dunkley, who cut left-arm spinner Nonkululeko Mlaba straight to Wolvaardt at point on the first ball of the match. That brought Capsey to the crease in the No. 3 spot vacated by Bryony Smith when Kemp and right-arm quick Issy Wong came into the side, with Freya Davies also making way.
Capsey struck the fifth ball she faced – from Masabata Klaas – through long-on for four and she unfurled three more in succession, clearing backward point, piercing the covers and lifting one over backward square. Capsey then turned Ayabonga Khaka to the rope through fine leg to move to 21 off 10 balls and after three overs England were 34 for 1. Mlaba returned to the attack with immediate effect, however, removing Capsey with her seventh delivery, caught by Tryon at mid-off.
Alice Capsey produced a sparky maiden innings at No.3•Getty Images
Mlaba makes things happen
Mlaba, in the side after frontline quick Shabnim Ismail succumbed to a back problem, could have had another but Sciver, on four at the time, overturned her lbw dismissal with replays showing the ball sliding narrowly down the leg side. At the end of the powerplay, England were 53 for 2 and Danni Wyatt bumped that up with a six down the ground off Delmi Tucker, which Anneke Bosch did well to almost reach running round from long-on but failed to get a hand on as it dropped over the rope.
But when Mlaba returned in the 11th over, there was no mistaking her dismissal of Sciver, bowled by one that deceived her through the air and clattered into the base of the stumps. When Tryon bowled Wyatt for 30 with another full delivery next ball, England were 86 for 4 and South Africa were regaining a measure of control.
Ecclestone cuts loose
England steadied through Amy Jones’ 28 off 18 balls but after she holed out to Brits at deep square leg off Klaas in the 18th over, Ecclestone picked a four off Khaka through wide long-on in the next as a precursor to what was to come.
Ecclestone proceeded to smash 26 off the final over of the innings, bowled by Klaas, beginning with back-to-back fours before sending the fourth ball over the rope at deep midwicket. She then punched the next ball through the covers for four before sending the last ball a long way over the fence beyond the rope at deep backward square.
Nonkululenko Mlaba struck twice in her first seven balls•Getty Images
Commonwealth Games ahoy
With women’s cricket set to make a Commonwealth Games debut later this week, both sides will have been looking for takeaways to Birmingham. For England in this series it’s no doubt been getting an encouraging look at their newcomers. Then there was Katherine Brunt, taking a career-best 4 for 15 at the age of 37 in the opening match at Chelmsford to prove she’s well and truly up for the tournament and Ecclestone showing off her ever-present class.
England’s experimentation in the batting order has paid off, particularly in the absence of captain Heather Knight, missing with a hip injury for the last two games. Their depth was impressive too on Monday night, not least from Ecclestone at the death.
For South Africa it has been a different story after struggling to get going since the Test, then losing Lizelle Lee to a shock retirement, then Kapp and most recently Ismail, who went wicketless in the first two games. Tryon, standing in for unwell captain Sune Luus, successfully mixed up her bowling to have England in trouble early.
Brits – who only joined the squad with Kapp’s departure and earned a call-up to the team when Luus fell ill – was excellent in scoring at better than a run-a-ball. But South Africa still look to be a long way short of where their semi-final appearance at the ODI World Cup suggested they might be by now.
Tags: Alice Capsey, ENG Women vs SA Women, England, England Women, Freya Kemp, Nonkululeko Mlaba, Sophia Dunkley, Sophie Ecclestone, South Africa, South Africa Women, South Africa Women in England, Tazmin Brits