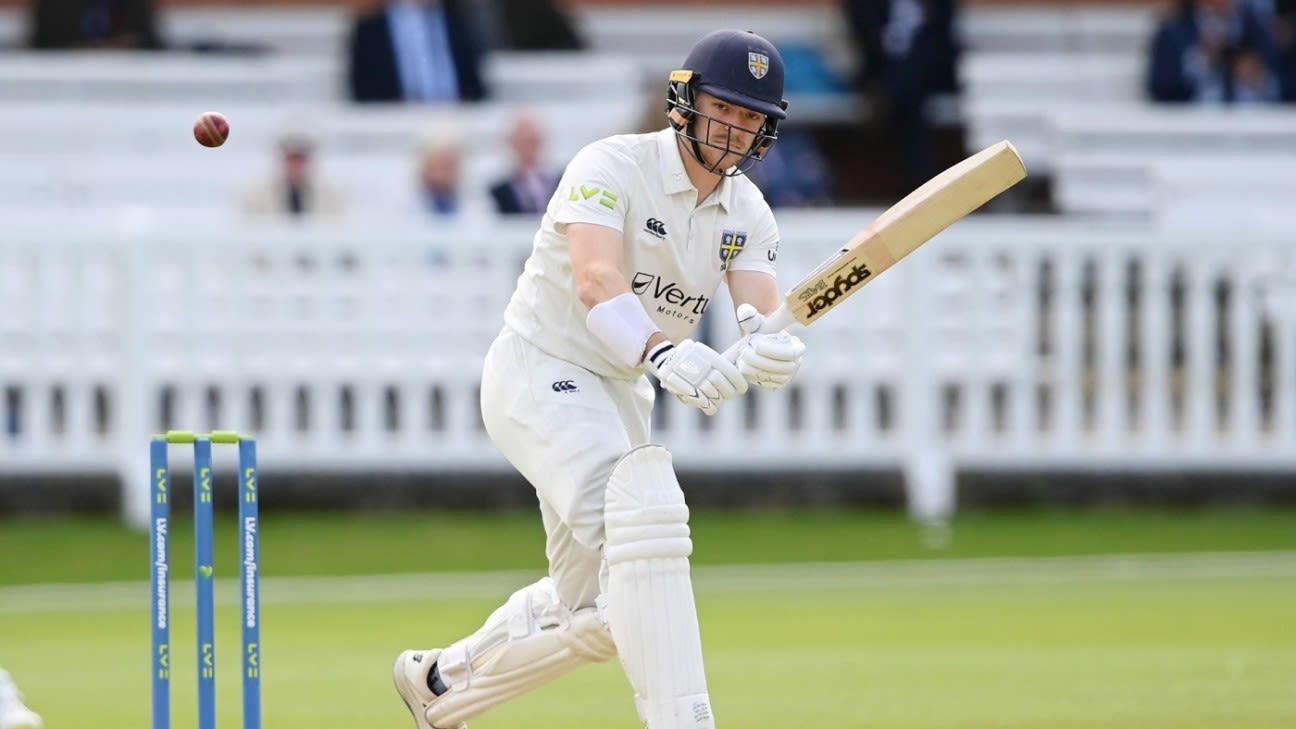 Durham 296 (Mackintosh 51, Pettman 3-40, Thomson 3-48) and 221 for 7 (Lees 41, Mackintos 28, Trevaskis 19*) drew with Derbyshire 283 (du Plooy 122, Dal 90, Rushworth 7-44) and 398 for 8 dec (du Plooy 134, Guest 116, Cartwright 71*)
Durham battled their way to a nervy draw against Derbyshire at Seat Unique Riverside in a result that failed to improve either side’s hopes of propelling themselves into the LV= Insurance County Championship Division Two promotion battle.
After declaring on 398 for 8, a lead of 385, Derbyshire made a strong push to secure their third win of the season, reducing the home side to 150 for 6 after the tea break courtesy of two wickets apiece from Anuj Dal and Sam Conners.
Debutant Tom Mackintosh and Liam Trevaskis put forward a resilient stand to halt the visitors’ victory charge. Trevaskis saw his side over the line alongside another fledgling, Stanley McAlindon, to secure a draw for the hosts. Both teams took 13 points from the match, leaving Derbyshire in fifth and Durham sixth in the Division Two table.
Entering day four in a commanding position, Derbyshire put their foot on the accelerator in the first hour to push towards the 400-run mark and a lead of 385. Hilton Cartwright led the way with 11 boundaries in his innings of 71 from 83 balls, recording a maiden first-class half-century for Derbyshire in the process.
The visitors ran into a wall in their initial burst at Durham before lunch in the form of Alex Lees. The left-hander used the aggression developed for England under Brendon McCullum and Ben Stokes to lead the hosts to 64 without loss, blunting the effect of the new ball, which had been vital in the previous three innings of the match.
However, the interval knocked Durham out of their rhythm, and Dal’s medium pace proved to be the undoing of Lees with a delivery that kept low removing his off-stump for 41. Dal then removed Michael Jones for 23 before Scott Borthwick got a grubber from Conners to hand Derbyshire a glimmer of hope of forcing a victory on a flat deck in the final two sessions.
Those hopes appeared to fade when Nic Maddinson and David Bedingham looked comfortable at the crease, establishing a partnership worth 41 to put the contest on course for a stalemate. However, the home side opened the door for Derbyshire minutes before the tea break.
Maddinson played a needless sweep across the line to fall lbw to Alex Thomson for 30, while Bedingham was then run out by Conners attempting a quick-single with Trevaskis. Ben Raine continued the procession after tea playing a loose clip off his legs behind to Brook Guest as Conners continued his impressive day.
Durham required resilience from their lower order, and for the second time of the match it came from debutant Mackintosh. The 19-year-old was surrounded by Derbyshire fielders in front of the wicket, but he and Trevaskis rebuffed their attempt to force the victory, defying the visitors with a stand of 49 for the seventh wicket.
Toby Pettman prised out Mackintosh for a hard-fought 28 to leave the home side with tense final 9.3 overs to see out with Trevaskis and the tail. But, even the introduction of the new ball was not enough in the closing overs as Durham held out for the draw.
Tags: County Championship Division Two, Derbyshire, Derbyshire vs Durham, Durham, Hilton Cartwright, Liam Trevaskis, Tomas Mackintosh