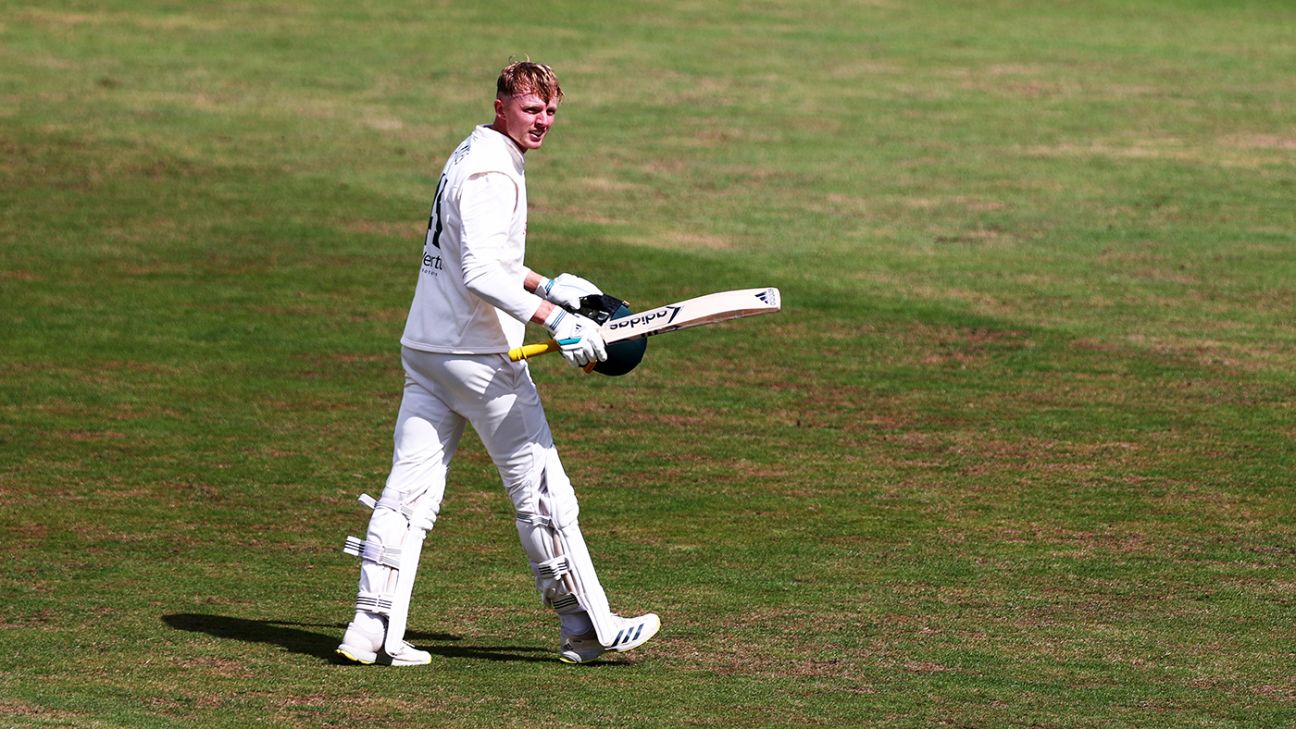 Middlesex 106 for 4 (Stoneman 67) trail Nottinghamshire 551 for 8 dec (James 155, Mullaney 79, Patterson-White 50, Hollman 4-122) by 445 runs
Division Two leaders Nottinghamshire tightened their grip against Middlesex in the LV= Insurance County Championship, posting their highest total at Trent Bridge for seven years after Lyndon James had turned his overnight 90 into a career-best 152.
The 23-year-old allrounder completed his first century on home soil and went well past his previous best of 108 before miscuing a ball from Middlesex’s young legspinner Luke Hollman to be caught at backward point as Nottinghamshire racked up 551 before declaring at eight down.
After a rocky start saw them slip to 37 for 3 inside ten overs, Mark Stoneman and Max Holden looked to have built a platform for a Middlesex fightback by adding 69 in 24 overs but Stoneman fell for 67 just before close to leave the visitors 106 for 4, still 445 runs behind.
Hollman finished with 4 for 122 as the most successful Middlesex bowler, although only Toby Roland-Jones was able to find any measure of control.
The pace of the cricket made up for the loss of the first session to rain as Nottinghamshire resumed on 378 for 4. The home side suffered a setback in the first over of the day as captain Steven Mullaney, having been struck in the groin by Tim Murtagh, recovered only to misjudge a ball angled in by Murtagh that bowled him with no stroke offered.
James, a tall, elegant right-hander who has come through the Nottinghamshire age groups, moved into three figures with a beautifully-executed off drive and new partner Tom Moores looked equally pleasing on the eye with four boundaries in a couple of overs as Nottinghamshire completed the full set of batting bonus points.
Moores came and went quickly in the event, wafting at one outside off stump to give Murtagh a second wicket in his opening spell, but Middlesex would have to wait 20 overs for another breakthrough during which James and Liam Patterson-White added 91 before the former – dropped at second slip on 78 on the first evening – went down the pitch to Hollman and paid the price for an uncontrolled stroke.
James, who had gone to 150 with a lovely paddle for four followed by a pull for six off Hollman, finished with 19 fours and a six, with Middlesex’s change seamers Toby Helm and Martin Andersson again leaking more boundaries than they would have liked.
Patterson-White and Pattinson added another 53 in eight overs, the Australian quick bowler twice clearing the rope off Hollman, the second of which took Nottinghamshire’s total top side of 550 for the first time on this ground since they scored 600 against Warwickshire in 2015.
A four crashed through the off side as he made room to swing at Helm had taken Patterson-White to his first half-century of the season but when he holed out to long-off in the next over, Mullaney decided he had enough.
With 36 overs left in the day, the simple objective for Middlesex was to reach the close with minimal losses but a hostile three-pronged Nottinghamshire pace attack had other ideas. Sam Robson was given out leg before as Pattinson thudded one into his front pad, Steven Eskinazi was bowled off an inside edge by Luke Fletcher and 22-year-old left-hander Jack Davies, in his second first-class outing of the season, was leg before to Dane Paterson without scoring.
Stoneman’s 78-ball half-century looked to have given Middlesex a platform to take into day three but he succumbed to the pressure of fielders round the bat three overs from the close, aiming a fulsome drive at a ball from left arm spinner Patterson-White that spun back to bowl him.
Tags: County Championship Division Two, Lyndon James, Middlesex, Nottinghamshire, Notts vs Middlesex