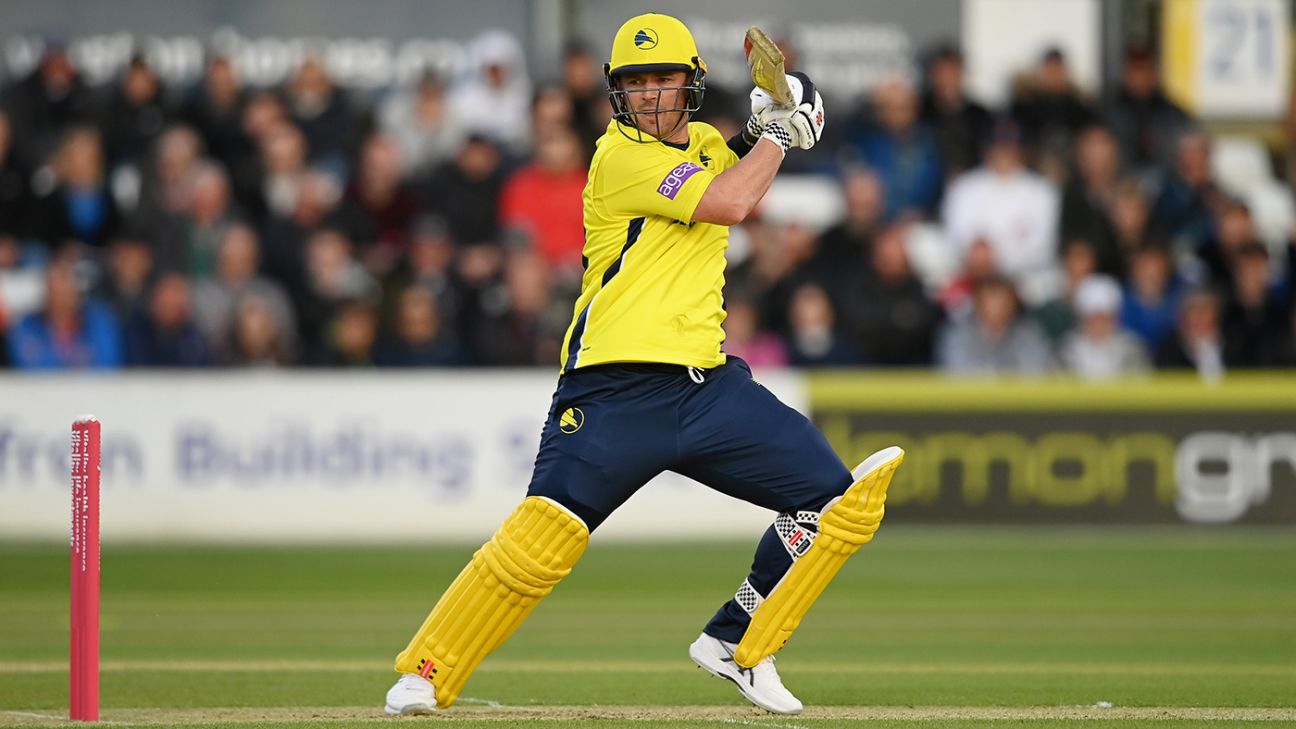 Hampshire 178 for 7 (McDermott 50) Gloucestershire 169 for 7 (Bracey 40, Fuller 2-23) by nine runs
That Gloucestershire might have actually stolen this match crept up on Hampshire when least expected. They dominated the bulk of the night but assumptions that a critical match was in the bag were thrown into doubt when they still found themselves defending 12 from three balls. At that point Chris Wood summoned an excellent yorker to Benny Howell, from which only a single accrued. Jack Taylor was bowled around his legs from the next ball and Hampshire finally quelled an unlikely rebellion.
With 19 needed from the last six balls, Wood had begun his final over with a gift on leg stump, but Taylor flicked it straight to Toby Albert at short fine. Wood then had another aberration and this time his leg-stump half-volley was deposited over square leg for six. Three hours of professional cricket nearly fell apart in a couple of balls.
Other than a nervewracking finish, pity the person charged with trying to put together a highlights reel from this match because it was a pretty uninspiring affair, but the outcome of the sweat and the labour of another hard-fought night in the Vitality Blast, was that Hampshire’s late charge to the quarter-finals continues, and most probably at Gloucestershire’s expense. They are playing intelligent, well-drilled cricket.
Hampshire now leapfrog Gloucestershire and knock them out of the top four. They must meet again at the Ageas Bowl in their penultimate match on July 1.
At 64 for 5 from 7.5 overs, Gloucestershire appeared to be dead in the water, except that James Bracey, a finisher at No. 6, and Taylor, an utterly unpredictable flayer, a place lower, both have the ability to oxygenate an innings. Bracey would do so by approved methods, the sort of guy who would not only have a First Aid certificate but remember the lessons. Taylor? Not so convinced. But when he did save a life it would probably be packed with so much action it would make a Hollywood movie.
Bracey fell for 40 in 26 balls, an ugly bottom-of-the-bat swing to mid-off, but the attack was then taken up by Howell, who finished with 34 not out from 18 balls in an inspired but unrewarded finale.
Sometimes the scoreboard does not quite convey the mood. Hampshire’s innings had felt like a perpetual struggle, an innings short of memorable hits with the boundary cleared on the full only three times. But if the mood was 160 at best, the outcome was 178 for 7 and two more points towards another last-eight place.
Ben McDermott’s third half-century of the season came on a much-needed night and two doughty professionals down the order, James Fuller and Liam Dawson, added some late vitality with 51 coming in the last 28 balls. No forgetting 17 extras: only a cricket tragic heads for home talking about extras, but it was a night when such things mattered. Hampshire conceded none – their discipline exemplified.
James Vince’s silky, run-strewn season has been at the heart of Hampshire’s recovery from a dreadful start. He had made two hundreds in the past three matches, against Somerset and Kent, but this was a grey and grouchy, pint of mild. Bristol night, rather than a bottle of quality midsummer Chablis, and it was no surprise when Vince offered a static cut at a wide one and edged Mohammad Amir to the wicketkeeper.
McDermott, stocky and potentially destructive, was comparatively guarded, and he had a life, on 37, when he thrust his head back in disappointment as he failed to make clean contact with a pull against Taylor only to find that he had mistimed it so badly that Glenn Phillips could not quite make ground from deep square leg.
David Payne, who can now proudly call himself “England’s David Payne”, even if nobody else quite remembers a debut in an ODI against Netherlands in Amstelveen, conceded 10 from two muscular pulls. McDermott then quickened his pace against Taylor’s spin but when he moved across his stumps and defied Payne to lock on to his leg stump, Payne did just that with pinpoint accuracy. England bowler, fella. Don’t come that one with me.
Gloucestershire’s top-order misfired. Fuller, a former Gloucestershire player, is having an influential season and he had Ian Cockbain caught off a leading edge for 19 and then bowled Chris Dent through the gate for 24 in an impressive 2 for 23.
As spin bowlers have had so few mentions this season, it should also be remarked that two slow left-armers – Tom Smith, to bowl Joe Weatherley, and Dawson, to strike Higgins’ off stump in similar fashion – both produced classically turning deliveries. The only difference was that Dawson followed up his by rushing towards the crowd with his finger to his lips to tell them to shut up – all to do with an earlier boundary save. In football, such gestures are almost de rigueur, but in cricket it is not remotely etiquette at all and the umpires will be nervously fingering their report sheets and wondering whether to ignore it.
Tags: Ben McDermott, Gloucestershire, Hampshire, Hampshire vs Gloucs, James Fuller, Vitality Blast