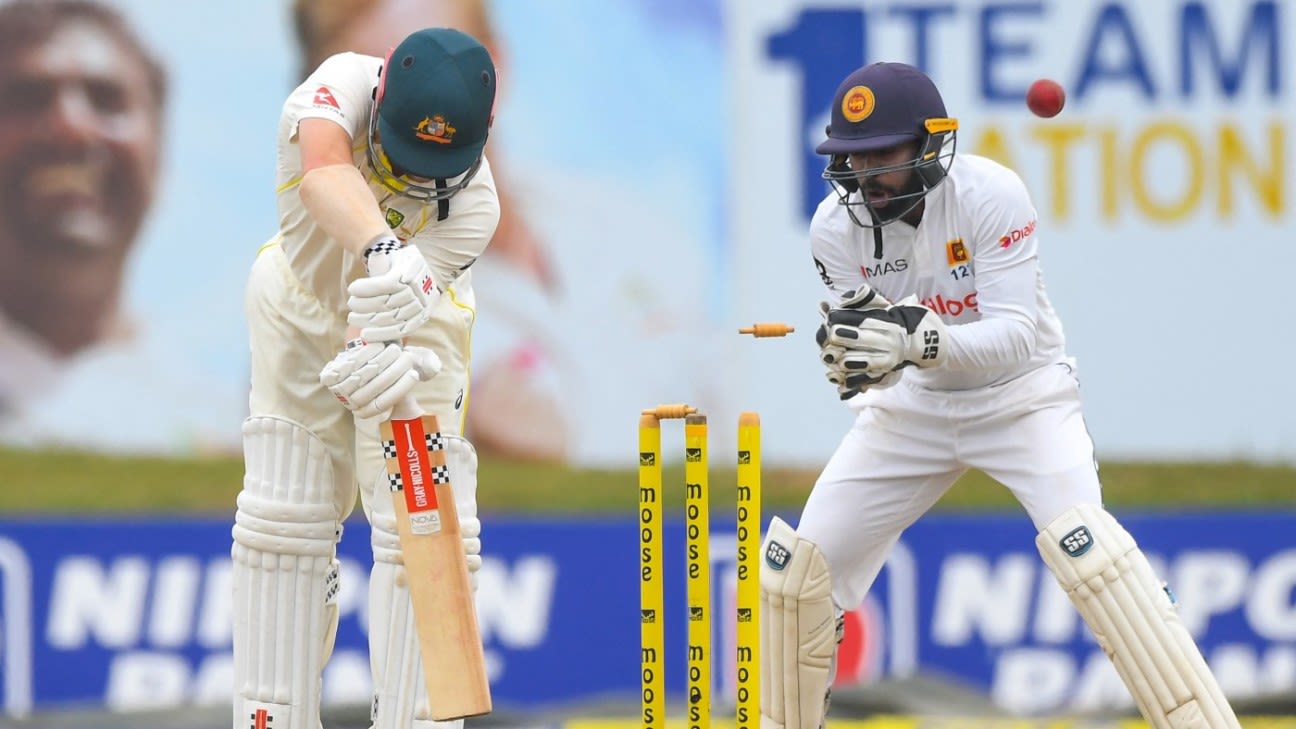 Head coachAndrew McDonald insists Travis Head’s game has improved in Asia as Australia look to adopt a horses-for-courses approach on future tours of the subcontinent.
Australia’s capitulation to an innings loss in Galle on Monday marked a poor end to two tours on the road, where they won 1-0 in Pakistan and drew 1-1 in Sri Lanka.
McDonald is adamant the Galle reality check should not overshadow the fact they have taken significant steps forward on the sub-continent. But there is little doubt questions still remain ahead of next year’s tour of India.
Australia were unable to make use of a platform of 329 for 5 in the first innings of the second Test, then spent 181 overs in the field and collapsed inside 41 in their second innings.
Related
Several of those lessons will now be parked to one side and be brought out again ahead of next February’s four-Test tour of India. Australia have home series against the West Indies and South Africa, but form from Pakistan and Sri Lanka will weigh heavier when it comes to selection for India.
“For a home summer it would be pretty difficult to join the dots from that surface out there [in Asia] to what we will see in Australia,” McDonald said. “[It] goes without saying [we pick a different team for the different conditions]. We picked two spinners here but we don’t pick two spinners in Australia.
“It’s about the balance of your side. How many left-handers, how many right-handers. There are always things that are factored in. We have got to go away and make sure that we are asking ourselves the right questions as a selection panel and a coaching group.”
McDonald’s input followed captain Pat Cummins suggestion players had to be given a chance to show what they can do in Asia.
Head looms as the man under the most pressure. Across five Tests in Asia, Usman Khawaja enhanced his reputation as an improved man. Steve
Smith and Marnus Labuschagne both scored centuries in Galle and Cameron Green impressed throughout.
Alex Carey had a poor second Test in Sri Lanka with the gloves, but still averaged 53.60 across the two tours. Mitchell Swepson also showed improvement with the ball in the second Test, while Nathan Lyon took two five-wicket hauls across the tours.
David Warner meanwhile averaged below 30 as his century drought continued, but McDonald is adamant there is still many runs left in the opener. Head’s position is of most concern though, after Glenn Maxwell went close to selection in both Tests in Galle and Cummins made clear he was in the conversation for India.
After being player of the series in the home Ashes summer, Head scored just 91 runs at an average of 15.16 against Pakistan and Sri Lanka.
“He’s here for the first time,” McDonald said. “He’s been exposed to conditions that are very foreign. We saw him add the sweep shot in during [the final] innings.
“He’s been working incredibly hard on his game. Sometimes, you make one small error and you are not there to actually see if your method works or not.
“There’s definitely been a shift in his game in terms of how he wants to play in these conditions. So we are optimistic that across the journey, if given more time, that that can no doubt work.”
Tags: Andrew McDonald, Australia, Australia in Sri Lanka, ICC World Test Championship, Travis Head