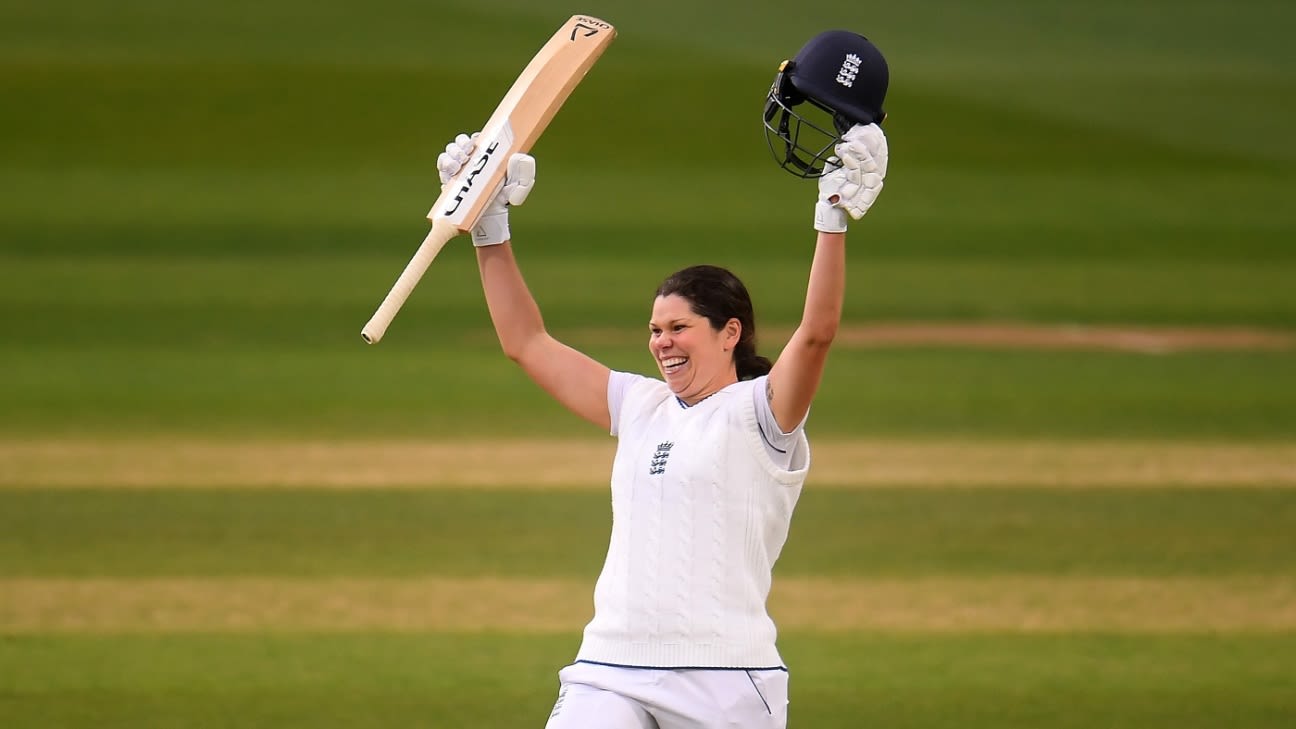 “Bloody brilliant” is how it feels to score a century on your Test debut, in case you were wondering. Just ask Alice Davidson-Richards.
One of four players in the England XI making her Test debut, Davidson-Richards, a 28-year-old allrounder, scored 107 and shared a 207-run stand for the sixth wicket with Nat Sciver, which was poignant for many reasons.
Sciver, nearly two years her senior, captained Davidson-Richards in their school cricket team at Epsom College, where they also played hockey and netball together before they joined the England set-up and shared car journeys to training.
“It means quite a lot having Nat there,” Davidson-Richards said as the pair faced the media after rescuing their side from 121 for 5 and securing a 44-run lead on the second day of the Test with South Africa in Taunton, Sciver still unbeaten on 119 at the close.
“When we started driving up to Loughborough together however many years ago, to being out there playing a Test match together is really, really special.”
But then their international careers diverged. Davidson-Richards played one ODI and five T20Is, all in 2018, and that was that until her recall for this match. Sciver, meanwhile, is playing her eighth Test and has 180 white-ball internationals to her name, including a pivotal role in England’s World Cup campaign earlier this year when they finished runners-up.
Asked whether she thought her international career had been over, Davidson-Richards said: “I don’t think completely.”
“I’ve always had like a deep-rooted faith in how good I could be and it was just knowing how to get there,” she added. “And everything that’s happened before has allowed me to get to here so I’m absolutely fine with everything that’s happened before, to be the player that I am now and the person I am now.
Related
“It stopped being at the forefront of my mind and ended up being, if I can be the best player I can be for the South East Stars and doing it that way, then everything else on top of that is a plus.”
Davidson-Richards has also stuck around long enough to be part of England’s newly professionalised domestic structure. She is one of South East Stars’ six contracted players and plays for Northern Superchargers in the Hundred.
She has also made a mental shift that has proven invaluable.
“I’m a lot nicer to myself to be honest,” said Davidson-Richards, who took also took a wicket in South Africa’s innings. “I put a lot less on myself doing well all the time.
“It’s a more well-rounded approach: ‘How can I help the team?’ Rather than, ‘have I done well, or not done well?’ And I think that’s something that really brings out the best in me and that enjoyment side as well is a big factor for me.”
“Some of it’s just getting old, not that 28 is old, but I’ve been told that I’m old a few times,” she laughed as Sciver rolled her eyes in jest. “So I think it’s a little bit of that. I’ve definitely talked to some of the coaches back at home and not necessarily a sports psych but I just talk to friends, people, who have helped me on through.”
Davidson-Richards saw Sciver to her fifty while facing 45 balls for her first nine runs. But she ended up unleashing 17 fours on the way to her 107 which ended on what turned out to be the last ball of the day when she sent a Tumi Sekhukhune delivery to Lizelle Lee at backward point.
Sciver, meanwhile, rated her maiden Test century as “definitely up there” with her five ODI hundreds, including two unbeaten centuries against Australia at the World Cup in April, one of those in the final as England finished runners-up.
“For it to be in a Test match is really very special – a format we don’t get to play much of but one that I love so I’m really happy,” Sciver said.
It also sweetened her involvement in Heather Knight’s run out for just 8 on the first ball after lunch. Knight’s dive was in vain after Sciver worked Nadine de Klerk towards square leg and called for a single but then the slightest of hesitations mid-run from both of them found Knight short of her ground as Sekhukhune fired the ball to wicketkeeper Sinalo Jafta.
“I was feeling very guilty,” Sciver said. “It was a bit of hesitation from everyone. I did say, ‘yes’. But she has forgiven me, apparently,” she added with a smile. “If I didn’t get to a hundred, maybe she wouldn’t have forgiven me.”
Tags: Alice Davidson-Richards, England Women, Nat Sciver, SA Women vs ENG Women, South Africa Women, South Africa Women in England