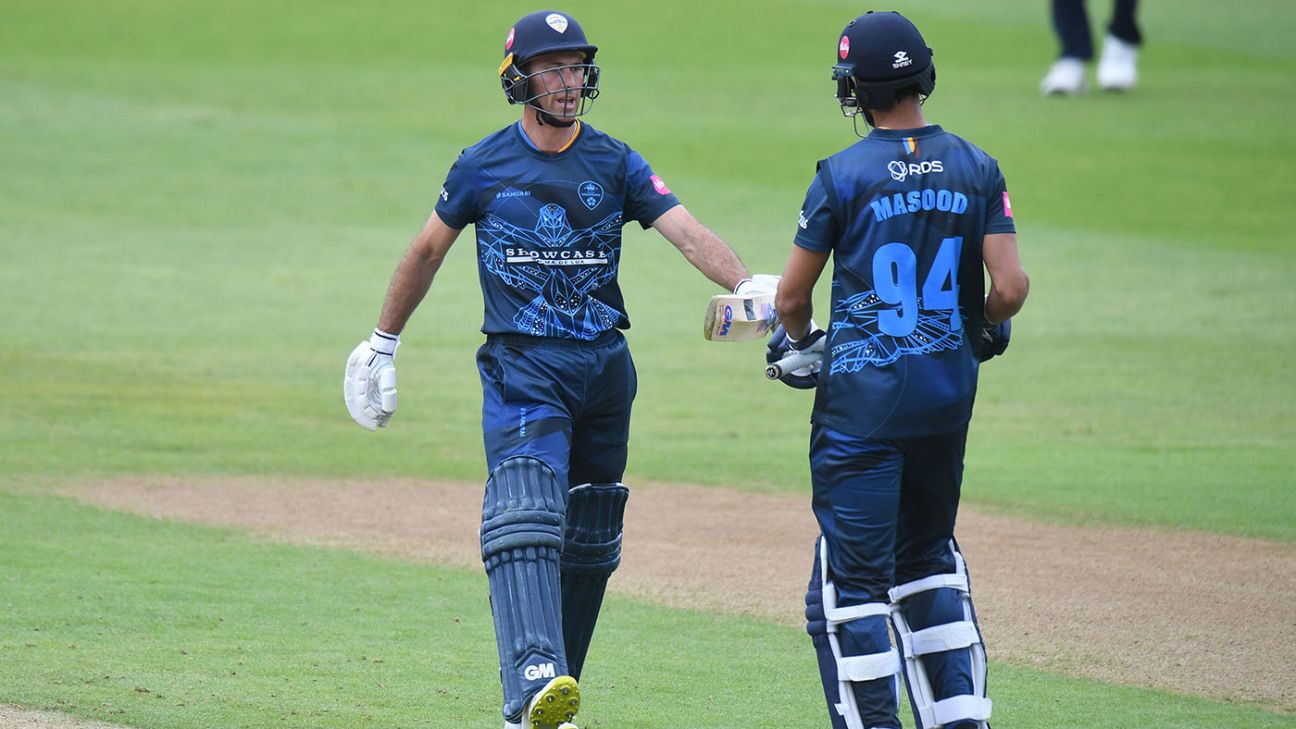 Derbyshire 192 for 4 (Madsen 73, Masood 57) Northamptonshire 186 for 7 (Zaib 92) by six wickets
Brilliant batting from Wayne Madsen and Shan Masood kept Derbyshire Falcons on course for the Vitality Blast quarter-finals with a six-wicket victory over Northamptonshire Steelbacks at Derby.
The pair smashed 95 from 50 balls to take the Falcons to a fifth straight victory for the first time in T20 cricket as they chased down a 187 target with six balls to spare.
Masood scored 57 from 43 balls and Madsen a destructive 73 with 10 fours and two sixes from only 37 balls as the Falcons cruised home on 192 for 4.
Saif Zaib scored a T20 career-best 92 from 58 balls to take the Steelbacks to 186 for 7 but it was not enough as the Falcons moved to within one point of North Group leaders Lancashire Lightning who they play on Friday.
Zaib revived the Steelbacks after two of their key batters fell in the first four overs of the powerplay.
Chris Lynn skied a swing at Sam Conners and Madsen held a steepling catch at cover before Hayden Kerr removed Josh Cobb.
The Steelbacks skipper drove and pulled Conners for four consecutive fours but then lost his off stump making room to cut Kerr.
That followed Ben Curran’s miscued clip at Mark Watts into the hands of mid on and at the end of six overs, the Steelbacks were 58 for 3.
Rob Keogh was caught off a George Scrimshaw no-ball but after hitting the free hit to the boundary, top edged a pull to third man.
Related
Jimmy Neesham drove Conners over long off for the first six of the innings in the 10th over and Zaib added a second when he cut Scrimshaw over wide third man in the 12th.
Zaib mixed improvisation with placement to reach 50 off 36 balls but the introduction of Matt McKiernanan in the 15th over removed the dangerous Neesham who was stumped charging the leg spinner.
The Steelbacks plundered 22 from the 17th over when Zaib swept and drove McKiernan for two sixes but Scrimshaw and Watt conceded only 10 off the next two.
Zaib pulled Kerr for his fourth six before he was run out but Lewis McManus drove the last ball for six to take his side to a competitive total.
The Falcons lost Luis Reece in the first over when he chipped a return catch to Cobb but Kerr pulled Tom Taylor for six and repeated the shot against Ben Sanderson as 16 came from the last over of the powerplay.
Kerr swung the first ball from Freddie Heidreich into the hands of deep midwicket but Masood took two boundaries from the wrist spinner’s next over to keep the Falcons on track.
Madsen drove and pulled Neesham for two fours to leave the Falcons needing 97 off the last 10 overs and he reverse swept Graeme White for six as 14 came from the 11th over.
The Steelbacks were struggling to contain the pair with Masood steering Sanderson to the third man boundary on his way to a 36 ball 50.
Cobb returned but Madsen ramped him for two fours as the Falcons accelerated towards their target with 46 coming from three overs.
A reverse-swept six took Madsen to a 24-ball 50 and although Masood holed out to long on, only 36 were needed off the last five overs.
Madsen was caught behind off Neesham in the 19th over but the game was over as a contest and Leus du Plooy finished in style with a big six over deep midwicket.
Tags: Derbyshire, Northamptonshire, Northants vs Derbyshire, Saif Zaib, Shan Masood, Vitality Blast, Wayne Madsen