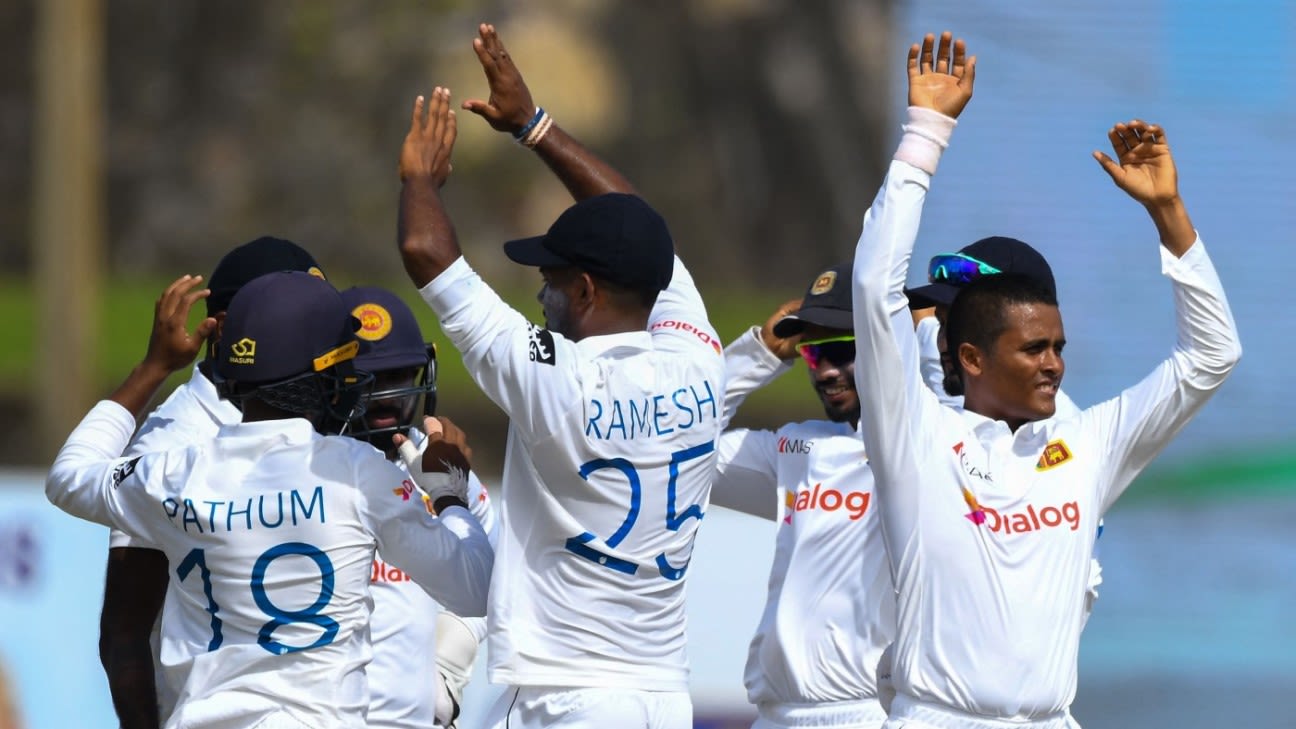 Sri Lanka have been hit by three more Covid-19 cases on the eve of the second Test against Australia, with Dhananjaya de Silva, Asitha Fernando and Jeffrey Vandersay ruled out of the game in Galle.
It is understood that the trio had all reported feeling unwell which led to the entire Sri Lanka squad being tested, with the positive results coming back on Wednesday.
It brings the number of Covid-19 cases in the Sri Lanka camp to five, following Angelo Mathews – who was the first and had to be subbed out on the third day of the first Test – and then left-arm spinner Praveen Jayawickrama, who will also miss the second Test. On Thursday afternoon, Sri Lanka captain Dimuth Karunaratne said the squad would have to pass another round of rapid antigen tests before confirming who would be available for selection.
“It’s really tough,” he said. “We were planning for the match from two days ago, and when you don’t have a proper XI, it’s not easy as a captain. We can’t help it right now. We’ve got to go through the medical protocol, and we have one more round of rapid antigen rests in the squad this afternoon, and hopefully no one tests positive from that.”
Related
Mathews, however, has completed his isolation period and is expected to play. Oshada Fernando, who was Mathews’ Covid sub, is one option for the middle order although allrounder Kamindu Mendis could get the nod in order to cover for Dhananjaya’s bowling.
With Lasith Embuldeniya having already been dropped, it means there will be substantial changes to the Sri Lanka side, and likely Test debuts for Maheesh Theekshana and 19-year-old Dunith Wellalage. Kasun Rajitha is the likely replacement for Asitha, who was the lone quick in Sri Lanka’s side for the first Test.
Offspinner Lakshitha Manasinghe and left-armer Prabath Jayasuriya had also previously been added to the squad, while it was confirmed on Thursday that left-arm wristspinner Lakshan Sandakan has also been called up.
Australia are staying in the same hotel as the Sri Lanka team, but are keeping their distance, and at this point, have had no positive tests on the tour.
Australian players are tested daily outside of matches, while rapid tests are only taken when players feel ill during a Test match.
AAP contributed to this report
Tags: Asitha Fernando, Australia in Sri Lanka, Dhananjaya de Silva, ICC World Test Championship, Jeffrey Vandersay, Sri Lanka, Sri Lanka vs Australia