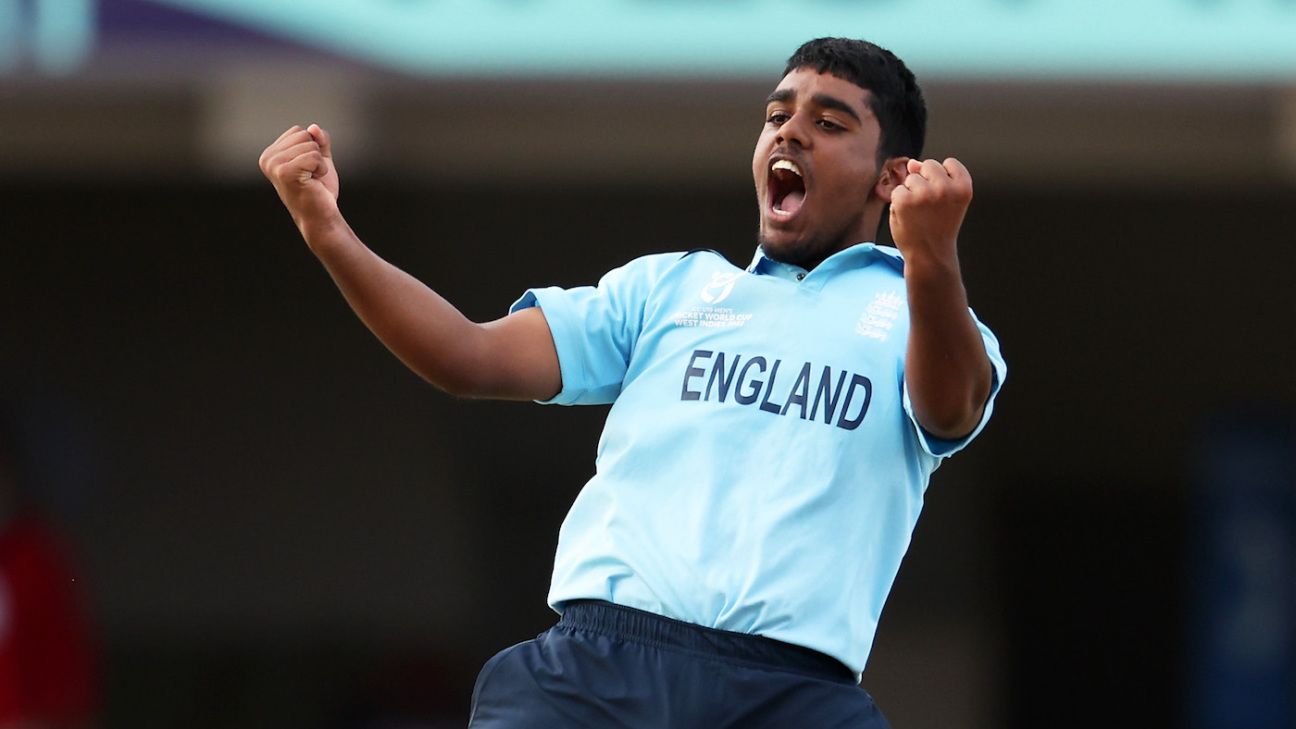 Rehan Ahmed, the 17-year-old legspinner, has won an England Lions call-up for two 50-over games against the touring South Africans next week after a breakthrough season for Leicestershire in the T20 Blast.
Ahmed starred for England at the Under-19 World Cup this year, taking 12 wickets in four games and showcasing his sharply-spun googly. He took 19 wickets in the group stages of the Blast, the most of any right-arm legspinner, and will be given an opportunity as one of two frontline spinners in the Lions squad.
Jake Lintott, Warwickshire’s left-arm wristspinner, is also included as England look to test their wristspin depth, with Matt Parkinson winning an opportunity in the main white-ball squads against India while Adil Rashid is in Saudi Arabia for the Hajj pilgrimage.
Related
Tom Abell, the Somerset captain, will lead a squad which features three players who have previously won full England caps in Tom Banton, Ben Duckett and David Payne. Will Smeed, the 20-year-old top-order batter, could make an overdue List A debut after a remarkable start to his T20 career.
Sam Hain will be given the chance to showcase his recent improvement at No. 3, after two full seasons without playing a 50-over game. He has the highest List A average of all time and has been a Lions regular but has made strides in T20 cricket of late, significantly improving his strike rate.
Benny Howell, the Gloucestershire change-up specialist, could play his first game for the Lions at the age of 33. Stephen Eskinazi and Adam Hose are the other batting options while Sam Cook and George Scrimshaw, Derbyshire’s beanpole seamer who has been a prolific wicket-taker in the Blast this season, round off the squad.
Benny Howell could play his first games for the Lions•Alex Davidson/Getty Images
The two fixtures against South Africa clash with England’s ODIs against India and a round of County Championship games. Mo Bobat, the ECB’s performance director, thanked the counties for their “collaborative approach… enabling us to field strong teams”.
“It’s always great when we can bring some of our best and highest potential players together, particularly to take on senior international opposition,” Bobat said. “The two games provide an excellent opportunity to continue to grow our depth and assess players’ readiness for England.
“The squad reflects a balance of England’s next best players and some future players of note, as well as high performers from this season’s Vitality Blast campaign.” Paul Collingwood, England’s assistant coach, will act as head coach.
The ECB said that the first fixture at Taunton on July 12 will “permit full squad participation” to help South Africa prepare for the ODI series, but the second game at New Road will be played as an 11-a-side List A game.
South Africa named a 17-man ODI squad last month, which will be captained by Keshav Maharaj in the injury-enforced absence of Temba Bavuma.
England Lions squad: Tom Abell (captain), Rehan Ahmed, Tom Banton (wk), Sam Cook, Ben Duckett, Stephen Eskinazi, Sam Hain, Adam Hose, Benny Howell, Jake Lintott, David Payne, George Scrimshaw, Will Smeed
Fixtures: July 12 – 1st 50-over match, Taunton; July 14 – 2nd 50-over match, New Road
Tags: Adam Hose, Ben Duckett, Benny Howell, David Payne, England, England Lions (England A), George Scrimshaw, Jake Lintott, Rehan Ahmed, Sam Cook, Sam Hain, South Africa in England, Stephen Eskinazi, Tom Abell, Tom Banton, Will Smeed