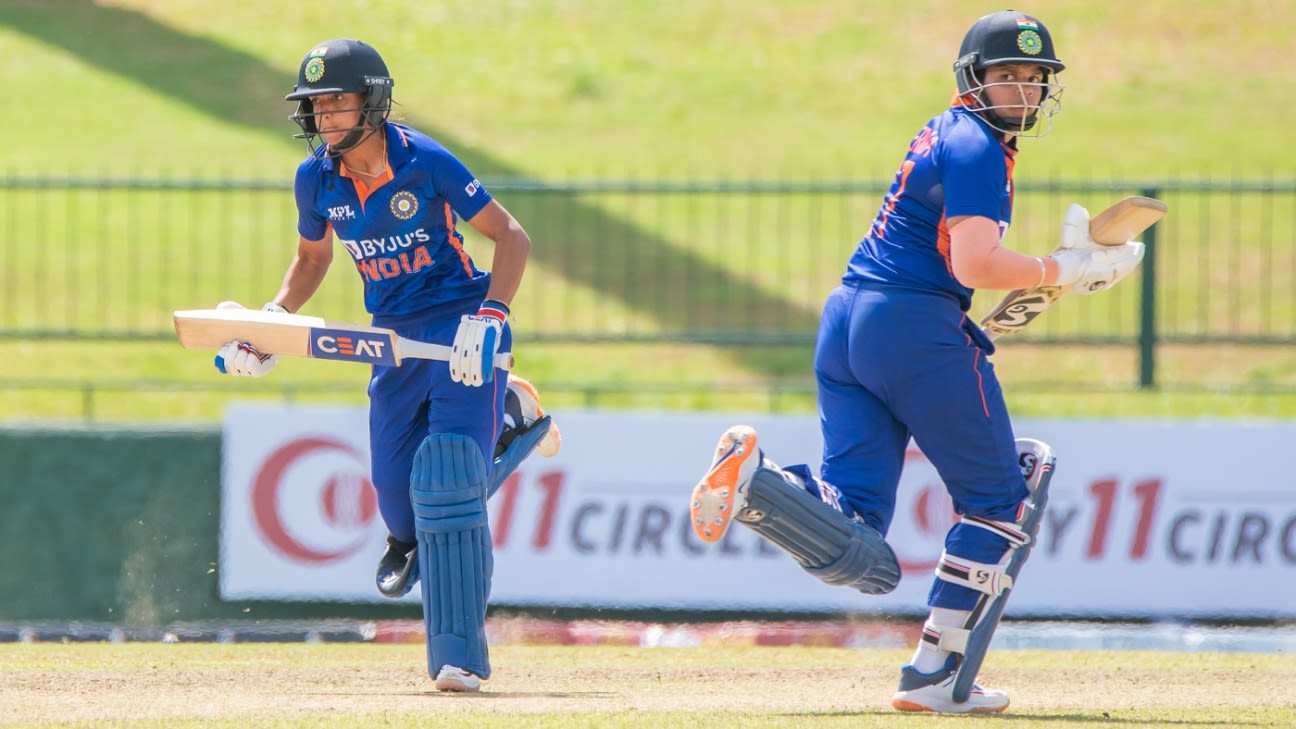 Shafali Verma is working consciously on improving strike rotation and not being over-reliant on hitting fours and sixes.
“I think in ODIs, we need to concentrate more on taking singles and I am working on that,” Shafali said on Wednesday ahead of the final ODI against Sri Lanka in Pallekele. “I watched some of my matches and found that I lack in [taking] singles. I felt that I should work more on rotating the strike and have done that. I did that in T20Is [against Sri Lanka] – taking singles of good balls. I was looking to play longer innings.”
Related
Shafali faced 71 balls in the second ODI against Sri Lanka, of which 37 yielded singles – a little over 50% of the balls faced. This year, in the 51 against New Zealand and 53 versus South Africa, the percentages of singles was 29.8 and 15.21 respectively.
Shafali credited the change to her maiden WBBL stint last year, where she batted in the middle order for Sydney Sixers after a poor start to the competition as an opener, playing alongside the likes of Ellyse Perry, Alyssa Healy, Ashleigh Gardner and Nicole Bolton. “I learnt a lot from batting in the middle order in WBBL,” she said. “I learnt that you can take singles, and single-doubles can then lead to a lot of boundaries.”
She scored an unbeaten 71 – her best in ODIs – and was involved in an unbroken 174-run stand with Smriti Mandhana, in the second ODI in Sri Lanka, helping India achieve a record chase.
Shafali and Mandhana have opened 14 times together in the format, stitching five fifty-run stands before the huge one the other day.

“I have been bowling in the nets for a long time. “In this domestic season, I got a chance to bowl and got a lot of confidence”
Shafali Verma

“She always supports me on and off the field,” Shafali said of her opening partner. “She tells me my mistakes and where we can improve as a pair. We enjoy talking to each other on the field and there’s good bonding and are looking to have more partnerships.”
Shafali’s role is not just restricted with the bat. Having bowled regularly in the domestic Senior Women’s T20 Trophy earlier in the year, she was handed the ball in the first T20I against Sri Lanka where she dismissed Ama Kanchana.
“I have been bowling in the nets for a long time,” she said. “In this domestic season, I got a chance to bowl and got a lot of confidence. During our match simulation [with the national side] I bowled well and Harry [Harmanpreet Kaur] di supported me and told me to work more on my bowling. So I have been practising single-wicket bowling in the nets.”
Although Shafali has not ruled out participating in the upcoming WBBL, where Harmanpreet will be seen playing for Melbourne Renegades again, she said that she would think over it given the long season ahead for India. After their assignment in Sri Lanka, India travel for the Birmingham Commonwealth Games followed by a bilateral series against England. Then there is the Women’s T20 World Cup in February 2023 in South Africa.
“Because it’s a long season – there are Commonwealth Games and [T20] World Cup – I haven’t thought much about the WBBL. We’ll see,” she said.
Tags: IND Women vs SL Women, India Women, India Women in Sri Lanka, Shafali Verma