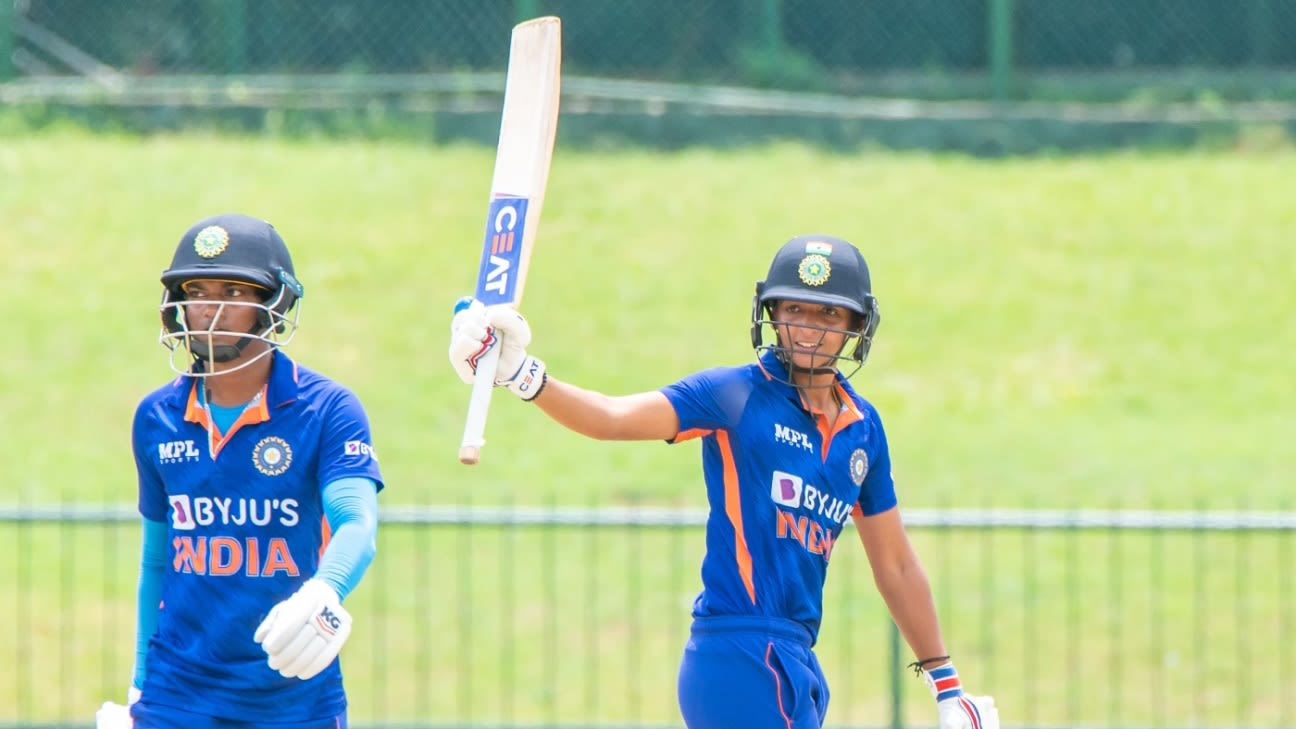 India Women 255 for 9 (Kaur 75, Vastrakar 56, Verma 49, Ranaweera 2-22, Athapaththu 2-45, Rashmi 2-53) beat Sri Lanka Women 216 (Nilakshi 48*, Athapaththu 44, Gayakwad 3-36, Meghna 2-32, Vastrakar 2-33)
Harmanpreet Kaur and Pooja Vastrakar’s all-round brilliance and Rajeshwari Gayakwad’s three-wicket haul helped India beat Sri Lanka by a comprehensive 39 runs in the third ODI to complete a 3-0 whitewash. After rescuing India with the bat with her 16th ODI fifty, Kaur removed a dangerous looking Chamari Athapaththu for 44 to land a colossal blow to the hosts’ chances. Vastrakar, too, put in a vital contribution, making her third ODI fifty after India were in trouble midway through their innings, and chipping in with a couple of wickets late in the chase.
Chasing 256, Sri Lanka lost Vishmi Gunaratne early but Athapaththu took the attack to India from the outset, dealing in boundaries for the most part. She was particularly severe on Deepti Sharma, whom she hammered for three consecutive fours in the 9th over. When Kaur brought herself on in the 11th over, Athapaththu greeted her with a powerful sweep to the square-leg fence. But just as she was looking to take the game away from India she miscued one to mid-on, who was bravely kept in the circle by Kaur.
The run-rate slipped considerably after the fall of Athapaththu, as Sri Lanka looked to rebuild. Hasini Perera and Kavisha Dilhari added 36 before Dilhari was drawn out of her crease to be stumped off Gayakwad just before the 100 was up. Soon after the 100 was up, Gayakwad struck again, as she bowled Hasini through the gate for 39. Then, there was another small partnership as Harshitha Samarawickrama and Nilakshi de Silva added 36 before Harleen Deol had Samarawickrama drag one on to her stumps on the sweep. That was the final blow of consequence; though Nilakshi held one end up while making her best ODI score, there was little the tail could do to challenge India’s total.
Rajeshwari Gayakwad picked up three wickets•Sri Lanka Cricket
Earlier, India recovered from 124 for 6 to post a competitive total as Kaur and Vastrakar added 97 for the seventh wicket. The spinners did the bulk of the damage for Sri Lanka with Inoka Ranaweera taking 2 for 22 in a miserly spell of bowling.
India started well with the openers adding 30 before Smriti Mandhana was caught behind trying to cut a ball that was too close and full for the stroke. Then there was a partnership of 59 between a dominant Shafali Verma and an assured Yastika Bhatia before Bhatia miscued one to mid-off while trying to clear the infield off Ranaweera.
Spin started to have more of a say in the middle as wickets suddenly tumbled. Playing just her second ODI, Rashmi Silva struck early as she trapped a set Verma in front for a well-made 49. She followed that up with the wicket of Deol who walked past a slider, for a stumping down the leg side.
Deepti Sharma and Richa Ghosh followed soon after to leave India tottering at 124 for 6. That brought Kaur and Vastrakar together and the duo set about reviving the innings. To help India’s cause, Sri Lanka dropped Vastrakar on the midwicket fence, and later, repreived Kaur when Anushka Sanjeewani missed a stumping down the leg side. Kaur went on to make 75 before she was caught in the covers in search of quick runs. Vastrakar reached her own fifty a while later and helped take India to 255, which proved to be a winning total.
Tags: Chamari Athapaththu, Harmanpreet Kaur, ICC Women's Championship, IND Women vs SL Women, India, India Women, India Women in Sri Lanka, Inoka Ranaweera, Nilakshi de Silva, Pooja Vastrakar, Rajeshwari Gayakwad, Shafali Verma, Sri Lanka, Sri Lanka Women