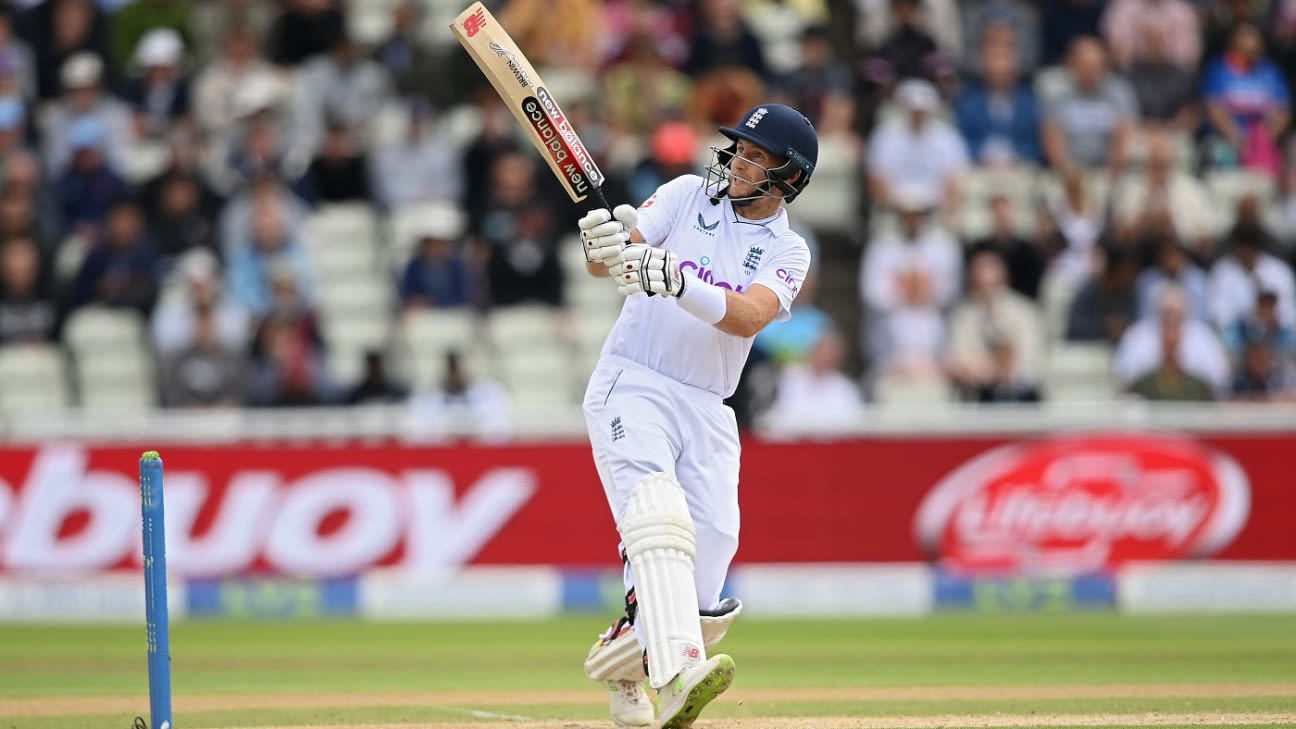 England’s remarkable performances against New Zealand and India have certainly been noted around the cricket world, so much so that “Bazball” made an appearance at Australia’s net session in Galle on Wednesday.
Steven Smith, who is among the Australians to have kept an eye on the matches in England, was heard shouting the term after playing a straight and later joked that Australia coach Andrew McDonald had already heard enough of it.
But there is certainly a fascination about England’s new approach where they have chased down four consecutive last-innings totals, capped off by their record 378 for 3 at Edgbaston and which has seen them score at 4.60 an over across the four matches.
Related
A familiar theme has been now long they can keep it going for, although that question was also posed during the New Zealand and India matches – which included bowlers of the caliber of Trent Boult, Tim Southee, Jasprit Bumrah and Mohammed Shami – and how it will adapt to different conditions.
“I’ve watched a little bit of it, it’s certainly been entertaining,” Smith said. “Even someone like Alex Lees started to come down the wicket when he was on nothing. It’s been exciting. I’m just intrigued to see how long it lasts, if it’s sustainable.
“If you come on a wicket that’s got some grass on it and Josh Hazlewood, [Pat] Cummins and [Mitchell] Starc are rolling in at you, is it going to be the same? We’ll see what happens. I’m intrigued by it all, we’ll see what happens.”
Joe Root plays a reverse scoop•Getty Images
Smith also noted how Australia have pushed the scoring rate in some recent matches, citing the Hobart Ashes Test where they scored at four-an-over in the first innings, and the first Test in Galle where they went at 4.53, although England’s run chases over the last few weeks have taken things to a new level.
“The pink-ball game in Hobart, when Heady and Marnus started to take the game on, the wicket was doing plenty so it was [to] counteract, put some pressure back on the bowler mentality, and it worked on that occasion,” he said. “Is it going to work every time? I don’t know.”
England’s next opponents, South Africa, are also talking a good game ahead of the Test series in August where they will be able to select a pace attack including Kagiso Rabada, Anrich Nortje, Lungi Ngidi, Duanne Olivier and the towering Marco Jansen
“I think the big challenge in playing that way is that you are not going to be consistent,” Rassie van der Dussen told IOL. “If we come out with a good bowling performance or it doesn’t go well for them, there will be a few question marks if they get bowled out cheaply in a first innings, or guys get caught hitting the ball straight up or playing loosely.
“Those are the challenges for them, we have the plans, we know what has worked for us. They are coming with a slightly different mindset and strategy, which has gone well for them. Let’s see them do that against our bowlers.”
Tags: Australia, Australia in Sri Lanka, Rassie van der Dussen, Steven Smith