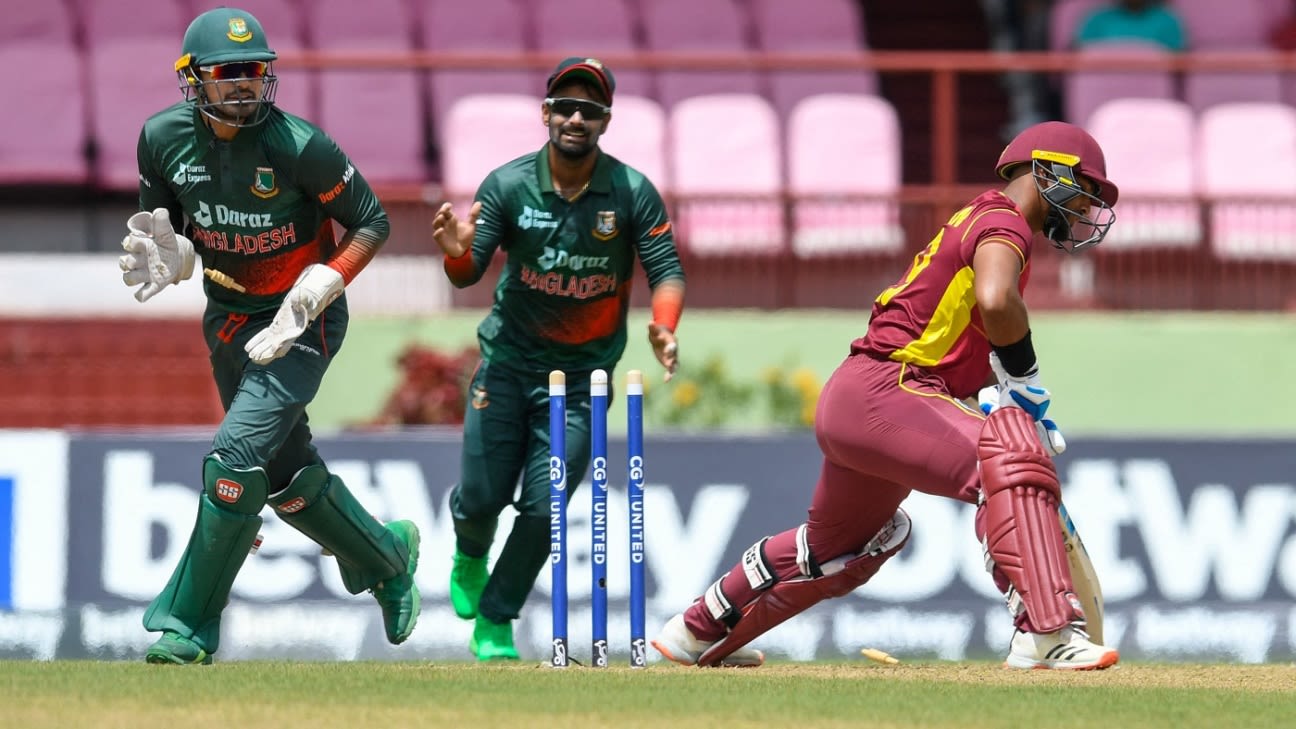 West Indies bowling coach Roddy Estwick believes the team shouldn’t lose confidence following the ODI series loss to Bangladesh, but instead have “open discussions” and “come up with solutions” for their problems against spin.
Bangladesh took an unassailable 2-0 lead in the series, and West Indies’ nine-wicket defeat in the second ODI was their second biggest at home in terms of balls remaining. It was also West Indies’ tenth consecutive loss to Bangladesh in this format, having lost the last four ODI series against them.
Related
“Just a week ago we were winning the Test and T20I series but we are 2-0 in the ODI series,” Estwick said. “We are obviously very disappointed but you have to try to lift the group. The key is to not allow the confidence to drain out of the group. We have to find ways to lift people, to have open discussions to come up with solutions. We are still planning for 2023. We know that teams will bowl spin against us. We have to get better at rotating the strike.
West Indies were routed for 108 in the second ODI and could only make 149 for 9 in the first, as Bangladesh spinners – specifically Mehidy Hasan Miraz – ran through the hosts’ line-up. In the second match, Keemo Paul, batting at No. 8, made their highest score of 25 not out. West Indies also started slowly in both the matches, playing out 89 and 88 dot balls in the first 20 overs of the first and second ODIs respectively.
“We didn’t adjust to the conditions,” Estwick said. “We struggled to get any momentum. We are very disappointed. We can’t make any excuses. We got bowled out inside 50 overs. It is a worry, a concern. Winning the toss doesn’t mean you will lose the game. We have to find a way to counteract these spinners. They have been causing us a lot of problems. The boys are trying, but it is very important to find a way to go forward. We got one more game to play. We continue to learn.
“We have to find out from Keemo Paul what he did differently than everyone else. We have to build from there. I thought Keemo Paul played really well in his cameo.”
Apart from Paul’s batting, another positive Estwick pointed to was left-arm spinner Gudakesh Motie’s bowling.
“In only his second ODI, he (Motie) understands the pitches, bowls wicket to wicket. You have to look at the positives. There are not a lot of positives but those two have been the standout so far.”
Estwick also observed that Bangladesh changed their usual plan of setting a total in ODIs, and instead chose to bowl first.
“I don’t want to be too critical. I thought this one (pitch) was better than the first game. There was a lot of moisture. There was a lot of rain around Georgetown, and the groundsmen can’t put in as much work.
“Bangladesh put us in both times they won the toss. Normally, Bangladesh likes to set a score to put you under pressure. They have gone away from that due to the surface.”
West Indies and Bangladesh play the third and final ODI of the series in Providence, Guyana on July 16.
Tags: Bangladesh tour of West Indies, Roddy Estwick, West Indies, West Indies vs Bangladesh