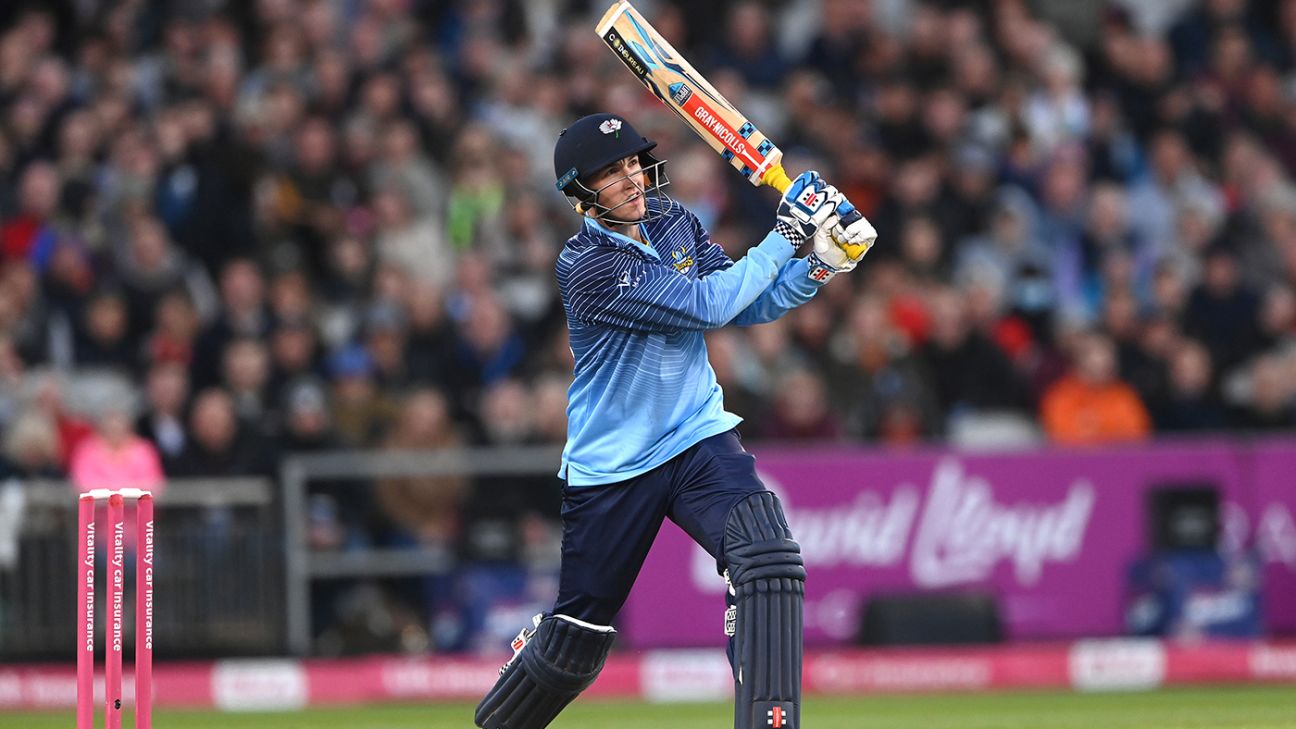 Yorkshire’s new regime have received the first show of faith they needed with Harry Brook and Dominic Leech both committing themselves to a long-term future with the club.
After a testing week, in which both David Willey and Tom Kohler-Cadmore have chosen to go elsewhere, the decision by two Yorkshire-born players to keep faith with the county during a difficult transition will lift spirits.
The news of the new contracts will be welcomed as a blessed relief – adding to the delight around Headingley over some of the best ticket sales in the ground’s history for a Test bedevilled by rail strikes and positive Covid tests.
The county is negotiating its way through the most challenging phase in its history after allegations of institutional racism and an unhealthy dressing-room culture.
It is inevitable that the Headingley Test will be the focus for more disruption – and four former chairmen, including the ex ECB chairman Colin Graves, have teamed up to publicly demand an independent enquiry into the ECB’s handling of racism allegations against Yorkshire.
Brook, who is currently in the Test squad and making a strong case to play for England in all three formats, will gain most attention by signing a five-year extension that will keep him at Headingley until at least October 2027.
Leech, a 21-year-old fast bowler, is less well known, but his promise is considerable. He made his debut in 2020 and will remain with Yorkshire until at least October 2024.
Yorkshire’s coaching team of Darren Gough, the interim director of cricket, and Ottis Gibson, the head coach, have clear views about their priorities as they seek to build a positive environment, and successful side, in the wake of the global fallout from Azeem Rafiq’s racism allegations. Both will be thrilled by the first sign that they build a successful future.
“We are absolutely delighted that they have both committed their futures to the club,” Gough said. “Harry is an incredible talent and the performances he has put in so far this year have been nothing short of incredible, rightfully earning him an England call-up.
“It’s clear that he has a very bright future and it’s great for the club to be able to secure his services for a long period of time.
“Dom is a highly regarded seamer and we are really excited to see what he can achieve over the next few years.
“Like most young fast bowlers, he’s had to cope with a few injuries in the early stage of his career but we are confident he has all of the attributes to be a brilliant cricketer for Yorkshire.”
Dominic Leech is a promising young seamer who has committed to Yorkshire until 2024•Getty Images
Brook has enjoyed a stellar rise to prominence. So far this season he has scored a remarkable 926 runs in 11 County Championship innings, alongside 282 Vitality Blast runs at an average of 47. His form was recognised with a call-up to the England Test squad for the New Zealand series, having made his T20I debut during the tour of the Caribbean in January.
He also skippered Yorkshire in their latest Blast fixture against Derbyshire at Chesterfield on Saturday.
Yorkshire’s mass sacking of their coaching and ancillary staff in December will be debated for decades. Cricket does not deal in such wholesale changes in the same way as football does. But they will hope that a pattern may now be set.
Most uplifting for Yorkshire was that the comments from both players appear to suggest a willingness to put recent political disruption behind them, perhaps even accepting it as the lot of a professional in team sport.
Brook said: “I’m delighted to extend my contract with Yorkshire and hope I can contribute to a lot of wins in the coming years. Yorkshire is my home club and I’d love nothing more than to help bring some silverware to Headingley.”
Leech said: “I’m really pleased to have signed a contract extension with Yorkshire and committed my future to the club. I’ve had a great taste of first-team cricket over the last few years and want to push for a permanent spot in all squads.
“I’ve enjoyed working with our new coaching staff and look forward to continuing to develop my relationships with them. It’s great that the club have recognised my performances and rewarded me with this contract. Hopefully I can play my part in the side winning some trophies.”
Tags: Dominic Leech, Harry Brook, Vitality Blast, Yorkshire