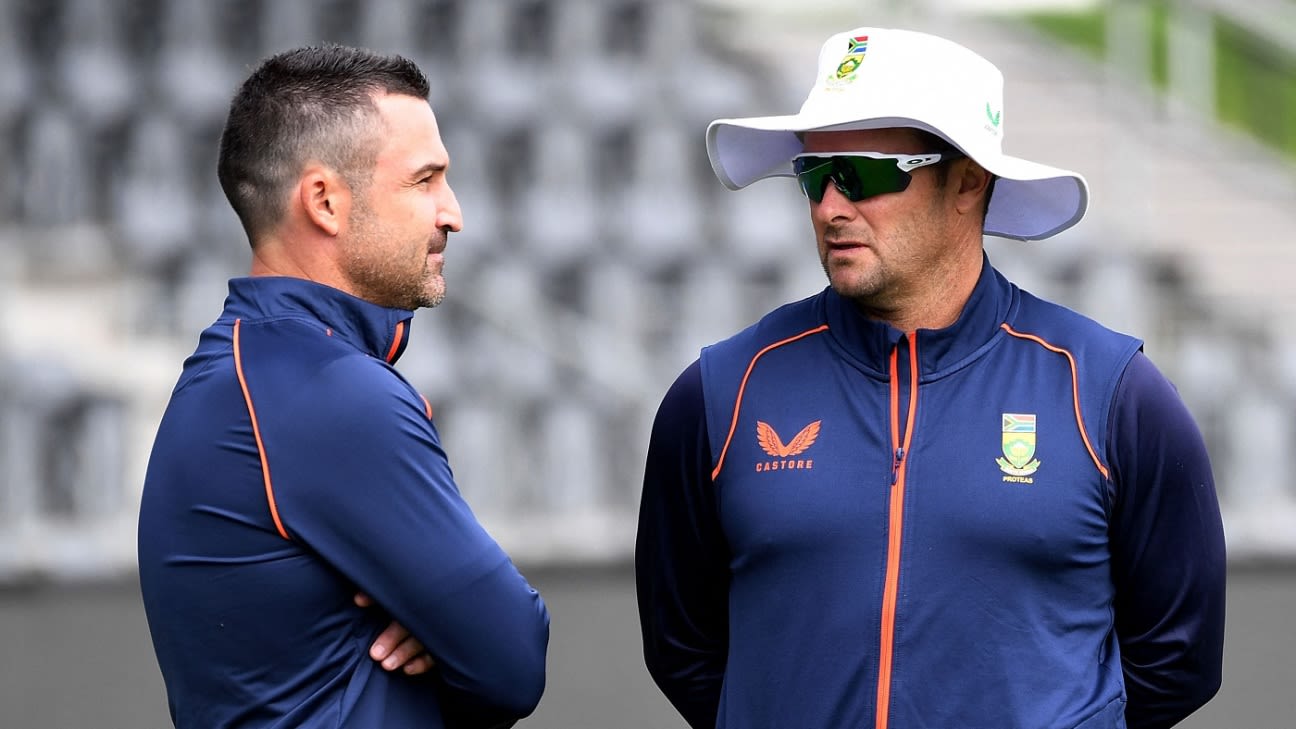 Mark Boucher, South Africa’s head coach, believes that other teams will try to play Test cricket using England’s new ultra-attacking approach after seeing their success under Brendon McCullum, but has cautioned that ‘Bazball’ may only work in favourable batting conditions.
England have chased fourth-innings targets in excess of 250 in each of their first four Tests since McCullum’s appointment and have scored at 4.6 runs per over so far this summer, making a conscious effort to put New Zealand and India’s bowlers under sustained pressure.
Related
That has been possible, in part, due to excellent batting pitches and a batch of Dukes balls that have gone soft very quickly, resulting in minimal lateral movement for bowlers after the first 20 overs of any given innings.
England’s next Test series starts on August 17 against South Africa. Speaking in Taunton ahead of his side’s first warm-up game since arriving in the UK, a 50-over match against England Lions on Tuesday, Boucher said he had been watching England play with great interest.
“It’s probably the way that red-ball cricket is going,” Boucher said. “If you look at the introduction of T20 cricket, the run-rates have increased in red-ball cricket. There’s going to be times where the conditions don’t allow you to play that way but if the conditions allow you to play that way, I’m sure that you’re going to see batting line-ups try and put bowlers under pressure.
“The conditions have allowed for England to play that way. That’s just about being smart and assessing conditions on the day. If you see a moment to really put the hammer down, we’ve seen how it can pay off, as England have shown us. I do think Test cricket is going that way.
“We know how Brendon played and we’ve heard the conversations around him when he was coach of KKR [Kolkata Knight Riders in the IPL] as well that he wanted to have this really aggressive style of play. It’s exciting to watch. I watched a lot of those games and England did really well.
“It’s probably a little bit of an advantage to us in a way to have seen and we can expect them to come out and play the same brand of cricket that they are playing. A couple of things you need to understand is that you need to have the right players in your team to be able to do that, and the conditions need to be favourable as well.”
Keshav Maharaj and Simon Harmer could play an influential role if the pitches dry out during the ongoing heatwave•AFP/Getty Images
Boucher was speaking on one of the first days of a heatwave in the UK, with temperatures due to pass 30 degrees Celsius this week and no rain forecast in the next two weeks, and said that he expects pitches to remain flat throughout the summer.
He cautioned that if the weather remains hot, pitches could dry out, bringing Keshav Maharaj and Simon Harmer into the three-match Test series which runs from mid-August to mid-September. The two spinners were South Africa’s biggest match-winners during their recent home series win over Bangladesh, sharing 29 wickets between them in the two Tests, at a combined average of 13.48.
“We’ve come to England now and every day has been hot,” Boucher said. “It’s been fantastic weather so the wickets have flattened out quite a bit. There are certain conversations that we’ll have in our dressing room to try and counteract their aggressive approach: we always speak about having a bit of aggression but being smart as well so that’s where our smartness is going to have to come into the equation as well.
“There is a bit of time still to go to sum up the conditions and see if the wickets get even flatter and maybe a bit drier as well – that can bring spin into the equation, and we feel we’ve got all those different aspects covered in our squads.”
Boucher was speaking for the first time since Enoch Nkwe, who resigned as his assistant coach last August citing “concerns about the functioning and culture of the team environment”, was appointed as CSA’s new director of cricket. He shut down questions suggesting that Nkwe’s return would be unsettling.
“Besides reports of the past, myself and Enoch have always had a very good relationship and we had a nice chat before we left [for England],” Boucher said. “I’m quite excited to work with him. I think he’s got some fantastic ideas.
“He’s been in the system for quite some time so he knows exactly what’s required. Enoch has already addressed that [the circumstances around his exit]. He said that the environment has changed and he’s happy with that situation.”
Tags: Brendon McCullum, Enoch Nkwe, ICC World Test Championship, Mark Boucher, South Africa, South Africa in England