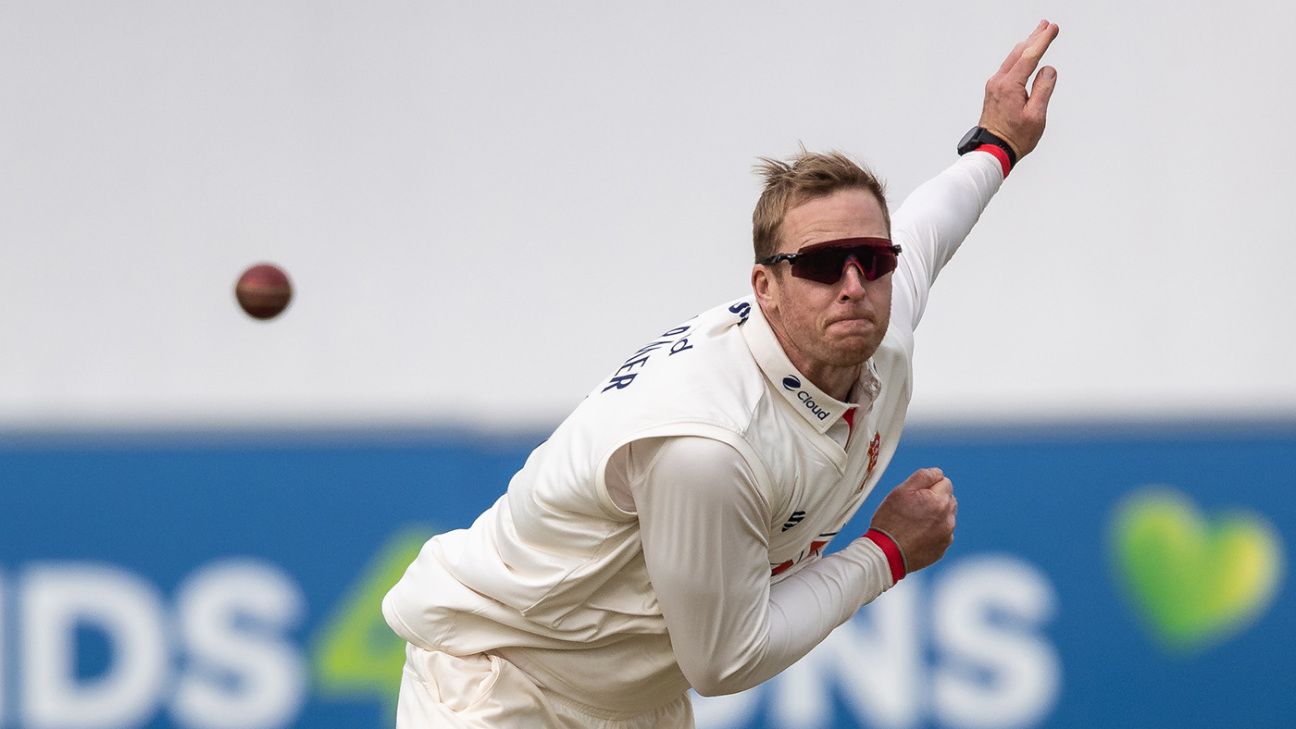 Gloucestershire 136 and 140 for 6 (Harmer 5-51) trail Essex 310 (Cook 145, Westley 90, Gohar 5-84) by 34 runs
Alastair Cook and Simon Harmer combined to leave Essex on the cusp of victory in their LV=County Championship match with Gloucestershire at Chelmsford.
Cook recorded his 31st first-class century for his county on his way to 145 out of 310 all out before off-spinner Harmer bagged 5 for 51 wickets as the visitors capitulated against the spin wizard.
Cook occupied the crease for almost seven hours as Essex and with skipper Tom Westley, who scored 90, provided a significant second-wicket partnership worth 196.
Trailing by 174 runs on first innings, Gloucestershire were flummoxed and confused by the wily Harmer who was introduced into the attack for the 6th over and by the close, had tantalised the visitors to the brink of defeat.
Ollie Price reached the close unbeaten on 42 and will resume with Zafar Gohar on 10 but winless Gloucestershire look set for another reverse.
Harmer’s first victim came in his third over when Marcus Harris was bowled and four balls later, he had Ryan Higgins picked up at bat/pad for a duck to leave the visitors 26 for 2
Although Chris Dent batted resolutely, he saw Miles Hammond and James Bracey fall to Harmer. Hammond bowled when he injudiciously went on the back foot before James Bracey reached forward and was stumped.
Then Dent himself fell to Harmer for 33 out of 77 for 5, leg before on the back pad to give Harmer his tenth wicket of the match.
Cook and skipper Westley had made serene progress during the morning session when they resumed on the overnight 127 for 1, just 9 runs adrift of their opponents.
With the 15th delivery of the day, a boundary by Westley moved Essex into credit and he and Cook increased the advantage with a series of nicely-timed and well-directed drives.
Westley’s penchant for an array of leg side strokes complemented the classic cover driving and square cuts executed by Cook as the partnership flourished.
There was a rare moment of anxiety though for Cook when he had scored 71 following the introduction of slow bowler Miles Hammond, the eighth bowler used by the visitors.
Hammond’s first delivery found the edge as Cook played forward but the ball escaped the clutches of Higgins at first slip to allow the Essex Knight of the Realm to continue to showcase his talent to his Chelmsford kingdom.
Gloucestershire were finally able to bring about a conclusion to the Cook-Westley alliance when Westley’s defence was breached by a beautiful delivery from Tom Price that nipped back to re-arrange off stump.
Cook arrived at three figures with his 12th boundary having faced 236 deliveries steering the ball backward of square on the off to earn a standing ovation from the crowd.
Shortly after the impressive Price struck again. Dan Lawrence was caught at short mid-wicket off an intended pull to give the paceman figures of 3 for 47 as Essex arrived at lunch on 222 for 3 at lunch and a lead of 86 runs.
Cook continued relentlessly but at the opposite end, his colleagues were being undone by left-arm spinner Zafar Gohar. He enjoyed a spell of 3 for 7 before Ryan Higgins tempted Cook to nibble outside off stump to be caught behind.
Adam Rossington clubbed a couple of sixes to book a third batting point before Zafar added two more wickets to return figures of 5 for 84 and his fourth five-wicket haul for his county.
Tags: Alastair Cook, County Championship Division One, Essex, Gloucestershire, Gloucs vs Essex, Simon Harmer