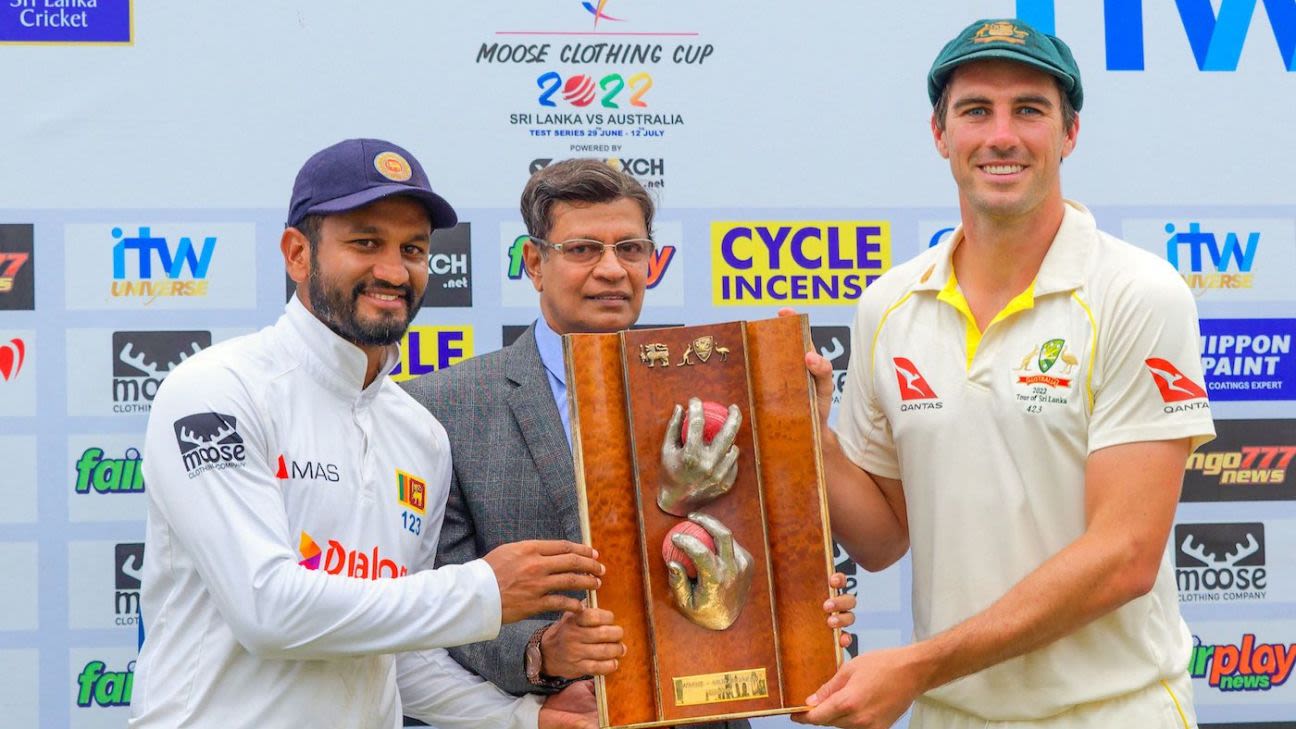 They won an attritional series in Pakistan, and dominated Sri Lanka in what was essentially a two-day win last week. But this loss in Galle, by an innings and 39 runs, might be a “reality check” for an Australia team intent on improving their long-form cricket in Asia.
So said captain Pat Cummins, after the second Test hurtled to a conclusion on the fourth evening – Australia collapsing to 151 against spin inside 41 overs.
“Some batters went out with a really clear plan, and you just get a ball with your name on it earlier than you would’ve liked,” Cummins said. “It’s a good reality check for people touring over here that it’s really hard. So many positives out of last week, that we did find methods that work. One small hiccup doesn’t mean you have to change everything. And it makes for more learning than after a win.
Related
“I think half our batting line-up and half our bowling line-up hasn’t played a lot over here in the subcontinent. So the experience on these two vastly different wickets [in the two Tests], I think we got a lot of lessons out of it to take to India next year.”
Cummins pointed to the second morning as a session in which Australia let the match slip. Although they had won the first day, ending at 298 for 5 at stumps, they then lost their last five first-innings wickets for 35 runs, finishing at 364 all out. This was after Steven Smith and Marnus Labuschagne had hit hundreds, and while Smith remained at the crease, the wickets fell at the other end.
“That was probably an opportunity missed. The way we set up the game on day one, we were hoping to get 400-plus, which history suggests here puts you in a really good position,” Cummins said. “Unfortunately none of us hung around with Smith long enough to get up to the 400-plus, which meant even if we were out there for 180 overs you were kind of level at the turn.”
Dimuth Karunaratne and Pat Cummins pose with the Warne-Muralitharan Trophy, which they shared•AFP/Getty Images
Australia’s second-innings collapse took less than two sessions, after they started 190 runs behind. Usman Khawaja and David Warner put on 49 to begin, suggesting the surface remained decent for batting. But then they lost 10 wickets for 101.
“Certainly as the game went on the footmarks started to react a bit more,” Cummins said. “A fresh bowling side always makes a bit of a difference as well. So it all happened pretty quickly, and unfortunately we were on the wrong side.
“The plan had been to just bat. It was still close to five sessions left in the game. I think if we were behind by just over 100 we were still in the game, but 200 probably put it beyond us. We were trying to bat for the rest of the day then come up with a plan for tomorrow.”
Australia’s tour has come in the backdrop of a crippling economic crisis and a major political crisis in Sri Lanka. Cummins and the Australia team have made efforts to reach out and understand the situation better, even making appeals for fundraisers. On day two of this Test, large protests were seen on the fort overlooking the ground, and at the central intersection at Galle, which is right outside the stadium.
“We’ve got protests round the ground, it really hits home how lucky we are to be travelling the world but also in some ways it’s more than just being here to play cricket, you can see the impact it can have. It hasn’t been lost on our group, something we speak about quite a bit.
“You couldn’t escape the protests on Saturday. We got lots of messages from back home, just saying ‘How is it? Hope you’re ok.’ And we felt totally fine.”
Tags: Australia, Australia in Sri Lanka, ICC World Test Championship, Pat Cummins, Sri Lanka vs Australia