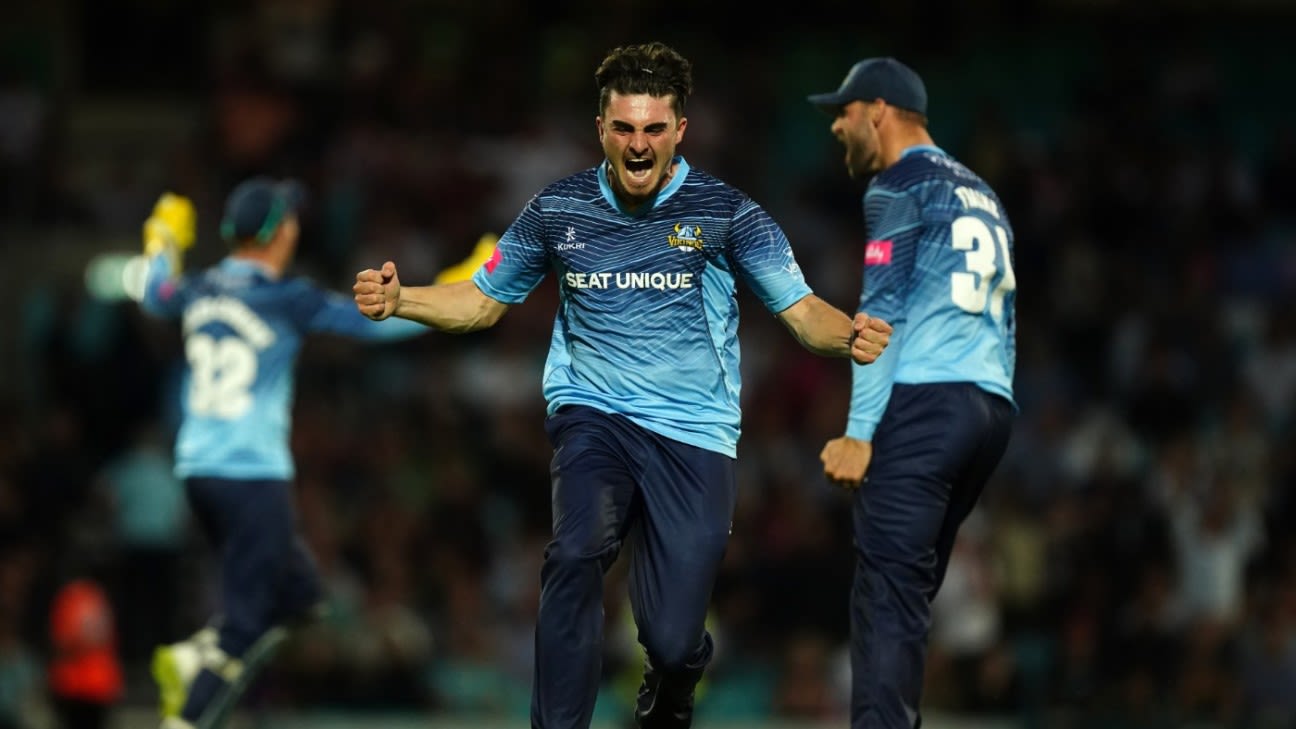 Yorkshire 160 for 5 (Kohler-Cadmore 62, Fraine 32*, Willey 30, Atkinson 2-28) beat Surrey 159 for 7 (Overton 40, Willey 2-26, Shadab 2-29) by 1 run
No, it wasn’t a case of mistaken identity when David Willey appeared at The Kia Oval wearing a Yorkshire team kit with Harry Brook’s name emblazoned across the back of his shirt. It was most certainly David Willey, the soon-to-be-ex-Vikings captain, ready to lead his side to Blast finals day with the most thrilling of wins over Surrey.
Willey was perhaps less ready just four hours earlier when he was released from England’s T20I squad preparing for Thursday’s series opener against India and was stranded in Southampton without his Vikings gear. Brook was possibly more expectant of making the dash up the M3 and so there was only one thing for it.
Willey had been critical of his side’s bowling after they lost their last two group games, and only scraped into the knockout phase thanks to Leicestershire’s points penalty for poor on-field discipline against Northamptonshire last week.
So it was fitting that their place at Edgbaston on July 16 came down to a smart, nerveless, compelling final over from Jordan Thompson, that went for just two runs and featured a wicket plus the crucial run-out of Jamie Overton, whose display of brute force went incredibly close to seeing Surrey through.
Coming in with his side 91 for 5 with six overs remaining, Overton thrashed 40 from just 21 balls, including four sixes to push his side to the point that they needed just five runs from the last over.
But Thompson took the ball and sent down a bouncer followed by two yorkers before his slower ball drew a hefty swing and a miss outside off stump from Overton. Wicketkeeper Tom Kohler-Cadmore, whose 62 had helped Yorkshire to 160 for 5 from a precarious 9 for 2, fumbled the ball and Overton set off for a run before turning back only to see Kohler-Cadmore, glove off, throwing down the stumps with a devastating direct hit.
Related
Overton, who had carried on his brilliant form with the bat after his 97 on Test debut against New Zealand at Headingley, kicked the ball away in fury as he walked off, his side now needing three runs off the last two deliveries.
Thompson then had Sunil Narine brilliantly caught by Will Fraine, wheeling in from the boundary at deep backward square leg, and it was down to Gus Atkinson to score three off the final delivery. A swing and a miss resulted in a bye and it wasn’t enough.
Fraine had an excellent outing, his unbeaten 32 coming in a handy 14-ball cameo to bump up Yorkshire’s total and he also took a good catch at fine leg to remove Tom Curran who shared a 55-run partnership with Rory Burns to help Surrey recover from 2 for 1 early in their pursuit.
Whatever the match was missing in star power – both sides were without several international players – it made up for with excitement, turning this way and that throughout the contest.
Willey, who had put on 93 runs for the third wicket with Kohler-Cadmore, struck in his first over to remove Will Jacks. Having been put down by Jonny Tattersall at backward point off the first ball of Surrey’s reply, Jacks tried to hit across the line of Willey’s sixth delivery and skewed his shot to Matthew Revis at third man.
Burns and Curran put their foot down in the fourth over, which went for 22 runs as they each helped themselves to a four and a six off Revis. But then Dom Bess applied the plug, conceding just two runs off the next over.
By the end of the powerplay, Surrey were 37 for 1, compared to Yorkshire’s 35 for 2, then Burns was bowled by Shadab Khan and the hosts were 57 for 2 in the ninth.
Ollie Pope, who had made the journey south from Edgbaston the day after England’s Test victory over India, fell cheaply and Curran followed off the bowling of Willey for a handy 36 off 28 balls.
Laurie Evans struck an assured 35 off 26 balls in the perfect support role to Overton who demanded all the attention, with three mammoth swings over the fence in the space of eight deliveries as Surrey scented victory.
Evans launched Willey for six and was then dropped by Tattersall at backward point in the 17th over as the pressure mounted. Revis, bowling the penultimate over, conceded just two runs from the first five balls before Evans launched him for another six setting up the enthralling final stanza.
Earlier, Jacks, standing in as Surrey’s captain for Chris Jordan who was with the England squad in Southampton, won the toss and chose to bowl first on a green pitch.
He opened the bowling and had Yorkshire in trouble from the beginning when they lost Adam Lyth, the competition’s fourth-highest run-scorer going into the match, spooning just the third ball straight to Overton, diving forwards at cover.
Finn Allen followed in the next over, skying Dan Worrall high above midwicket where Overton sat underneath it and already the visitors were two down with just nine runs on the board.
Kohler-Cadmore and Willey kept them afloat and Shadab added a neat 21 off 12 balls but it would all come down to the bowlers and this time they were up to the task.
Tags: David Willey, Jamie Overton, Jordan Thompson, Surrey, Vitality Blast, Yorkshire, Yorkshire vs Surrey