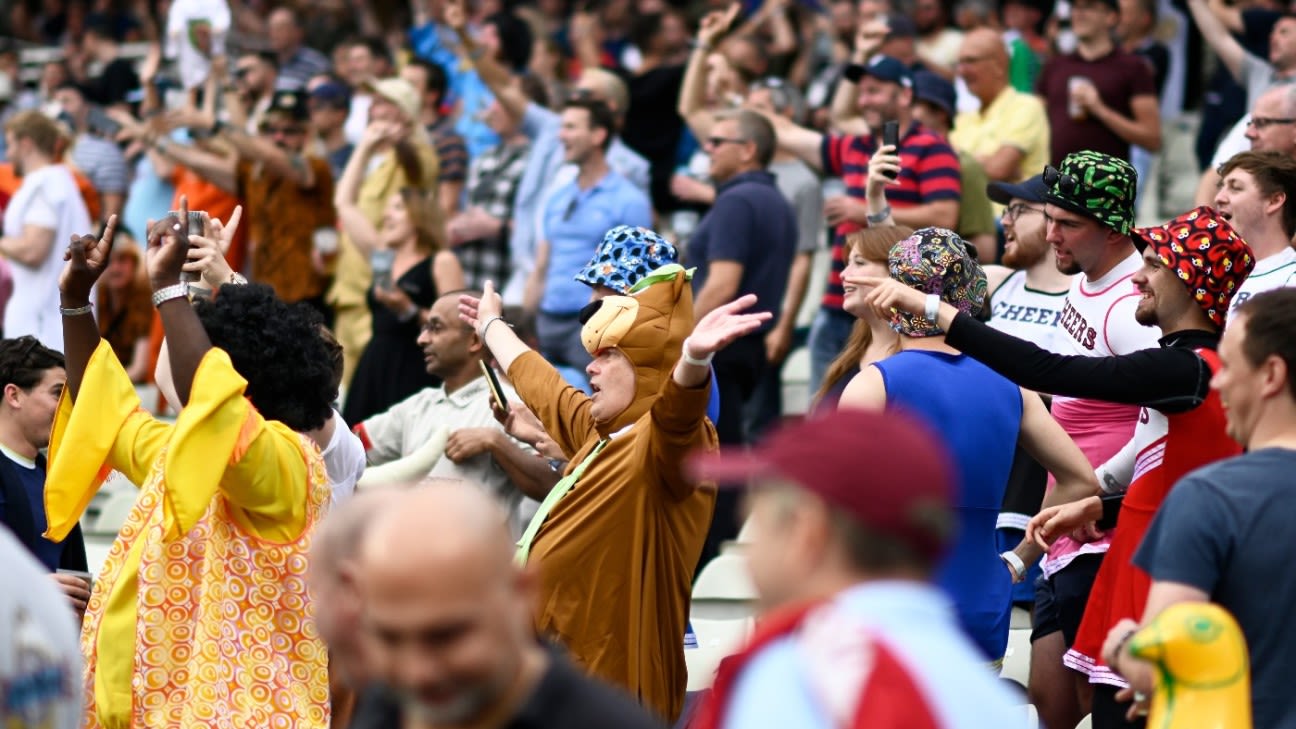 The ECB have insisted they are “committed to driving progress and increasing the reach” of the Vitality Blast after the competition’s 20th season saw a 15 percent decline in ticket sales compared to pre-pandemic numbers.
The Blast’s 2022 season concludes with Finals Day at Edgbaston on Saturday, which will be the competition’s earliest-ever finish. The Blast has been squeezed into a shorter window at the start of the summer in order to accommodate the month-long window for the Hundred, which starts on August 3.
Several counties were unhappy about their fixture lists, with many games taking place on week-nights during term-time, and ESPNcricinfo understands that the total attendance figure for the tournament will be around 800,000 – including a sell-out crowd at Edgbaston on Saturday.
That figure is down from around 920,000 in 2019, the most recent Blast season in which full crowds were permitted. The 2020 season was played behind-closed-doors in its entirety, while full crowds only returned for the knockout stages in 2021.
“After the impact of Covid and the restrictions that were in place for two summers, in addition to the changing consumer habits that has impacted other sports and entertainment, it has been heartening to see crowds returning up and down the country,” Neil Snowball, the ECB’s managing director of county cricket, wrote in a blog post.
“We are undergoing research to further understand the changing consumer habits and how we can develop the Vitality Blast’s offer to fans. What is certain is that there has never been more ways to watch and follow the Vitality Blast, whether it is at-venue or across the various digital platforms, and we’re committed to driving progress and increasing the reach of a competition that has become much loved since its inception in 2003.
“The Vitality Blast is a short-format competition unlike any other, partly due to age-old county rivalries that play out every year across the country. Over the years, all 18 first-class counties have established their own rich history in a competition that continues to attract top players from across the world and also provide a stage for homegrown players to develop their skills.”
Related
There has been controversy surrounding the non-availability of six England players for Finals Day in Joe Root, Jonny Bairstow, David Willey (all Yorkshire), Jos Buttler, Liam Livingstone (both Lancashire) and Craig Overton (Somerset), who will be playing in Sunday’s deciding third ODI against India instead.
The ECB were forced to reschedule the white-ball leg of the India series due to the postponement of the fifth Test last summer, prompting the clash between Finals Day and the end of the ODI series, but Tom Abell, Somerset’s captain, said that the occasion would not be “diminished in any way” by their absence.
“The Blast can still take pride of place,” Abell said. “If there are really good games in the Blast, that creates huge interest and excitement around the competition in itself. Everyone really buys in and you really see the passion for it. If you’re getting good sides playing against each other, that fuels the passion for the T20 Blast and for county cricket.”
Tim David, Lancashire’s overseas player, said it was “frustrating” to be without several England players. “Personally, I think it’s disappointing when you have clashes with international fixtures,” he said. “As a team, of course you want your best players available – but it happens everywhere. You have fixture clashes. I think it can be done better but I’m not going to offer any solutions at this stage.
“Obviously there is some really high-quality stuff happening in the Blast but there’s also some different challenges with the scheduling and the number of teams,” David added. “It’s a different intensity to other tournaments: guys will be off playing a four-day game and then the next day, they’ve got a T20 match. It’s certainly a different challenge to franchise tournaments.”
Five venues reported record T20 attendances this season: Edgbaston, Taunton, the Ageas Bowl, New Road and Grace Road, where Leicestershire reaped the benefits after deciding to cut their prices significantly midway through the group stages. “Last week’s quarter-finals attracted a combined 42,000 spectators – the most ever for the last-eight stage,” Snowball said.
The new TV deal signed between the ECB and Sky Sports this week includes a 50 percent increase in the number of televised group-stage games, as well as a weekly highlights show on free-to-air television. Snowball said that the deal “reiterates the value and importance that is placed” on the Blast and “reflects the loyalty and passion fans have for it”.
Tags: Tim David, Tom Abell, Vitality Blast